Surface tension is the ability of fluid surfaces to contract into the smallest possible surface area. Have you ever found that even after filling a glass full of water, you can only add a few more drops before it spills? Have you ever lost a thermometer and watched how the mercury reacts as it falls? All of which is caused by the surface tension of the surface. Its isolated surface behaves like a strong rubber membrane due to the suppressive force in the fluid molecules. As a result, the individual surface of the fluid is still in a state of stress and tends to have the smallest field. Thus, Surface Tension refers to the tension on the fluid’s individual surface. Let’s discuss more surface tension as:

Surface tension is described as the phenomenon that occurs when the surface of a liquid comes into contact with another phase (it can be a liquid as well). Liquids appear to have the smallest possible surface area. The liquid’s surface looks like an elastic sheet.

Imagine a line XY (as shown in the figure below) on the independent surface of the fluid in the equilibrium, then at every point on this line, the same force acts in its exact opposite direction. Every point stretched with the same force in both directions. 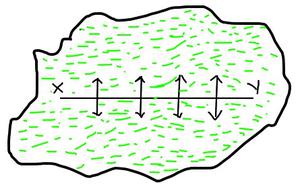 Thus, in the equilibrium, a force acting on any other per unit length of an imaginary line on an independent surface of the fluid, which is perpendicular to the line and in the direction of the tangent line of the surface, is called Surface Tension.

Surface tension is denoted by σ or T symbol.

Mathematically, the surface tension is defined as the force (F) acting on the surface and the length (l) of the surface, so is given as:

Also, the ratio of the work done (W) and the change in the area of the surface (A) is termed as the surface tension.

Cause of the Surface Tension

The effect known as surface tension is caused by the cohesive forces between liquid molecules. Since the molecules at the surface lack like molecules in both directions, they cohere more closely to those specifically aligned with them on the surface. This creates a surface “film” that makes moving an object across the surface more difficult than moving it while fully submerged. 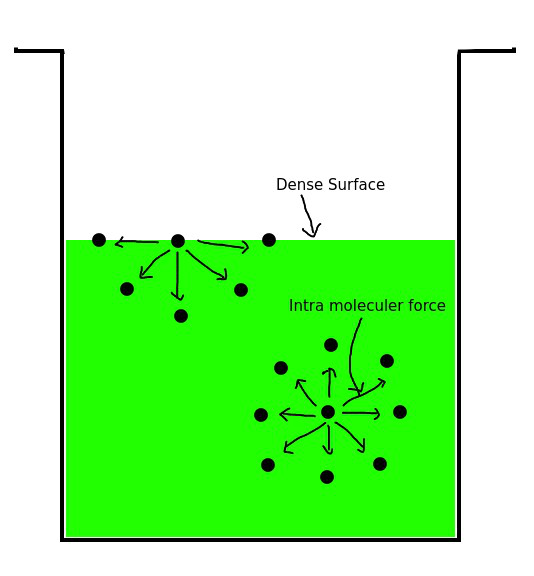 Assume a jar is filled with water; the water molecules can be found in two positions in this jar: First, beneath the water, and second, on the surface of the water. Since there are no molecules above these molecules, the molecules at the water’s surface are unbalanced. As a result, only the molecules below will be attracted. As a result, a thin crust will form on the liquid’s upper surface. Because of this thick layer, a form of stress is generated, which is known as Surface Tension. These phenomena can also be explained in terms of energy.

where T denotes surface tension and ΔA denotes an increase in surface area.

Therefore, the SI unit of surface energy is Nm-2 and dimensional formula is [MT– 2]. 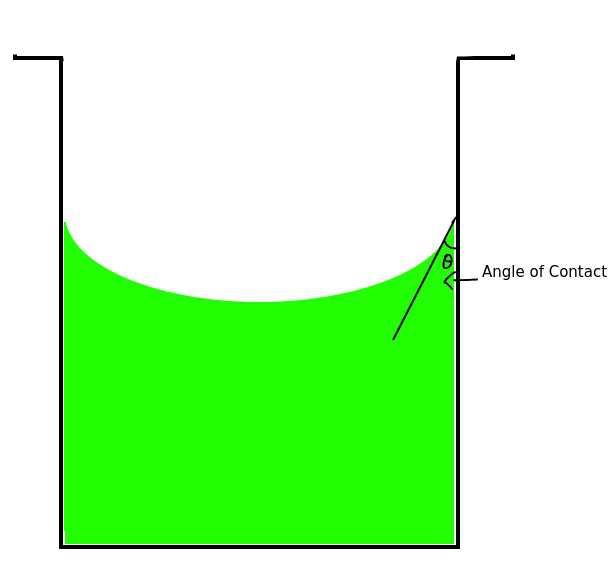 The angle of contact depends on the following factors:

Tendency of Fluids to Reduce the Surface Area 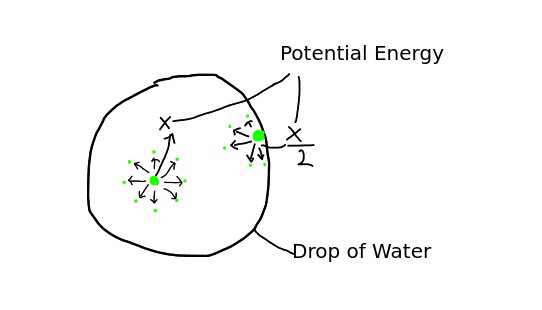 Suppose there is a bowl of water in which we dip the capillary tube, then according to figure we can see that there are two points on the surface of the fluid. One that is independent and one that is inside the tube. We see that the atmospheric pressure at A and B is P, but the pressure of fluid P0 at point B will be less than atmospheric pressure P. due to which the molecules of the fluid will go to the low-pressure part to balance the pressure, due to which the water in the capillary tube goes up as in figure 2. 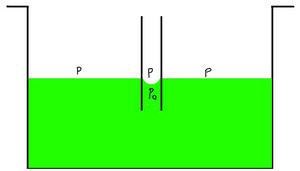 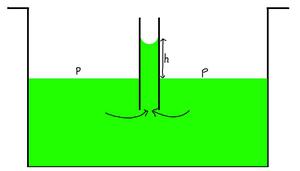 The difference between two pressures is, P – P0 = 2T/R

Let’s assume the height of rises water is h then the equation will be as follows:

where T is the surface tension, θ is the angle of contact, ρ is the radius of the capillary tube, r is the density of water and g is the gravitational acceleration.

Problem 1: Why soap is helpful in cleaning clothes?

Soap reduces the surface tension of water.  So water penetrates into small areas of clothing and removes stains. So soap is helpful for washing clothes.

Problem 2: Why do we use Toothpaste to clean teeth?

Toothpaste froth reduces surface tension. Hence, it clears the teeth by failing over a large area of teeth.

Problem 3: Why are small drops of mercury flat and big drops flattened?

Problem 4: Why do clothes get cleaned faster in warm water instead of cold water?

On heating the water, its surface tension is reduces, due to which it spreads clothes in more area than cold water and cleans clothes.

Problem 5: Why do we use Dettol to wash wounds?

The surface tension of water is reduced due to which is penetrates the small cracks of the wound and cleans the wound.

Previous
Latent Heat
Next
Estimating Limits from Graphs
Related Articles
1. Tension Force Formula
2. The Moon - Facts, Phases, Surface, Eclipse
3. Surface Charge Density Formula
4. Surface Energy Formula
5. How to calculate the Surface Area and Volume of a Torus?
6. Reflection of Light at Plane Surface
7. What are Chain or Multiple Stores?
8. What are Departmental Stores?
9. Public Deposits: Advantages and Disadvantages
10. What is Internal Trade?
Article Contributed By :