2.It is a global scope when declared within the browser. However, any variable defined within a node.js file is accessible only within that file.

3.TextDecoder: It is an implementation of the WHATWG Encoding Standard TextDecoder API. 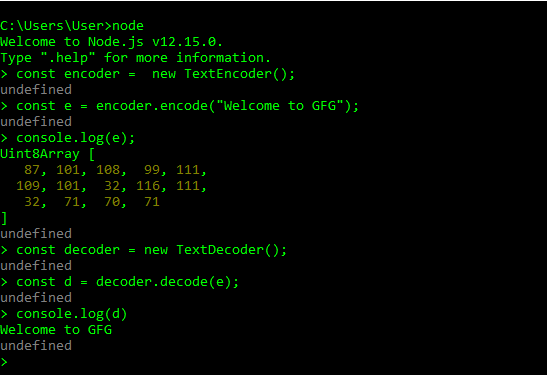 4.Class: URL The URL class instance is a global object and is implemented by the following WHATWG URL Standard. The URL constructor creates a new URL object as shown below. /foo is the input and https://www.helloworld.og/ is the base value.

6.WebAssembly: The global object that acts as a namespace for all W3C WebAssembly related functionality. WebAssembly is a low level Assembly-like language that can be run on modern browsers.

The following variables might appear to be global but actually exist only within the scope of some modules.

My Personal Notes arrow_drop_up
Previous
Node.js | NPM (Node Package Manager)
Next
Node.js Modules
Recommended Articles
Page :
What are the global objects of Node.js ?
05, Oct 21
How to remove all Global Modules in Node.js ?
30, Jun 20
Global, Process and buffer in Node.js
16, Jul 20
What is global installation of dependencies in Node.js ?
18, Jul 21
How the single threaded non blocking IO model works in NodeJS ?
04, Feb 21
Nodejs | GM solarize() Function
14, Apr 20
Email Verification using OTP in NodeJS
19, Feb 21
NodeJS process.nextTick() Method
05, Mar 21
How to make to do list using Nodejs ?
31, Jan 22
How to kill all processes in NodeJS?
28, Mar 22
How to Deploy Contract From NodeJS using Web3?
27, May 22
Create Newsletter app using MailChimp and NodeJS
31, May 22
Article Contributed By :