Measurement of Area, Volume and Density

When Humans look at their childhood pictures, the first thing they realize is how tall or heavy they have become as compared to the early stages of their lives. Noticing the increment in the weight or becoming taller is done through measurement. Measurement is required everywhere in order to specifically compare a quantity’s value from its original value. There can be many examples where measurement is required, For example, a thermometer is used to measure the temperature in Celsius of the body, the clocks on the wall are used to measure time in hours, and so on.

Normally, objects are measured by placing them next to each other, and it can be explained which one is heavier or taller, etc. Measuring an object gives two results- value and unit of the quantity. For example, The length of the scale is 15 cm long where 15 is the value and the centimeter is the unit used for length.

Metric system is the system that came from the decimal system and this system is used to measure basic quantities, metric system paves the way for the conversion of units, that is, the conversion of bigger units into smaller and vice-versa is possible due to the system. The basic quantities that are present are meter, gram, and liters, and they are used to measuring quantities of length, volume/mass, and capacity.

The volume of any quantity is three-dimensional in nature, that is, the length if going in three directions, unlike length or area, the volume contains capacity. The standard unit used to measure volume is meter3. The unit is converted into bigger and smaller units like decimeter3 or kilometer3 based on how big or small the quantity is, it is done by simply dividing/ multiplying by tens, hundreds, thousands, and so on. 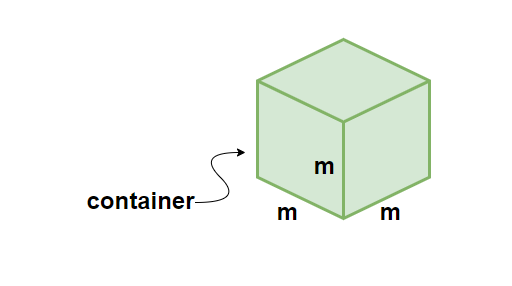 The density of any object is defined as the mass of that object per unit volume. Density tells how close or far away molecules are packed in a certain volume. The very famous scientist known as Archimedes discovered the concept of the Density of an object. In the metric system, Density is measured in kg/m3 and is represented as D or ρ. Therefore, it can be denoted as,

The conversion of the above-mentioned quantities are as follows,

Question 2: What is the difference between the metric system and the imperial system of measurement?

Question 3: Calculate the density of an object having a mass of 1200kg and its volume is 10m3.

Density of an object is given as,

Question 4: There are two large boxes filled with biscuits. The first has 10 biscuits and the second has 20 biscuit packets present in it. The box have the same volume. Explain which box will weigh more?

The concept is based on density. Density of an object is defined as mass/volume. Here, both the boxes have equal volume but the mass of the second box is more as it contain twice as many biscuits as first box. Hence, the second box will weigh more.

Question 5: A cube is given which has a volume of 1000m3. Calculate the surface area of the cube in cm3.

where a is the length if the side of cube

Question 6: The length and the breadth of a cuboid are same, but the height is twice in value. If the volume of the cuboid is 54000m3, find the length, breadth and height of the cuboid in centimeters.

Let the length and breadth be z, then the height will be 2z

Question 7: A cm scale has a limit of 15 points, how long is the scale in meters?

Hence, a 15cm long scale has a length of 0.15m in International System of Units.