Digital logic circuits can be classified into “combinational” and “sequential”. A combinational logic circuit is one whose output solely depends on its current inputs. sequential circuits, on the other hand, are built using combinational circuits and memory elements called “flip-flops”. These circuits generate output that depends on the current and previous states. A Digital logic (or Switching) circuit has voltage levels to be switched from one value to another but has a finite number of distinct values (generally 0 for false and 1 for true). These circuits operate a definite set of logic rules so it is also known as Logic circuits. These are basic circuits that are used in mobile phones, calculators, computers, etc.

Types of Logic Circuits: There are two types of Digital circuits depending on their output and memory used: 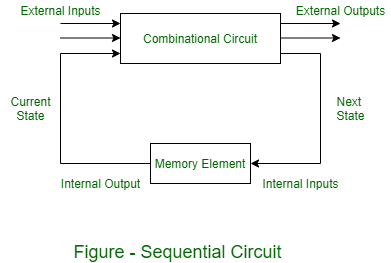 Generally, there are two types of storage elements used: Latches, and Flip-Flops. Storage elements that operate with signal levels (rather than signal transitions) are referred to as latches; those controlled by a clock transition are flip-flops.

Another major difference between the combinational and sequential circuits is the feedback mechanism.