A View is defined as the user interface which is used to create interactive UI components such as TextView, ImageView, EditText, RadioButton, etc., and is responsible for event handling and drawing. They are Generally Called Widgets. 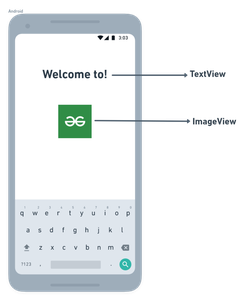 A ViewGroup act as a base class for layouts and layouts parameters that hold other Views or ViewGroups and to define the layout properties. They are Generally Called layouts. 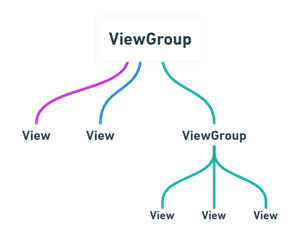 The Android framework will allow us to use UI elements or widgets in two ways:

Use UI Elements in the XML file

Here, we can create a layout similar to web pages. The XML layout file contains at least one root element in which additional layout elements or widgets can be added to build a View hierarchy. Following is the example:

Load XML Layout File and its elements from an Activity

When we have created the layout, we need to load the XML layout resource from our activity onCreate() callback method and access the UI element from the XML using findViewById.

Here, we can observe the above code and finds out that we are calling our layout using the setContentView method in the form of R.layout.activity_main. Generally, during the launch of our activity, the onCreate() callback method will be called by the android framework to get the required layout for an activity.

We can create or instantiate UI elements or widgets during runtime by using the custom View and ViewGroup objects programmatically in the Kotlin file. Below is the example of creating a layout using LinearLayout to hold an EditText and a Button in an activity programmatically.

Different Attribute of the Layouts