Here is a cipher algorithm, based on hexadecimal strings that is implemented by XORing the given plaintext, N number of times where N is its length. But, the catch is that every next XOR operation is done after shifting the consecutive plain text entry to the right. A sample operation is shown below : 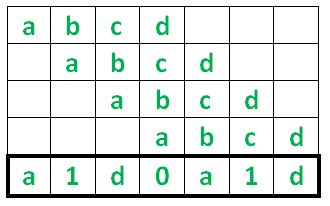 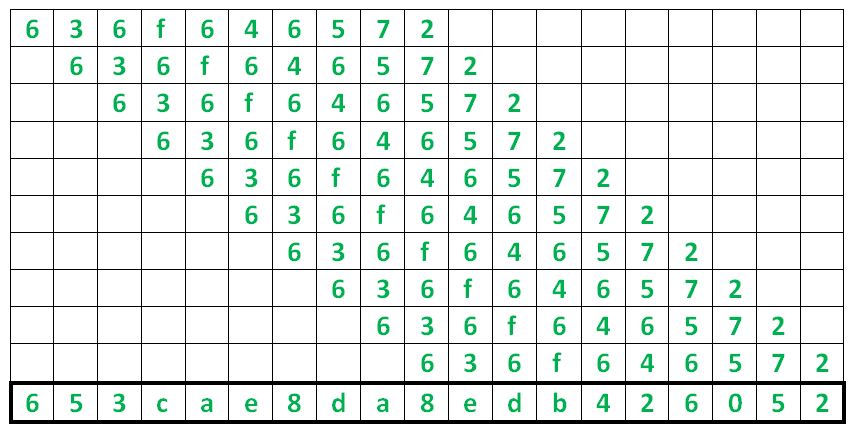 653cae8da8edb426052 is the hexadecimal text. So, the problem statement is to create a decryption algorithm (in any programming language) and deduce the plain text from the given hexadecimal string. Examples :

Approach : The key ingredient in encrypting and decrypting is in the properties of XOR. XOR is a bitwise operation where the result is 0 if the two possible inputs are same but 1 when the inputs are different. The XOR table is given below for reference :

An important and useful property of XOR that is widely popular in cryptography is that in case of multiple XORing of numbers (say M numbers), if we know only the M – 1 numbers (one is unknown) along with the XOR result then, we can easily calculate the missing number by XORing the known numbers and the XOR result. This property is discussed with the following hexadecimal numbers :

We shall be using the above listed property the most in course of this problem. Now, if we look at the encryption diagram of ‘abcd’ at the base it is just the repeated XORing of the digits. The rightmost digit is d and the rightmost digit of the ‘abcd’ is d as well so the last digit of both plaintext and hexstring is the same. The next digit is 1 which is calculated by XORing the second right digit of abcd and the previous digit i.e. 1 = d ^ c using the property we know the plain text digit can be deduced as d ^ 1 = c. Similarly, the next digit is a which is found by d ^ c ^ b = a. We only need to do this till the half of the hex string as the rest is symmetrical so they are not required.