‘Opposites attract,’ as the saying goes. You’ve probably heard this phrase a lot. But what is it that makes opposites attract? Where did this term come from? This expression is derived from the magnet and its magnetic field. A magnet’s opposing poles attract one other. In reality, shouldn’t opposing poles repel and like poles attract? Isn’t that right? ‘No,’ you say. So, let us put your theory to the test.

Magnetic fields are formed or produced when an electric charge/current flows near a magnet. Subatomic particles having a negative charge, such as electrons, travel about, producing a magnetic field. These fields can emerge from the atoms of magnetic objects or from electrical cables or wires.

A bar magnet pulls iron things to its poles, which are the ends of the magnet. The north pole is at one end, while the south pole is at the other. Magnetism is a phenomenon induced by the force exerted by magnets, which produces fields that attract or repel other metallic objects. It occurs as a result of electrically charged particles. The force acting on electrically charged particles in a magnetic field is determined by the amount of the charge, the particle’s velocity, and the strength of the field. According to magnetism:

When two bar magnets are brought close together, the like poles repel each other while the unlike poles attract.

The magnetic field is the space or region around a magnet in which magnetic force is applied on another magnet.

The magnetic field can be represented in a variety of ways. It may be represented mathematically as a vector field that can be displayed as various sets on a grid. Another method is to utilise field lines. Lines link the vectors in the set. Magnetic field lines never cross one other and never come to a halt here. 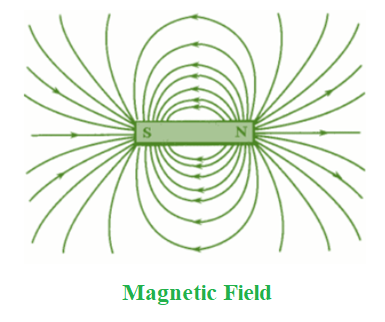 The magnetic field is measured by determining its intensity and direction. The measurement is required because each magnetic field differs from the others. Magnetic field intensity varies from tiny and weak to extremely powerful and huge. When we look at the Earth’s magnetic field, we can see that it is faint yet significant.

Nonetheless, the word magnetic field refers to two distinct but related fields, represented by the symbols H and B. H is the magnetic field strength and is measured in amperes per metre, the SI unit. Meanwhile, B denotes magnetic flux density and is expressed in tesla.

Field lines are another method to display the information contained inside a magnetic vector field. Magnetic field lines are fictitious lines.

Magnetic field lines are a type of visual representation of magnetic fields. They describe the magnetic force direction on a north monopole at any particular point.

The magnitude of the field is indicated by the density of the lines. For example, at the poles of a magnet, the magnetic field is stronger and denser. It becomes weaker as we go away from the poles, and the lines become less thick.

The magnetic force is the attraction or repulsion force that exists between electrically charged particles as a result of their motion.

The magnetic force between two moving charges is defined as the force imposed on one’s charge by the magnetic field generated by the other. This force is responsible for magnets attracting or repelling one another.

A compass, a motor, the magnets that keep things on the refrigerator, railway lines, and new roller coasters are all examples of magnetic force. A magnetic field is created by all moving charges, and the charges that travel across its areas experience a force. Depending on whether the force is attractive or repulsive, it might be positive or negative. The magnetic force of an item is determined by its charge, velocity, and magnetic field.

Force on a moving charge

A charge will feel a force if it travels at an angle across a magnetic field. The equation is:

A force acts on the motion of charge q travelling with velocity v in a magnetic field, and this force is:

The Right-hand rule can be used to determine the force direction (F).

It refers to devices that create currents by moving in a magnetic field. 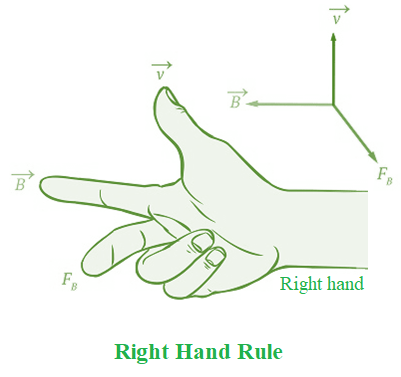 Question 1: What is the magnetic force of 40 C charged particles travelling at 5 m/s in a magnetic field of 2 T? Its field’s direction is the same as the route of the second particle.

Because the second particle’s route difference is the same as the direction of its field, θ =0°

Hence, the magnetic force of charged particles is 0 N.

Question 2: What exactly is magnetic force?

The magnetic force between two moving charges can be defined as the impact of one charge’s magnetic field on the other.

Question 3: What is the significance of magnetic flux lines?

Magnetic flux lines are significant for the following reasons:

Yes, magnetic fields exist in space. Based on observations of a large number of pulsars and the polarisation of their radio waves, the spiral arms of the Milky Way appear to contain a very large-scale structured magnetic field. Magnetic fields have been discovered in interstellar dust clouds. The fields are magnified when the clouds collapse.

Question 5: What is the source of the Earth’s magnetic field?