By watching some very common optical phenomena that surround or occurs around us, we may conclude to the point that the light rays seem to travel in straight lines. Sometime in the twentieth era, the popular wave theory of light often became slightly inadequate or irrelevant for cases of the interaction of light with matter, and light often behaves somewhat or closely like a stream or system of particles. This discussion and arguments about the true nature of light continued for years-long till a modern quantum theory of light came, finally in which light is neither having a ‘wave’ nor a ‘particle’ in nature – the new theory intends to relate the particle properties of light with the wave nature of it. The refraction of light travelling through different media is explained briefly and easily using the straight-line propagation of light rays in this article. 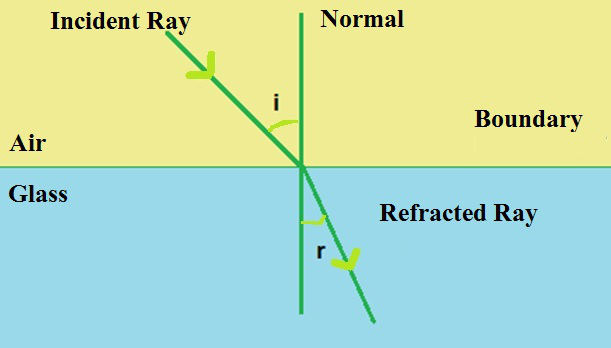 Refraction through two different media or mediums is shown above. The light ray has changed its path on travelling from air to glass, and it will again change when vice versa occurs.

There are given two laws of refraction as stated below which at the sight of refraction the light follows and what we see is the refracted image formed of the object.

The refractive index is of two types:

Upon travelling from a rarer medium to denser the light rays tend to bend towards the normal and if it travels from denser to rarer then it bends away from the normal at the point of incidence.

The speed or what we say the velocity of light in a vacuum is 3 × 108 m/s. Its speed in air is also almost the same as that in vacuum with a minimal difference. Hence, when travelling from air to the medium the speed is taken to be 3 × 108 m/s only. The absolute refractive index as the name suggests gives us a rough estimate of the optical density of the given material. 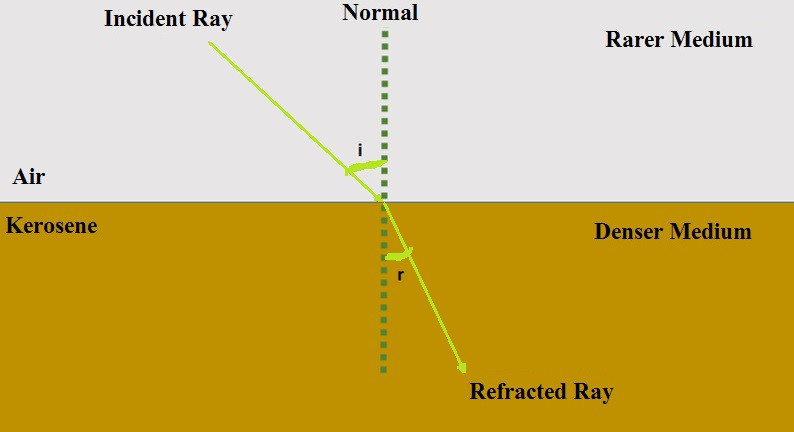 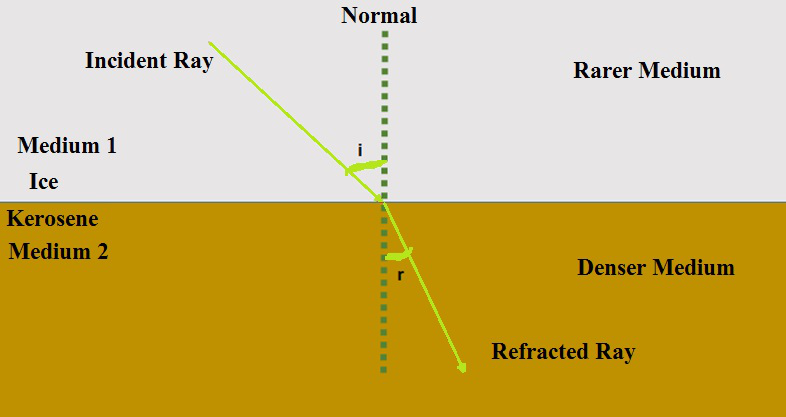 Question 1: What is the constant value if the angle of refraction is given to be 15° and the angle of incidence is 32°?

Hence, the constant for the above given values is 0.84.

Question 2: What is the value of the sin of the angle of incidence if the angle of refraction is given to be 35°? The constant is assumed to be 1.34.

Question 3: What is the constant value if the angle of incidence is 45° and the angle of refraction is given to be 30°?

Question 4: Calculate the speed of light in water and also in ice. The absolute refractive index of ice is 1.31 and water is 1.53. In which medium is the speed highest?

Therefore, the velocity of light is greater in case of ice than in water.

Question 5: Calculate the speed of light in benzene. The absolute refractive index of benzene is 1.50.

As we know we can calculate the refractive index by the following formula,

Question 6: The velocity of light in kerosene is 2.08 × 108 m/s and in water is 1.96 × 108 m/s. By referring the given values calculate or find the refractive index of the kerosene with respect to water medium.

Hence the refractive index ratio of kerosene in respect to second medium water is 0.94.

Hence the refractive index of glass with respect to water is 1.005.

Hence, the refractive index of glass with respect to kerosene is 1.05.