A mirror is a reflective surface that reflects light and creates a real or imaginary image.

When an object is placed in front of a mirror, the mirror reflects the image of the same object. The incident rays are coming from the object, and the reflected rays are what produce the image. The classification of the images as real or virtual depends on where the light rays intersect.

The two types of mirrors that are most commonly used are:

The most typical mirrors are flat and are referred to as “plane mirrors.” A fine layer of silver nitrate or aluminum is deposited behind a flat piece of glass to construct plane mirrors.

When a light beam strikes a plane mirror, the light ray is reflected in such a way that it makes an equal angle with the incident ray that is, the angle of reflection is equal to the angle of incidence.

The curved surface we see of a shining spoon can be considered a curved mirror. The most widely used type of curved mirror is the spherical mirror.

If a hollow sphere is cut into some parts and the outer surface of the cut part is painted, then it turns out to be a mirror with its inner surface as the reflecting surface. This makes a concave mirror.

A concave mirror or converging mirror is a type of mirror that is bent towards the inwards side in the middle. Moreover, by looking in this mirror, we will feel that we are looking in a cave. We tend to use the mirror equation to deal with a concave mirror.

Image Formation by Concave Mirror and their ray diagrams

When the object is placed at infinity

As the parallel rays from the object converge at the principal focus, F of a concave mirror; after reflection through it. Therefore, when the object is at infinity the image will form at F. 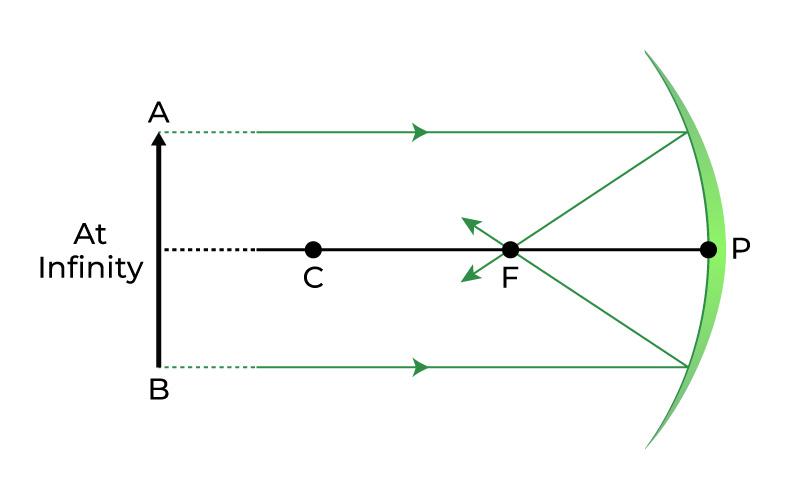 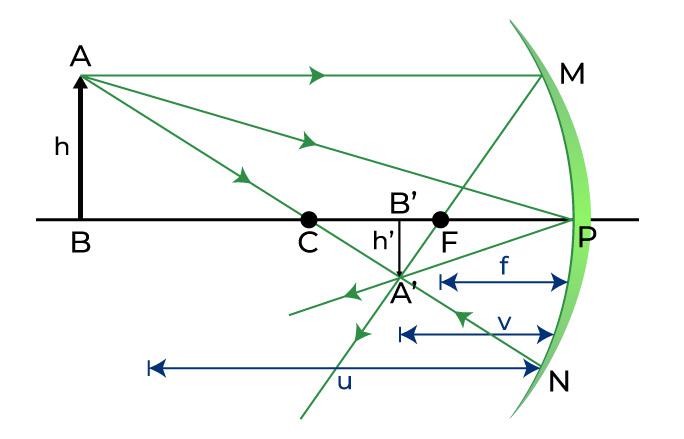 Properties of image: It is diminished as compared to the object and also real and inverted.

Object at Centre of Curvature (C)

Whenever we place our object at the center of curvature (C) of a concave mirror, we get a real and inverted image formed at the same position. 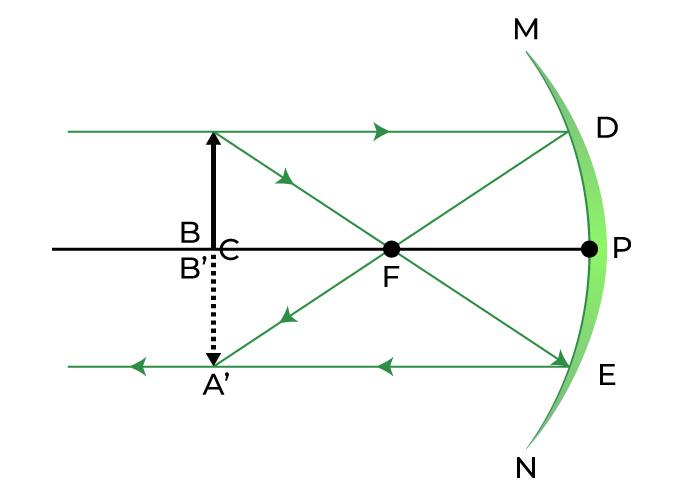 Properties of image: It is of the same size as the object and also real and inverted. 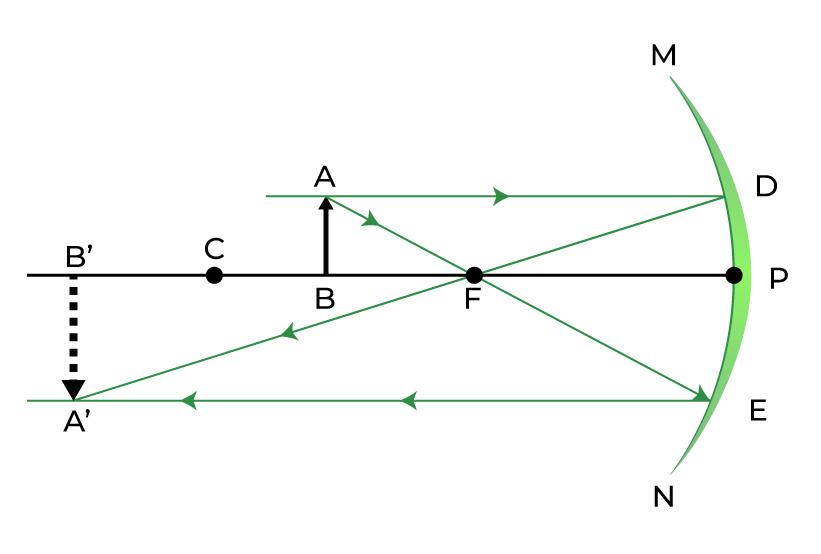 When the object is placed at the principal focus (F) of a concave mirror, a highly enlarged image of the object is formed at infinity. 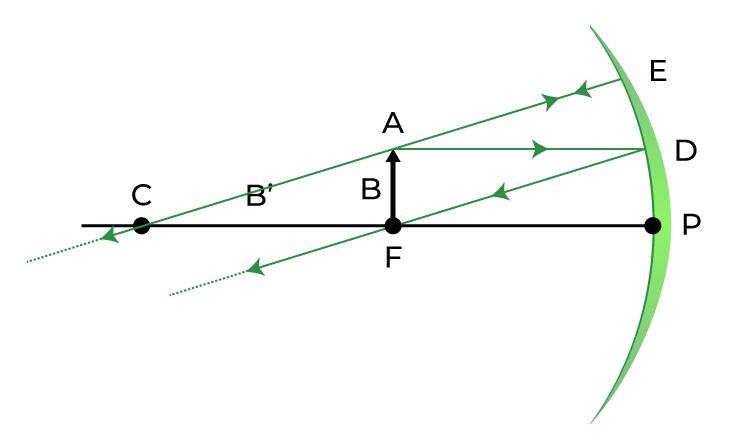 Properties of image: Highly enlarged image, its nature is real and inverted

The object between Principal Focus (F) and Pole (P)

When the object is placed anywhere between the principal focus and the pole of a concave mirror, we get an enlarged, virtual and erect image formed behind the mirror. 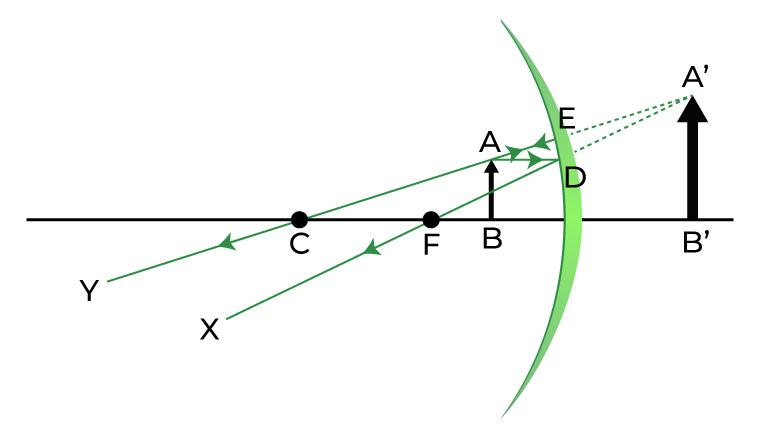 The back of the mirror is shaded so that reflection only takes place from the outward bulged part. The surface of the spoon which bulged outwards can be assumed to be a convex mirror.

It is also known as a diverging mirror as the light after reflecting through its surface diverges in many directions but appears to meet at some points where the virtual, erect image of diminished size is formed.

Image Formation by Convex Mirror and their ray diagrams

Whenever the object is kept at infinity, we observe that a point-sized image is formed at the principal focus behind the convex mirror. 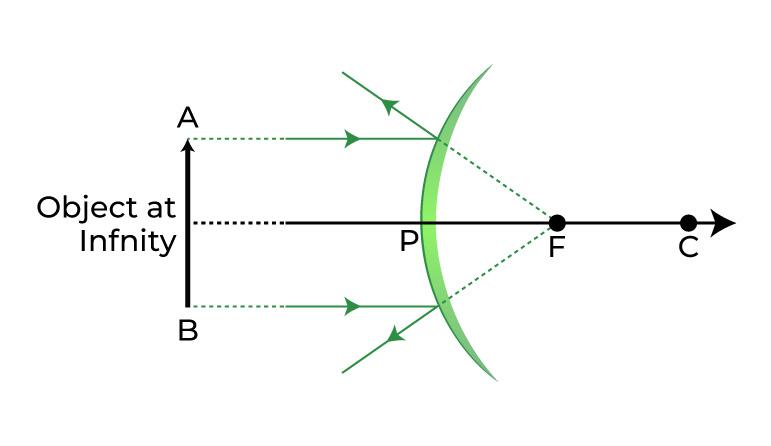 Properties of image: The image formed is highly diminished in size, virtual and erect

Object is kept between infinity and the pole

Whenever the object is kept anywhere between the infinity and the pole of a convex mirror, then we get a diminished, virtual and erect image formed between the pole and focus behind the mirror. 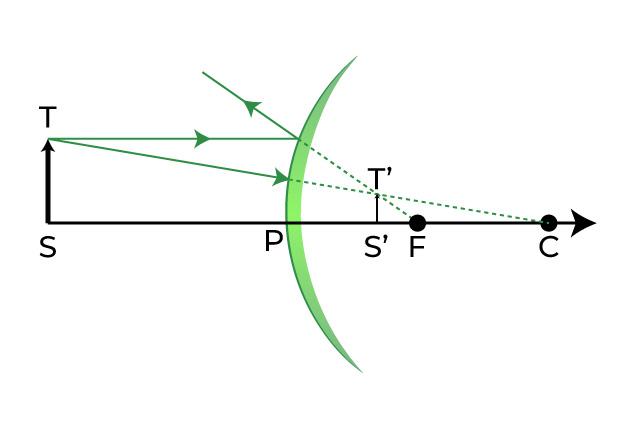 Properties of image: The image formed is diminished in size as well as virtual and erect.

To do the sums related to the spherical mirrors, the formula used is known as the mirror formula. It is used to calculate the focal length, image distance, object distance, and also magnification or any other thing required. We usually put the formula first and then put the signs so as to do the sums to minimize any error which can be generated.

The sign conventions which are to be followed while using the mirror formula are fixed so from the above-given diagram we can easily put the signs according to the requirement to get the required result.

The formula is given below, 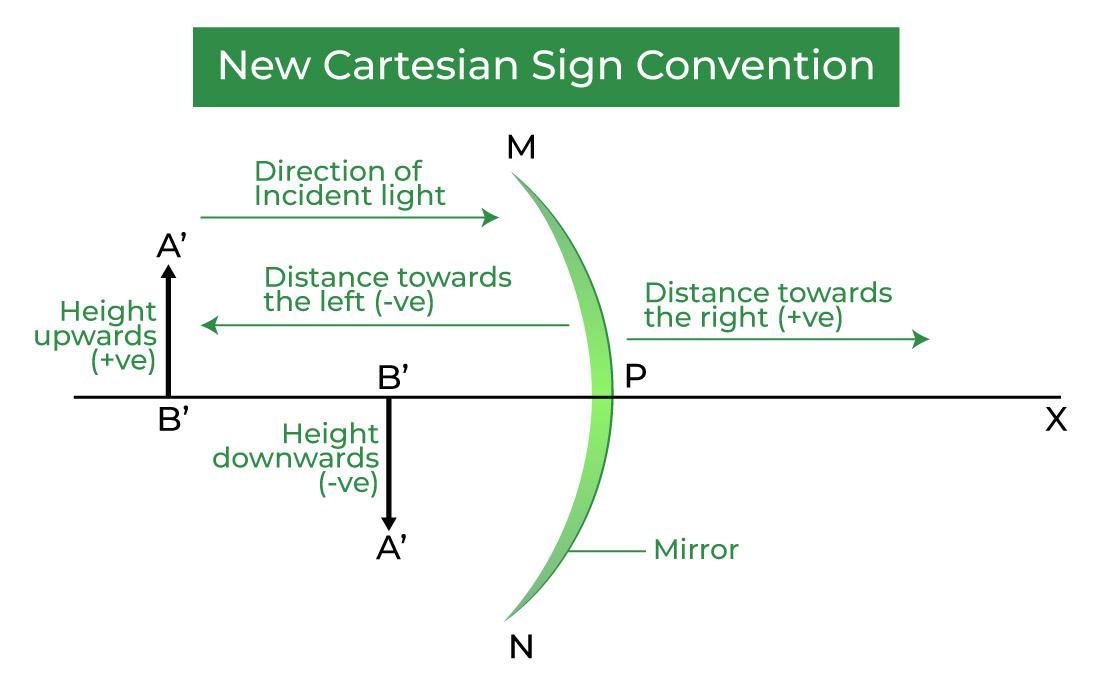 Example 1: What is the image distance in the case of a concave mirror if the object distance is 4 cm? It is given that the focal length of the mirror is 2 cm.

Where u= object distance= -4cm 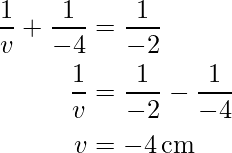 Hence the object is located 4 cm in front of the mirror.

Example 2: What is the image distance in the case of a concave mirror if the object distance is 32 cm? It is given that the focal length of the mirror is 16 cm. State the nature and the size of the image which is formed.

Hence the object is located 8 cm in front of the mirror. And the image formed is real and inverted. As it is located at the centre of curvature hence the size of the image is also same as that of object.

Example 3: What is the image distance in the case of the convex mirror if the object distance is 12 cm? It is given that the focal length of the mirror is 12 cm.

Example 4: What is the image distance in the case of a concave mirror if the object distance is 10 cm? It is given that the focal length of the mirror is 10 cm.

Where u= object distance= -10cm

Hence the image will be formed at infinity.

Example 5: What is the image distance in the case of a convex mirror if the object is at the focus of the mirror? It is given that the focal length of the mirror is 10 cm. What can u say about the nature of the image formed and also the size?

Where u= object distance= -10cm

Hence the image is located 5 cm behind the mirror. The image formed is virtual and erect and size is diminished.

FAQs on Concave and Convex Mirrors

Question 1: Which mirror is used by the dentist?

Question 2: What is another name for the concave mirror?

Due to the converging nature of the concave mirror, it can also be called a converging mirror.

Question 3: What are the applications of convex mirrors? State any two.

Following are the two application of convex mirror:

Question 4: What is the difference between a concave mirror and a convex mirror?

Previous
Dot and Cross Products on Vectors
Next
GeeksforGeeks School
Related Articles
1. Types of Spherical Mirrors
2. Spherical Mirrors
3. Sign Convention for Spherical Mirrors
4. Derive and Expression for the Capacitance of a Parallel Plate Capacitor with and without Dielectric Medium between the Plates
5. Metals and Non-Metals - Definition, Properties, Uses and Applications
6. Types and Distribution of Forest and Wildlife Resources
7. Amplitude, Time Period and Frequency of a Vibration
8. Magnetic Field Due to Solenoid and Toroid
9. Audible and Inaudible Sounds
10. Class 8 RD Sharma - Chapter 10 Direct And Inverse Variations - Exercise 10.2 | Set 2
Article Contributed By :