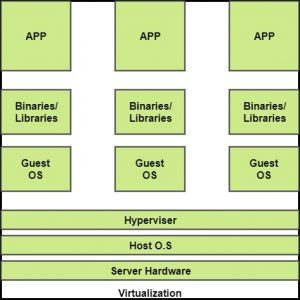 BENEFITS OF VIRTUALIZATION
1. More flexible and efficient allocation of resources.
2. Enhance development productivity.
3. It lowers the cost of IT infrastructure.
4. Remote access and rapid scalability.
5. High availability and disaster recovery.
6. Pay peruse of the IT infrastructure on demand.
7. Enables running multiple operating systems.

2. Network Virtualization:
The ability to run multiple virtual networks with each has a separate control and data plan. It co-exists together on top of one physical network. It can be managed by individual parties that potentially confidential to each other.
Network virtualization provides a facility to create and provision virtual networks—logical switches, routers, firewalls, load balancer, Virtual Private Network (VPN), and workload security within days or even in weeks.

4. Storage Virtualization:
Storage virtualization is an array of servers that are managed by a virtual storage system. The servers aren’t aware of exactly where their data is stored, and instead function more like worker bees in a hive. It makes managing storage from multiple sources to be managed and utilized as a single repository. storage virtualization software maintains smooth operations, consistent performance and a continuous suite of advanced functions despite changes, break down and differences in the underlying equipment.

5. Server Virtualization:
This is a kind of virtualization in which masking of server resources takes place. Here, the central-server(physical server) is divided into multiple different virtual servers by changing the identity number, processors. So, each system can operate its own operating systems in isolate manner. Where each sub-server knows the identity of the central server. It causes an increase in the performance and reduces the operating cost by the deployment of main server resources into a sub-server resource. It’s beneficial in virtual migration, reduce energy consumption, reduce infrastructural cost, etc.

6. Data virtualization:
This is the kind of virtualization in which the data is collected from various sources and managed that at a single place without knowing more about the technical information like how data is collected, stored & formatted then arranged that data logically so that its virtual view can be accessed by its interested people and stakeholders, and users through the various cloud services remotely. Many big giant companies are providing their services like Oracle, IBM, At scale, Cdata, etc.