Work done by the force is dependent only on the initial and final positions of the body, that is the displacement, and not on the actual path followed between initial and final positions. Therefore, when an object gets displaced through a small distance, say s, under the influence of a constant force F, the work done by the force is equivalent to,

where θ is the smaller angle between F and s.

The S.I unit of work done is Joule (J). It is a scalar quantity, which has magnitude only and no direction. Its dimensional formula is [ML2T-2].

Work done by a force on any object is equivalent to zero, if

Energy is the fundamental form of living for all living beings. The Sun in this universe is considered as the elemental form of energy on the planet of Earth. Energy refers to the ability of any object to do work. Energy is required to perform work. It is a qualitative property of a body. The law of conservation of energy states that energy can’t be created nor destroyed. It can just be transferred from one medium to another.

The S.I unit of energy is Joule (J). It is a scalar quantity, which has magnitude only and no direction. Its dimensional formula is [ML2T-2].

Power is referred to the time rate of work done by an object. Mathematically,

Therefore, when an object gets displaced through a small distance, say s, under the influence of a constant force F, the work done by the power is equivalent to,

where θ is the smaller angle between F and v.

The S.I unit of energy is Watt (W). It is a scalar quantity, which has magnitude only and no direction since it is only a ratio of two scalar quantities. Its dimensional formula is [ML2T-3].

According to the fundamental laws of physics, certain attributes are applicable for any types of collision :

During the collision, the interacting bodies come in immediate contact with each other due to which they exert forces. This activity takes place for a very short period of time. There are two types of collisions, namely :

Let us assume two bodies of masses m1 and m2 moving with initial velocities u1 and u2 in the same direction and they collide such that after collision their final velocities are v1 and v2 respectively.

According to law of conservation of momentum

According to law of conservation of kinetic energy, we have,

Deriving from equation (5) we get 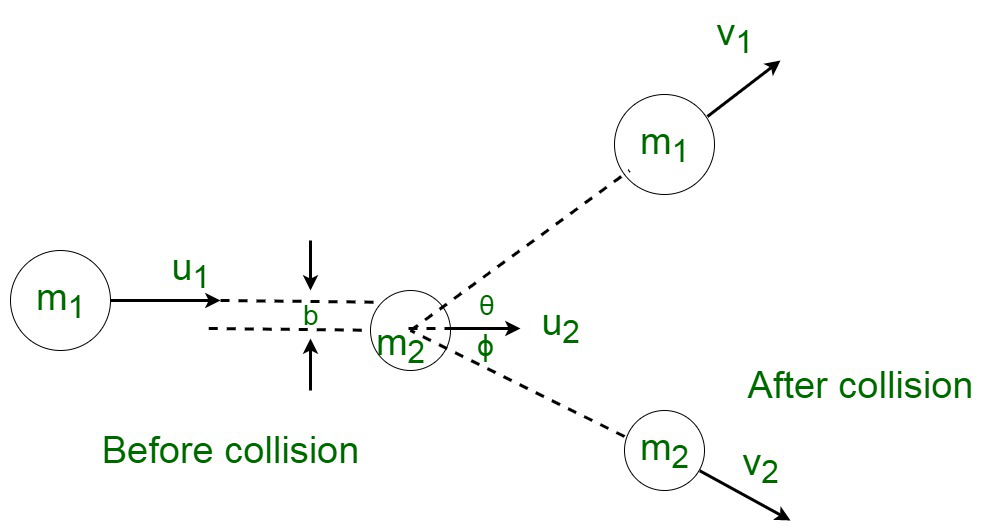 Let us assume two bodies to be in motion,

By the law of conservation of kinetic energy  :

Problem 1: Let us assume that, s small balls, each of mass m hit a surface elastically each second with a velocity u m/s. Calculate the force witnessed by the surface.

Since, there is a rebound of the ball with unmodified velocity, therefore,

The change in velocity = 2u

Mass colliding with the surface =  sm

Force experienced by the surface is given by,

By the law of conservation of linear momentum, we have,

Therefore, the final velocity of the car is 18 km/h.

Problem 3: A crate is kept at the origin of mass equivalent to 5 kg. A force of 10 N is applied to it to simulate its movement at an angle of 60° with the x-axis. As a result of this displacement, the crate moves by 4 m. What is the work done by the application of the force?

Work done is given by the dot product of force and displacement, that is,

Problem 4: A crate is kept on a table of mass equivalent to 1 kg. It is dragged along the horizontal table through the length of 1 m by an external force of 8 N. It is then subjected to a vertical height of 2 m. Compute the net work done.

Net work done on the crate is WH + Wv

Problem 5: A horizontal force of 5 N is required to maintain a velocity of 2 m/s for a block of 10 kg mass sliding over a rough surface. The work done by this force in one minute is?