Screenshots allow users to capture what’s present on their screen. They are important if you want to share particular information with others or refer later. Talking, saving, and sharing screenshots is becoming most useful for everyone.

But did you know in Windows you can capture screenshots in a very easy and effective way? Windows 10 has a Snip & Sketch Tool you should also try.

So, to overcome this problem, another better option is to use the Snip & Sketch tool that allows users to take a screenshot of a selection of a screen in four different forms according to the user’s convenience. It comes preinstalled with Windows 10 but If this tool is not installed on your machine, it is available in a Microsoft store for free.

4 Different Types of snip in the Snip & Sketch Tool:

Now let’s talk about what steps we need to be performed to use the Snip & Sketch Tool.

Different ways are there to open a Snip & Sketch app,

Press the “Windows logo key + SHIFT + S” to open a snipping toolbar of Snip & Sketch.  Type Snip & Sketch in the search box present in the lower-left corner, and then choose Snip & Sketch Tool.  Open the Action Center, and press the button labeled Screen snip. It should be there, but if not, you can turn on it through Notifications and Action Center settings.  Press the Print Screen button, Go to the settings, and search for “PrtScn”, which will take you to the page with an on-off button that says, “Use the Print Screen to launch Screen snipping”. Turn on this toggle to open Snip & Sketch app with a single keypress.

As you will open a Snip & Sketch tool, this snipping toolbar will open up which consists of four modes. 1. Rectangular snip 2. Free-form snip 3. Window snip 4. Full-screen snip 5. Exit (Numbers are according to position)

To take a snip, select a mode among four, and cover the region on your screen. As you take a snip, It gets copied to your clipboard. If you want to edit it click on Snip & Sketch notification arrived from the notification panel, and there you have options to edit, save and share the snip. 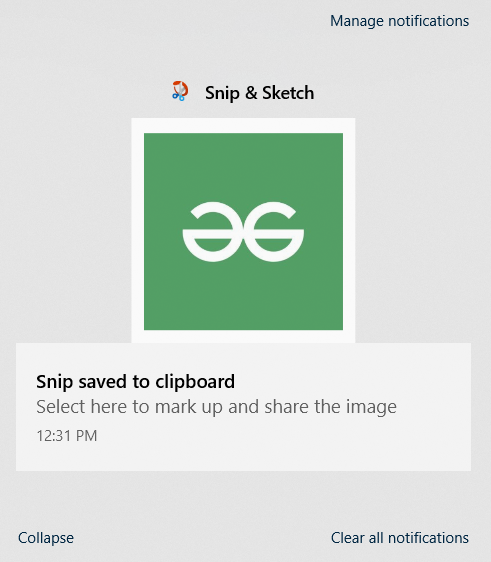 This notification will pop up when you take a snip, click on this to open snip in the app.

As mentioned in the second step, after taking a snip, you’ll get a notification to take up your screenshot to the Snip & Sketch app. In the app, you can edit, save and share this snip. If you don’t want to edit, leave it as it is, the snip is also copied to the clipboard, so you can directly paste it wherever you want. In the top right corner, there are options to zoom, save as, copy and share the snip. 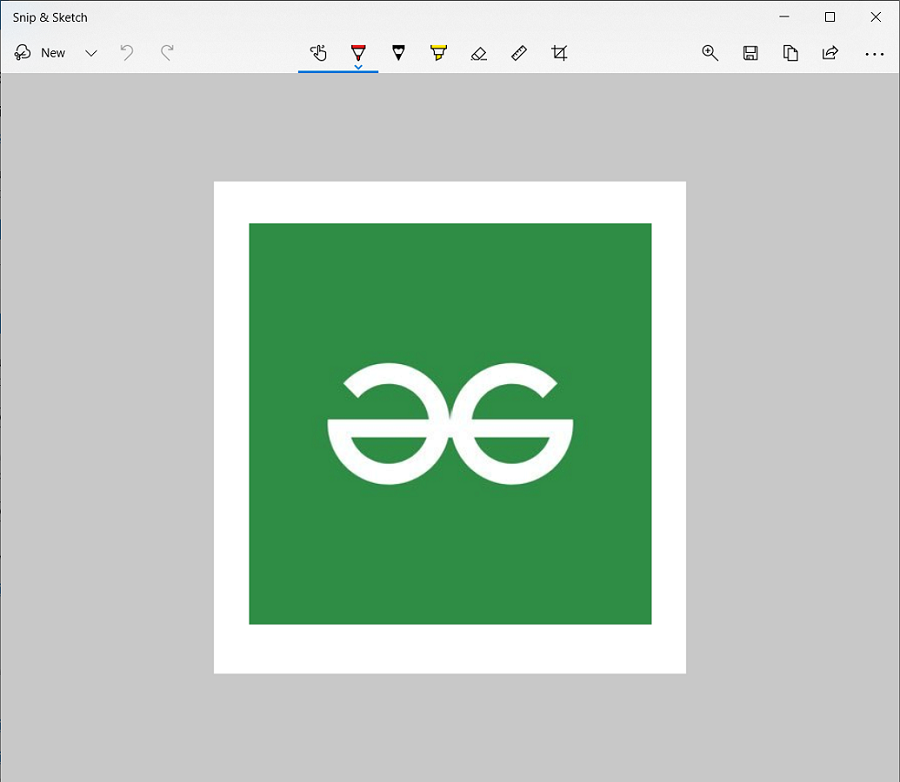 Here you can edit the snip, save and share.

That’s all, in this way you can capture, save, and share screenshots with the help of the “Snip & Sketch” Windows 10 Tool.

My Personal Notes arrow_drop_up
Previous
Creating Slide to Shut Down Shortcut in Windows 10
Next
How to Find Your Data Science Mentor in 2021?
Recommended Articles
Page :
Useful CMD commands for daily use in Windows OS
07, Nov 16
Windows 10 Toast Notifications with Python
08, Jan 19
Uninstall Linux completely from a PC with Windows
27, Sep 17
Installing MongoDB on Windows with Python
01, Nov 17
Zip files in Windows
26, Mar 18
IDE for Python programming on Windows
11, Dec 17
How to mount windows drives in Ubuntu
23, Dec 18
Setup GitLab Repository On Windows 10
12, Apr 18
How To Use Bash Shell Natively On Windows 10
07, May 18
How to Delete Temporary Files in Windows 10?
04, Jun 21
Backup & Restore Files using Windows File History
08, Mar 21
Windows Server 2012 R2 Stuck at "Updating Your System”
11, Dec 18
Creating a Dual Boot System with Linux and Windows
31, Dec 18
How to Install Linux on Windows PowerShell Subsystem?
31, Jan 20
Autorun a Python script on windows startup
26, Feb 19
How to create a Folder without any name and icon in Windows OS?
11, Jul 19
How to use Emojis in Windows 10?
01, Oct 19
How to set PHP development environment in windows ?
16, Oct 19
Tricks in Windows 10 | Set -1
11, Nov 19
How to Create and Configure Wi-Fi Hotspot in Windows 10?
21, Nov 19
Parzen Windows density estimation technique
30, Jan 20
How to Install Oracle Database 11g on Windows?
11, Feb 20
Windows Shortcut Keys
18, Feb 20
How to Change Colours in Command Prompt in Windows?
13, Mar 20
Article Contributed By :