Program to Calculate the Perimeter of a Decagon

of a Decagon, the task is to find out the Perimeter of the Decagon.
Explanation : In geometry, a decagon is a ten-sided polygon or 10-gon. A regular decagon has all sides of equal length and each internal angle will always be equal to 144 degrees. 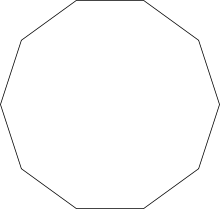 The formula for finding the Perimeter of the Decagon is:

Below is the program to find perimeter of decagon: