MATLAB stands for Matrix Laboratory. It is a high-performance language that is used for technical computing. It was developed by Cleve Molar of the company MathWorks.Inc in the year 1984.It is written in C, C++, Java. It allows matrix manipulations, plotting of functions, implementation of algorithms and creation of user interfaces.

Getting started with MATLAB:
It is both a programming language as well as a programming environment. It allows the computation of statements in the command window itself.

MATLAB Library comes with a set of many inbuilt functions. These functions mostly perform mathematical operations like sine, cosine and tangent. They perform more complex functions too like finding the inverse and determinant of a matrix, cross product and dot product

Although MATLAB is encoded in C, C++ and Java, it is a lot easier to implement than these three languages. For example, unlike the other three, no header files need to be initialised in the beginning of the document and for declaring a variable, the data type need not be provided. It provides an easier alternative for vector operations. They can be performed using one command instead of multiple statements in a for or while loop.

Some of the basic functions in MATLAB and their uses are listed below:

Plotting in MATLAB:
The MATLAB graphics system consists of high-level commands for two-dimensional and three-dimensional data visualization, image processing, animation, and presentation graphics. It also includes low-level commands that allows to fully customize the appearance of graphics as well as to build complete Graphical User Interfaces.

Given below is a code for plotting a Parabola:

This code will give the following graph: 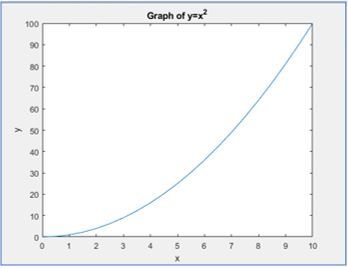 You can change the color of the graph by adding another statement in the plot command. For example, plot(x, y, ‘r’) will give the graph line in red.

Graphs such as sine, cosine and other trigonometric functions’ curve can also be plotted. The code for sine curve is given below:

In conclusion, MATLAB is a very user friendly language and it is also easy to understand.It’s library is equipped with functions that help us perform a variety of mathematical functions.