Facade is a part of the Gang of Four design patterns and it is categorized under Structural design patterns. Before we dig into the details of it, let us discuss some examples which will be solved by this particular Pattern. So, As the name suggests, it means the face of the building. The people walking past the road can only see the glass face of the building. They do not know anything about it, the wiring, the pipes, and other complexities. It hides all the complexities of the building and displays a friendly face.

In Java, the interface JDBC can be called a facade because we as users or clients create connections using the “java.sql.Connection” interface, the implementation of which we are not concerned about. The implementation is left to the vendor of the driver. Another good example can be the startup of a computer. When a computer starts up, it involves the work of CPU, memory, hard drive, etc. To make it easy to use for users, we can add a facade that wraps the complexity of the task, and provide one simple interface instead. The same goes for the Facade Design Pattern. It hides the complexities of the system and provides an interface to the client from where the client can access the system. 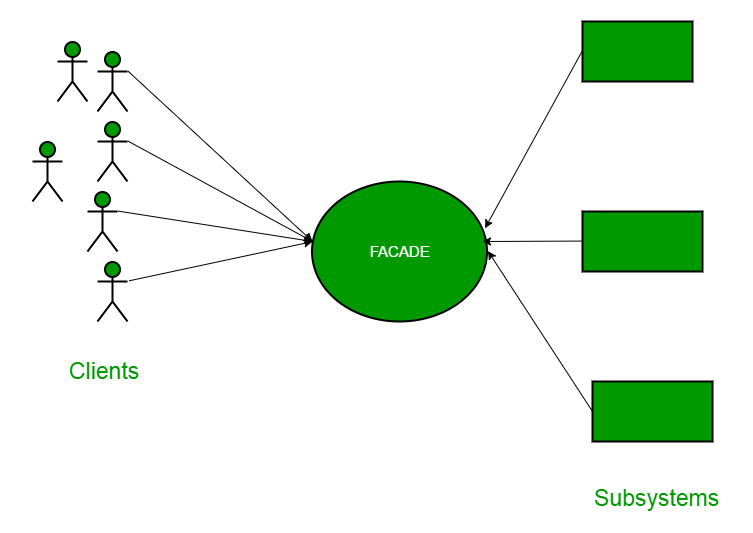 In this way, the implementation is sent to the façade. The client is given just one interface and can access only that. This hides all the complexities.

The facade pattern is appropriate when you have a complex system that you want to expose to clients in a simplified way, or you want to make an external communication layer over an existing system that is incompatible with the system. Facade deals with interfaces, not implementation. Its purpose is to hide internal complexity behind a single interface that appears simple on the outside.

This article is contributed by Saket Kumar. If you like GeeksforGeeks and would like to contribute, you can also write an article using write.geeksforgeeks.org or mail your article to review-team@geeksforgeeks.org. See your article appearing on the GeeksforGeeks main page and help other Geeks. Please write comments if you find anything incorrect, or you want to share more information about the topic discussed above.