Basically, a picture may be a visual representation of an object which is placed somewhere ahead of a mirror or lens. Formation of image may be a results of meeting of sunshine rays after being reflected or refracted consistent with their respective laws.

It is to be noted here that rays not always meet, sometimes they only appear to satisfy. This also produces images. So, on idea, that either rays actually meet or simply appear to satisfy, images are classified as real and virtual.

1. Real Image ;
Real images are the sort of images that are formed thanks to convergence of sunshine rays at some extent after being reflected or refracted from a mirror or lens. Real images are formed at purpose where light rays undergo interaction with one another. Real images are inverted in nature and may be seen on screen.

Suppose an object is placed ahead of concave mirror and lightweight after getting reflected from that object strikes surface of concave mirror. When multiple light rays strike mirror, then by following laws of reflection, sunshine different rays again get reflected and meet at some extent ahead of mirror.

2. Virtual Image :
Virtual images are pictures that only appear to be formed at an edge behind a mirror. However, really, image isn’t present there. Unlike important images, a reflection is made when reflected or refracted light rays get diverged. During this case, when light from an object is allowed to strike mirror and when light rays get reflected from mirror then it’s like that rays are diverging somewhere behind mirror.

Basically, no light reaches behind mirror, thus it’s always said that rays appear to satisfy somewhere, because it is just perception of viewer. this is often rationale why virtual images aren’t displayed on screen. Pictures produced within case of plane mirrors are specifically of virtual type. Another noteworthy point up here is that virtual images aren’t imaginary. Thus possess definite shape and size and hence are often seen by attention or any instrument. 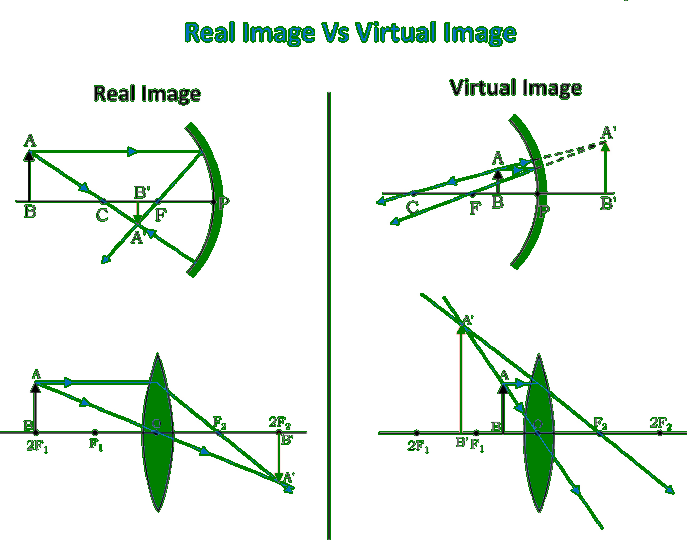