Difference between Process and Thread

Process: Processes are basically the programs that are dispatched from the ready state and are scheduled in the CPU for execution. PCB(Process Control Block) holds the concept of process. A process can create other processes which are known as Child Processes. The process takes more time to terminate and it is isolated means it does not share the memory with any other process.

The process can have the following states new, ready, running, waiting, terminated, and suspended.

The thread takes less time to terminate as compared to the process but unlike the process, threads do not isolate. 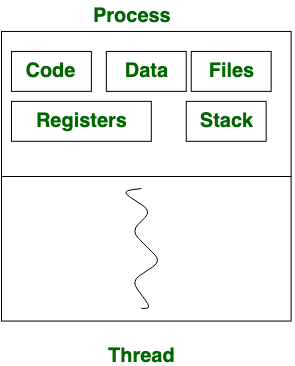 Difference between Process and Thread:

Note: In some cases where the thread is processing a bigger workload compared to a process’s workload then the thread may take more time to terminate. But this is an extremely rare situation and has fewer chances to occur.