The light gets reflected from the surfaces. Any surface which is polished or in other words is shiny always acts like a mirror be it of any kind. The observation of light bouncing off or getting back from the surfaces is termed reflection. The light after the case of reflection travels or follows in the same medium from where the ray was incident on the surface. This phenomenon of reflection does not intend to change the velocity of light it only reverses the direction of light incident on it. This can be observed on any surface which is rough or smooth. The path of the reflected ray will depend upon the extent of smoothness of the surface, in the case of smooth surface the reflected ray emerges with the same angle as of incidence and in the latter case suffers irregular reflection and so the reflected ray doesn’t emerge the same as that of incidence angle.

There are some common terms that we need to know while studying spherical mirrors, and they are as follows:

They always make upright, enlarged images, and are therefore useful in makeup application or shaving. They are widely used in everyday life as in flashlights and the headlights as they project parallel beams of light, and in the telescopes, as they focus light to produce greatly enlarged images.

A concave mirror is widely used as the reflector in searchlights everywhere, as headlights of motor vehicles, as solar cookers, in torches, and in the table lamps. A convex mirror is greatly used in the automobiles such as in scooters, trucks, and in buses as a rearview mirror to see the traffic behind the vehicle.

A typical spherical mirror is a part of a big sphere of which the cut out has been taken. The following diagram describes different parts which are there in a spherical mirror. The definition of these parts is already given above. 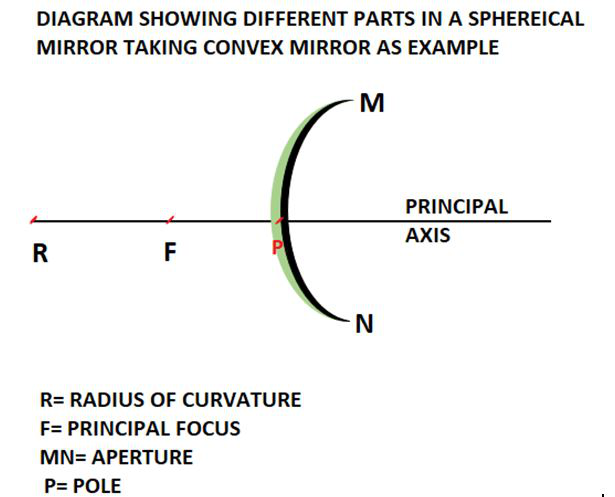 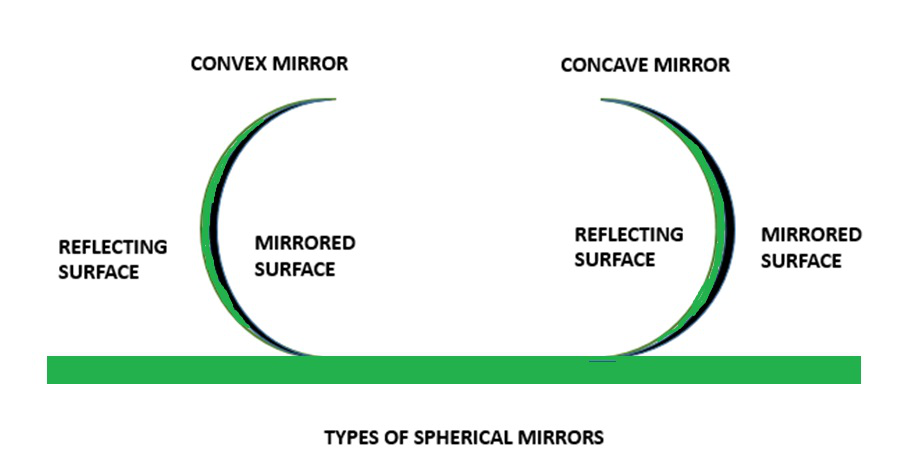 A spherical mirror of which the reflecting surface is curved inwards which means that it faces towards the centre of the sphere is known to be a concave mirror. The back of the mirrors is always shaded so that reflection can take place only from the inward bulged surface. The surface of the spoon which is curved inwards can be approximated to a concave mirror. It is also known as the converging mirror as the ray of light after bouncing back from it appears to converge at some points where we can obtain a real, inverted, and enlarged or diminished image based on the location of the object.

A spherical mirror having its reflecting surface curved outwards is known to be a convex mirror. The back of the mirror is shaded so that reflection only takes place from the outward bulged part. The surface of the spoon which is bulged outwards can be assumed to be a convex mirror. It is also known as a diverging mirror as the light after reflecting through its surface diverges to many directions but appears to meet at some points where the virtual, erect image of diminished size is formed.

Usually, if the object is located on the left side of the principal axis from the mirror then the object distance is taken negative. While if it is located on the right side it is taken to be positive. The sign of focal length depends on the type of mirror we are using, as for the concave mirror it is negative and for the convex mirror on the other hand is positive always. It is to be mentioned again that we have to follow the sign conventions strictly to get the correct answer. Heights which are above the principal axis are positive and below are negative.

The following examples show how rays are traced for various positions of an object from the spherical mirrors:

As the parallel rays coming from the object converge at the principal focus, F of a concave mirror; after reflection through it. Therefore, when the object is at infinity the image will form at F. 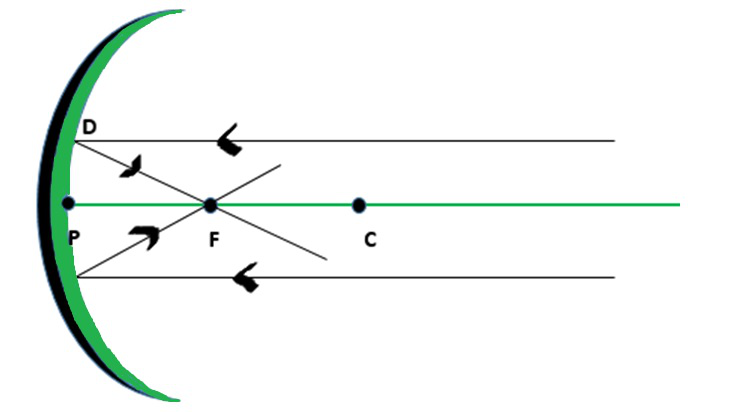 Properties of the image formed:

Whenever the object is kept at infinity, we observe that a point-sized image is formed at principal focus behind the convex mirror. 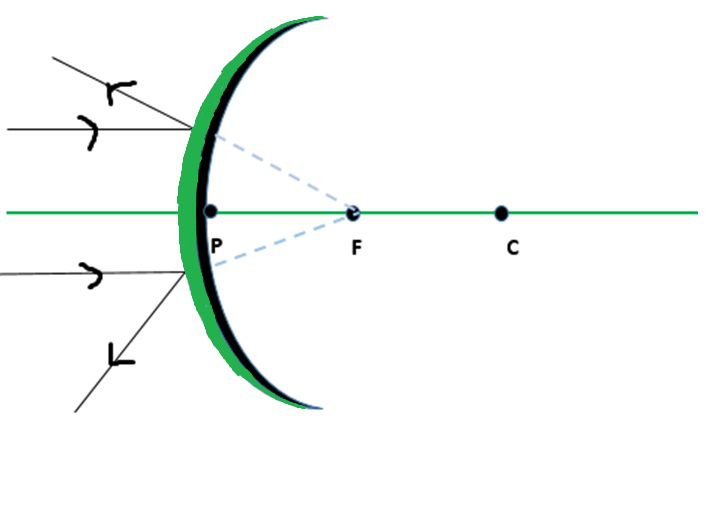 Question 1: Find out the focal length with sign in case of concave mirror with a radius of curvature 30cm.

f= -15cm (negative indicates that it is a concave mirror.)

Hence, the focal length of the concave mirror is 15cm.

Question 2: Give the types of spherical mirrors.

There are two types of spherical mirrors:

Question 3: How can you define the principal focus of a concave mirror?

When a parallel beams of light rays are incident on a concave mirror they after reflection through its surface converge at a particular point on the principal axis which is known as principal focus of concave mirror.

Question 4: How can you define the principal focus of a convex mirror?

Question 5: What is the focal length of the convex mirror if the radius of curvature is 40cm?

f= +20cm (positive indicates that it is a convex mirror.)

Hence, the focal length of the convex mirror is 20cm.

Question 6: What is the radius of curvature of convex mirror if its focal length is 16cm?

Hence, the Radius of curvature of the convex mirror is 32cm.