Difference between Crystalline and Amorphous Solids

A solid-state is simply one of the states of matter. Solids have definite mass, volume, and shape. Solids generally exhibit certain characteristics that set them aside from liquids and gases. They have the ability to resist any force that’s applied to their surface. The solid state of compounds depends on the arrangement of constituent particles and the force acting between them.

The following are the distinguishing characteristics of the solid-state:

Solids are classified into two types based on the arrangement of constituent particles: 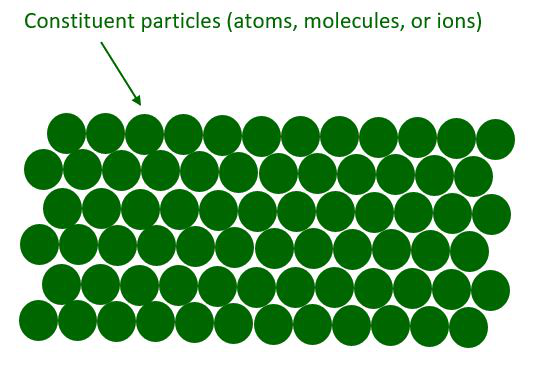 Crystalline solids are classified into four types based on the nature of their intermolecular forces: molecular, ionic, metallic, and covalent solids. Let us now learn more about these classifications.

These are made up of either atom, such as argon and helium, or molecules formed by non-polar covalent bonds, such as H2, Cl2, and I2. The atoms or molecules in these solids are held together by weak dispersion forces or London forces. These solids are soft and electrically inactive. They have low melting points and are typically liquids or gases at room temperature and pressure.

Polar covalent bonds form the molecules of substances such as HCl, SO2, and others. The molecules of these solids are held together by relatively stronger dipole-dipole interactions. These soft solids are electrically inactive.

Their melting points are higher than those of non-polar molecular solids, but at room temperature and pressure, the majority of these are gases or liquids. Examples of such solids include solid SO2 and solid NH3.

These solids’ molecules have polar covalent bonds between H and F, O, or N atoms. Strong hydrogen bonding holds molecules of solids like H2O together (Ice). They are not electrical conductors. Under normal conditions of temperature and pressure, they are either volatile liquids or soft solids.

Ions are the particles that make up ionic solids. Ionic solids are three-dimensional arrangements of cations and anions held together by strong electrostatic forces. These solids are naturally hard and brittle. Their melting and boiling points are both very high. Because the ions cannot move freely, they are electrical insulators in the solid-state. When the ionic solid is molten or dissolved in water, the ions become free to move and conduct electricity.

Metals are a well-organized collection of positive ions that are surrounded and held together by a sea of free electrons. These electrons are mobile and are distributed evenly throughout the crystal. Each metal atom adds one or more electrons to the sea of mobile electrons. Metals’ high electrical and thermal conductivity is due to these free and mobile electrons. These electrons flow through the network of positive ions when an electric field is applied. On the same things when heat is applied to one part of metal, free electrons evenly distribute the thermal energy throughout. In some cases, the luster and color of metals are also important characteristics. This is due to the presence of free electrons in them as well.

The formation of covalent bonds between adjacent atoms throughout the crystal results in a wide range of nonmetal crystalline solids. They are also known as giant molecules. Because covalent bonds are strong and directional in nature, atoms are held very tightly in their positions. These solids are extremely hard and brittle. They have extremely high melting points and may decompose prior to melting.

They are electrical insulators that do not conduct electricity. Diamond and silicon carbide are two well-known examples of such solids.

Amorphous solids (Greek amorphos = no form) is made up of irregularly shaped particles. Short-range order exists in the arrangement of constituent particles (atoms, molecules, or ions) in such a solid. Only over short distances is a regular and periodically repeating pattern observed in such an arrangement. Amorphous solids include gels, plastics, various polymers, wax, and thin films. 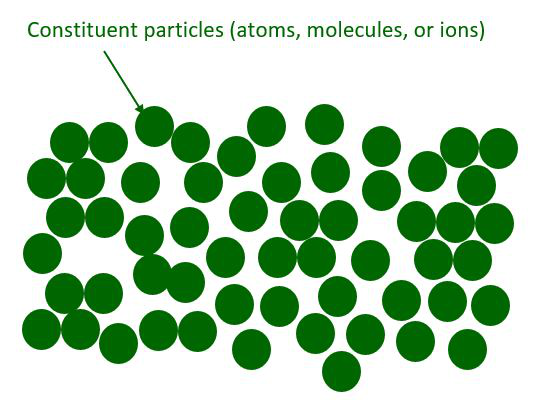 Question 1: What causes solids to be rigid?

In solids all the constituent particles are strongly connected also the bonds between the atoms are very strong that’s why solids are rigid.

Question 2: Why do solids have a specific volume?

Because of the rigidity of their structure, solids retain their volume. Interparticle forces are extremely strong. Furthermore, interparticle spaces are scarce and small. As a result, applying pressure to them will not change their volumes.

Question 3: Ionic solids conduct electricity when molten but not when solid. Explain.

Question 4: What are electrical conductors, malleable and ductile solids?

Question 5: Why is glass classified as a supercooled liquid?

Glass is considered a supercooled liquid because it exhibits some of the properties of liquids despite being an amorphous solid. It is, for example, slightly thicker at the bottom. This is only possible if it has flown like liquid, albeit very slowly.