Diffusion in Solids, Liquids, and Gases

Because of diffusion, when sugar is introduced to water, it is combined. Because of their constant movement, sugar particles collide with water particles. Carbonated drinks are made by allowing gas to diffuse through water. When the cap of a carbonated drink bottle is opened, we hear a hissing sound, which is caused by dispersed gas escaping from the water. Aquatic animals breathe dissolved oxygen in the water. Because of the dissolved carbon dioxide in water, aquatic plants generate their food underwater. Diffusion caused these gases to dissolve in water. 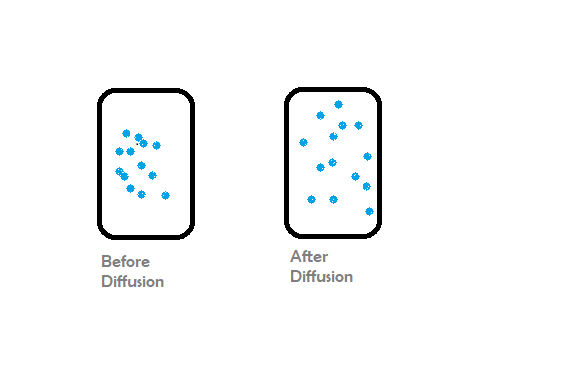 Diffusion is the spreading out or mixing of a substance with another substance caused by the motion of its particles. The process of one substance diffusing into another continues until a homogeneous mixture is achieved.

Diffusion is a feature of matter that is determined by the movement of its particles. Diffusion is a phenomenon that occurs in gases, liquids, and solids.

As the temperature of the dispersing substance rises, so does the rate of diffusion. In gases, diffusion is the fastest, whereas in solids, it is the slowest. Various gases have different diffusion rates. Denser gases intermingle at a slower rate than lighter gases. Dissemination occurs in both liquids and solids. The pace of diffusion in solids, on the other hand, is quite slow. Diffusion in liquids is slower than diffusion in gases because liquid particles travel slowly.

For example, people can smell cold food from a short distance, whereas we can smell hot food from a long distance. Because the kinetic energy of the smell coming out of the cold food in the form of gas is insufficient to traverse a greater distance. When food is hot, however, the vapour that escapes moves faster due to the increased kinetic energy and reaches us even if we are far away.

Liquid diffusion is slower than gas diffusion. This is due to the fact that liquid particles travel more slowly than gas particles. Because of kinetic energy, the liquid particles have enough mobility to allow diffusion. Diffusion causes two liquids to combine when they are kept together.

Diffusion can happen in solids as well. Solid-state diffusion is an extremely slow process. Solid particles have the lowest kinetic energy and so do not move. As a result, in the case of solids, diffusion takes a lengthy time.

Question 1: What is the importance of gas diffusion in water? Explain with example.

Question 2: What does the “random walk” of particles refers to in diffusion?

Brownian motion, often known as “random walk,” describes how molecules travel through space, bouncing off other particles and obstacles and reacting with their surroundings.

Question 3: When does the concentration gradient no longer exist?

It is considered to have reached equilibrium when the molecules that have been introduced to a substance have distributed throughout the substance. The concentration of molecules in the substance is now uniform throughout, and the gradient has vanished.

Question 4: Why are the diffusion rate differs between gases, liquids, and solids?

Question 5: Why do molecules appear to move down a concentration gradient as they diffuse through a substance?

Diffusion is the movement of molecules through a medium due to their random motion and collisions with other particles. Molecules will shift from a high-concentration location to a low-concentration area over time, becoming uniformly disseminated throughout.

Question 6: Explain why Osmosis is different from diffusion.

Osmosis is a kind of diffusion in which two liquid solutions are separated by an SPM. The SPM is unable to pass through solutes. Because the dilute solution contains more solvent particles than the concentrated solution, these particles migrate through SPM from the former to the latter.

Question 7: Why Interstitial diffusion is generally faster than diffusion by vacancy mode?