Change of State of Matter

When cubes of ice melt into water or liquid boils into vapour, you may have seen changes in states of matter, but have you ever wondered why the substances change their form? When matter loses or gains energy, it changes its condition. When a substance gains energy, its molecules or atoms move faster, and extra kinetic energy pushes the particles at a sufficient distance apart from one another that their shape changes. Typically, this energy is called thermal energy or heat. Let us look at the science supporting the shifting states of matter in this post.

A physical change in a matter is referred to as a change of condition. They are reversible alterations that do not entail any modifications to the matter’s chemical composition. Deposition, melting, sublimation, freezing, vaporisation and condensation are examples of state transitions. The modifications are depicted in the diagram below. 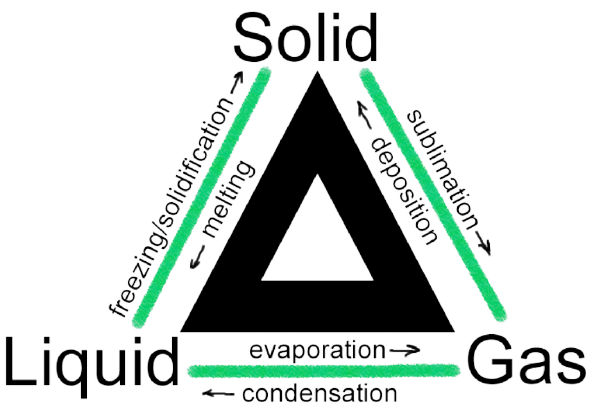 1. Change of phase between solids and liquids

In a tray, how would you form ice cubes? To begin, the tray is filled with water from a faucet. The tray would then be placed in the refrigerator’s freezer compartment. The freezer is really frigid. So, what’s next?

2. Change of phase between gases and liquids

The water warms up when you fill a pot with cold tap water and heat it on a hot cooktop. Heat energy flows from the cooktop to the pot, where it is absorbed by the water. What will happen to the water after that?

3. Change of phase between gases and solids

Solids that transform to gas must first pass through a liquid condition. Solids may, on the other hand, transform from solid to gas without passing through the liquid state. The opposite change can also happen. Gases can sometimes convert straight to solids.

Problem 1: What does it take to alter the state of matter?

It specifies a matter’s changing condition when you add or remove heat from it. When you apply heat to a substance, it begins to melt. When the heat is removed, though, it begins to solidify. The movement of particles causes a change in the state when heat is added or removed from the substance. The atoms in a substance are always moving at various speeds. They gain speed as a result of the heat.

Problem 2: Explain the sentence “The liquid state is a transitional condition between the gaseous and solid states.”

Problem 3: What are the two types of changes that can happen in a situation?

Physical and chemical alterations are the most common changes that matter endures. There is no change in the identity of a matter after physical transformation. On the other hand, its shape, size, and status vary. However, if a chemical change occurs, it cannot be reversed or is only reversible under particular conditions.

Problem 4: What is the mechanism through which gases become solids directly?

Deposition is the process through which a gaseous state transforms into a solid state without transitioning to a liquid state.

Problem 5: How many different states of matter are there?

Matter is anything in our surroundings that has its own mass and occupies a certain amount of space. It can also be defined as objects that we can taste, touch, or smell. For instance, a chair, air, water, gold, and so on. An atom is the smallest particle of matter.

There are five forms of matter known to us out of which three are found under normal conditions. These are:

Solid, liquid and gas are common forms out of these matters.

My Personal Notes arrow_drop_up
Previous
Count frequency of itemsets in Pandas DataFrame
Next
Python - Import from parent directory
Recommended Articles
Page :
Liquid State of Matter
27, Nov 21
Flutter - local state vs App-wide state
15, Feb 21
Thermodynamic State Variables and Equation of State
18, Oct 21
Classification of Matter
26, Jun 21
Changing States of Matter
01, Aug 21
Matter is Made of Tiny Particles
19, Jul 21
Difference between Rigidity and Fluidity of Matter
01, Sep 21
Charged Particles in Matter
11, Oct 21
Why Does the OSI Reference Model Matter?
22, Nov 21
What is Matter? - Definition, States, Classification and Properties
28, Nov 21
Properties of Matter and their Measurement
30, Nov 21
Wave Nature of Matter and De Broglie’s Equation
26, Sep 21
Molecular Nature of Matter - Definition, States, Types, Examples
20, Dec 21
Kinetic Theory of Matter
15, Jan 22
How to Change Tkinter Button State?
17, Dec 20
How to change radio button state programmatically in jQuery ?
23, Jul 21
Change in State of Motion
24, Apr 21
How to get button toggle state within HTML?
05, Aug 20
How to update nested state properties in ReactJS?
28, Dec 20
How to update parent state in ReactJS ?
21, Dec 20
How to set an object key inside a state object in React Hooks?
13, Jan 21
How to set Parent State from Children Component in ReactJS?
27, Jan 21
How to access child's state in React?
29, Jan 21
Flutter - State Management
15, Feb 21
Article Contributed By :