The Universe is made up of two elements: Matter and Energy. The matter is made up of atoms and molecules, and energy causes these atoms and molecules to move constantly – either by vibrating back and forth or colliding with one another. This movement of molecules and atoms generates a type of energy known as Thermal Energy or Heat. Heat exists in all materials, even the coldest gaps of space. This article discusses Calorimetry, which is a way of measuring heat transfer that occurs within a chemical reaction or other physical processes. Before jumping to the main topic firstly let’s understand what is Heat and Temperature.

2. Thermal Expansion: When heat is passed through a material, its shape changes from its original. In other words, an object expands on heating. So there is an increase in the size of the body due to an increase in temperature. This property of the material is termed Thermal Expansion. Thermal expansion is measurably high in the case of gases, while in the case of liquids and solids it is relatively small.

The materials which do not conduct heat at all, are known as insulators. These objects show insulating properties. For example, normal window glass will conduct less heat than an iron rod.

The SI unit of thermal conductivity is W/m.K (Watts per meter-Kelvin). Thermal Conductivity can be calculated using the formula given below:

where k is the thermal conductivity, Q is the heat flow, L is the thickness or length of the object, A is the surface area of the object and (T2 – T1) is the temperature gradient. 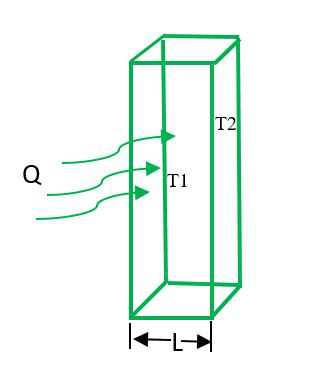 4. Thermal Stress: Due to thermal expansion or contraction the body experiences some kind of stress. This is called thermal stress. The disadvantage of thermal stress is that it has the potential to destroy the object as it can make the material explode, so it may turn out to be destructive in nature. Apart from this disadvantage, thermal stress can also have advantages, for example, while joining two parts by heating the one part in manufacturing and then sliding it over the other which allows this combination to cool.

The formula to calculate thermal stress is as below:

Calorimetry is the branch of physics that monitors changes in a body’s heat energy. We are all aware that heat is a type of energy. The temperature of a body indicates the amount of heat it contains. As a result, the greater the temperature, the larger the heat energy of a body.

As a result, to determine whether a body has received or lost heat energy, we measure the temperature of the body before and after the transfer. The change in heat energy of the body is determined by the variation in temperature.

Calorimetry is the act or science of observing the change in a body’s state variables in order to measure the heat transfer associated with changes in its states such as physical changes or phase transitions under certain conditions. A calorimeter is used to perform calorimetry. Keep in mind that this topic mainly covers the transmission and conversion of ‘Heat’ energy into other kinds of energy such as work and vice versa.

A device that is used for the measurement of heat (thermal changes of a body) necessary for calorimetry, is known as Calorimeter.

A simple calorimeter is a vessel that is generally made up of copper with a stirrer of the same material. The vessel is kept in a wooden box to separate it thermally from the surrounding. A thermometer is used for the measurement of the temperature of the contents of the calorimeter. There is one opening through which a thermometer can be inserted to measure the change in thermal properties inside.

Objects which are at different temperatures are made to come in touch with each other in the calorimeter. In a calorimeter a fixed amount of fuel is burned, leading to the heating of water. Heat which is lost by the fuel is equal to the heat which is gained by the water. As a result, heat is exchanged between the objects and the calorimeter. Neglecting any heat exchange with the surrounding. This is why it is important that the calorimeter should be insulated from the environment; to improve the accuracy of the experiment. This exchange of heat is measured through the thermometer. 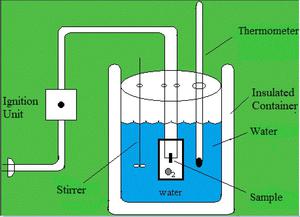 The principle of calorimetry explains the law of conservation of energy, which states that the total heat lost by the hot body equals the total heat gained by the cool body, that is:

The heat is calculated using the Calorimetry formula,

where Q is the heat capacity, m is the mass, C is the specific heat capacity and ΔT is the temperature change.

The amount of heat that is needed to melt a solid of mass m may be written as:

where L is a constant for the given material (and surrounding conditions) or known as the specific latent heat of fusion/vapourisation.

Problem 2: A calorimeter is kept in a wooden box to insulate it thermally from the surroundings. Why is it necessary?

Problem 3: When a solid melt or a liquid boils, the temperature does not increase even when heat is supplied. Where does the energy go?

Now, we know that,

Hence, the equilibrium temperature of the mixture is 25oC.

Let, v be the volume of cube.

Let, t K be the initial temperature of the iron.

Heat gained by the ice = Heat lost by the iron cube

Hence, the initial temperature of the cube is 80oC.

Total amount of heat required to raise the temperature from 10°C to 35°C,

Only 80% of the power input is used to heat the water. Therefore,

Hence, the required time is 44 min.

Problem 7: A brick weighing 4 kg is dropped into a 1 m deep river from a height of 2 m. Assuming that 80% of the gravitational potential energy is finally converted into thermal energy, find this thermal energy in calories.

Hence, the required thermal energy in calorie is 23 Cal.