Mixtures are made up of more than one pure form of matter. A non-chemical combination of two or more substances is referred to as a mixture (elements or compounds).

There are two types of Mixtures, Homogeneous Mixtures and Heterogeneous mixtures. 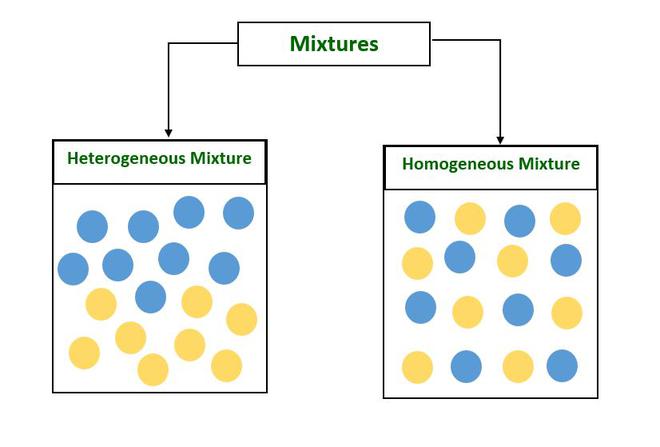 A homogeneous mixture is one in which the composition of its constituents is uniform throughout its mass. It lacks visible boundaries that separate the various components. As an example, consider a sugar solution or a salt solution.

Heterogeneous mixtures do not have a uniform composition throughout their mass and have visible separation boundaries between various components. As an example, consider a sand and water mixture.

What is a Solution?

A solution is a homogeneous mixture of two or more components with particle sizes less than one nanometer. In your daily life, you come across various types of solutions. Sugar in water and salt in water solutions, as well as soda water, are common examples of solutions. All of the components appear as a single phase in a solution. There is particle homogeneity, which means that the particles are evenly distributed. This is why a whole bottle of soft drink tastes the same.

What is a Suspension?

If we put mud in a glass of water, it will form a heterogeneous mixture. The components of these mixtures are easily identified. After some time, we will notice that mud particles settle down due to gravity. Particles in suspension are larger than those in solution. 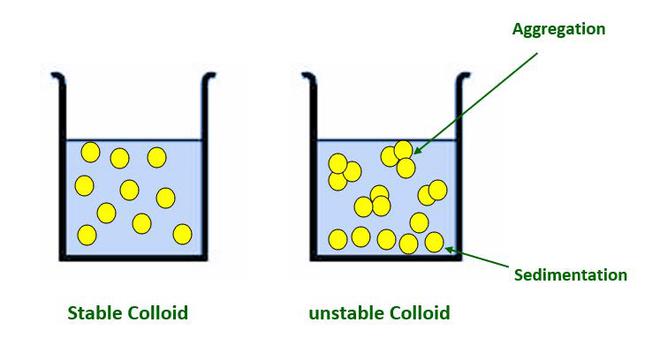 The different types of colloidal solution are:

The scattering of light (light beam) through a colloidal solution is referred to as the Tyndall effect. When particles in a colloid scatter light beams directed at them, this is known as the Tyndall effect. This effect can be seen in all colloidal solutions and some very fine suspensions. As a result, it can be used to determine whether a given solution is a colloid. The intensity of scattered light is affected by the density of colloidal particles as well as the frequency of incident light.

When a light beam passes through a colloid, the colloidal particles in the solution prevent the beam from completely passing through. Light is scattered when it collides with colloidal particles (it deviates from its normal trajectory, which is a straight line). This scattering reveals the path of the light beam, as shown below.

Examples of the Tyndall Effect:

Question 1: What exactly are colloids? Can you give an example?

Colloids are also referred to as colloidal solutions or colloidal systems. A colloid is a substance that exists between a solution and a suspension. It contains particles ranging in size from 2 to 1000 nanometers. A colloid is visible to the naked eye.

Question 2: What exactly do you mean by the Tyndall effect?

Question 3: What are the properties of colloids?

The properties of a colloid are as follows:

Question 4: What exactly are sol. Can you give an example?

A sol is a colloid composed of very small solid particles suspended in a continuous liquid medium. Sols are fairly stable and exhibit the Tyndall effect. Blood is one example.

Question 5: What exactly is a Tyndall cone?

When light passes through a colloidal solution, the path of light appears to be a bright cone due to Tyndall scattering. This is due to the fact that colloidal particles scatter light in all directions. Tyndall cone is the name given to this.