Light is a type of energy that causes our eyes to experience vision and allows us to perceive various objects in our environment. The light ray could be self-light or reflected light from the object. Luminous objects are those that produce their own light. Sun, bulb, tube light, glow worms, etc. Objects that reflect light from other sources are known as non-luminous objects. They don’t produce their own light. Moon, tree, table, and painting, for example. Light can behave as a ray (reflection), a wave (interference), or a diffraction particle (photoelectric effect). Before discussing the scattering of light we’ll have some related concept

What is Refraction of Light?

The change in direction of a wave travelling through one medium to another is known as refraction.

One of the most well-known occurrences is light refraction, although other waves, such as sound and water waves, can also refract. Because of refraction, we can employ optical equipment such as magnifying glasses, lenses, and prisms. Light refraction allows us to focus light on our retina.

Some facts related to Atmospheric Refraction are: 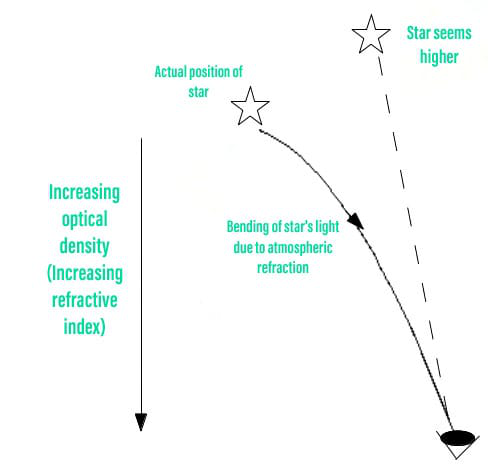 A portion of the light is absorbed by the medium’s particles when it goes from one medium to another, such as air or a glass of water, followed by subsequent radiation in a specific direction. This phenomenon is known as light scattering.

The intensity of scattered light is influenced by particle size and light wavelength. Shorter wavelengths and higher frequencies scatter more due to the waviness of the line and its interaction with a particle. A line is more likely to collide with a particle if it is wavy. Longer wavelengths, on the other hand, have a lower frequency and are more straight, which means they have a smaller likelihood of colliding with a particle. In the afternoon, the bending of multicolored light may be seen due to refraction and total internal reflection of light. The wavelength of sunlight generates different colors in different orientations. Rayleigh’s scattering theory explains the red color of the sun in the morning and the blue color of the sky.

Different forms of Scattering of light

Light dispersion takes place in many forms that are discussed below as:

Practical Applications of Scattering of Light

Problem 1: What color does the clear sky appear to be during the day? Give an explanation.

Blue is the colour of the sky throughout the day. This is because of the size of air molecules and other fine particles in the atmosphere is smaller than the wavelength of visible light. Due to this, these particles scatter light rays of shorter wavelengths at the blue end more efficiently than light rays of longer wavelengths at the red end. That is why the scattered blue light gives us the impression of a blue sky when it enters our eyes.

Problem 2: What is meant by scattering of light?

Light scattering is the spreading of light in different random directions. Light scatters when it encounters various types of suspended particles along its path .The colour of scattered light is determined by the size of scattering particles in the environment.

Problem 3: Why does the sun appear reddish early in the morning?

At daybreak, the sun rises near the earth’s horizon (early in the morning). Light from the sun near the horizon must travel through vast layers of air and a great distance via the earth’s atmosphere before reaching our sight. The particles in the atmosphere scatter most of the blue light rays with shorter wavelengths near the horizon. As a result, we are exposed to red light with longer wavelengths. As a result, the sun takes on a crimson colour.

Problem 4: Why red colour is used to make a danger signal or sign?

When red collides with small fog and smoke particles, it scatters the most since it has the longest wavelength (visible spectrum). As a result, we can see the red colour clearly even from a great distance

Problem 5: On a foggy day, why does the driver use orange lights instead of white lights?

When a driver uses white light while driving in fog, the tiny droplets of water scatter a lot of blue light. This diffused blue light reduces visibility and makes driving a challenge. Orange light does not scatter due to its larger wavelength, allowing the motorist to see clearly.