Colloids or Colloidal solutions or Colloidal systems are a mixture in which a component made up of insoluble particles that are scattered at a microscopic scale is suspended within another component. In chemistry, the mixture of two substances, in which one substance is separated into minute particles (or colloidal particles) and dispersed over another substance is called the Colloid. Colloids can be of various types like Sol, Emulsion, Foam, Aerosol, Lyophobic Sols, Lyophilic Sols, etc. Hence, this article on Colloids helps to understand various concepts of colloids like Classification, Preparation, Characteristics, Applications, Examples, and FAQs!

A solution in which the size of solute particles is intermediate between those in true solution and suspension is called Colloids. Simply, colloids are the mixtures where one substance is split into minute particles which are dispersed throughout a second substance. e.g. Soap solution, milk, blood, etc are some of the examples of colloids.

Colloids (also colloidal solutions or colloidal systems) are mixes of microscopically distributed insoluble particles of one material floating in another. A colloid’s suspended particles can range in size from 1 to 1000 nanometres (or 10-9 meters).

The suspended particles in a combination must not settle in order for them to be classed as a colloid (in the manner that the particles of suspensions settle at the bottom of the container if left undisturbed). Colloidal solutions are known to show the Tyndall Effect, a phenomenon in which light beams impacting on colloids are dispersed as a result of interactions between the light and the Colloidal component. 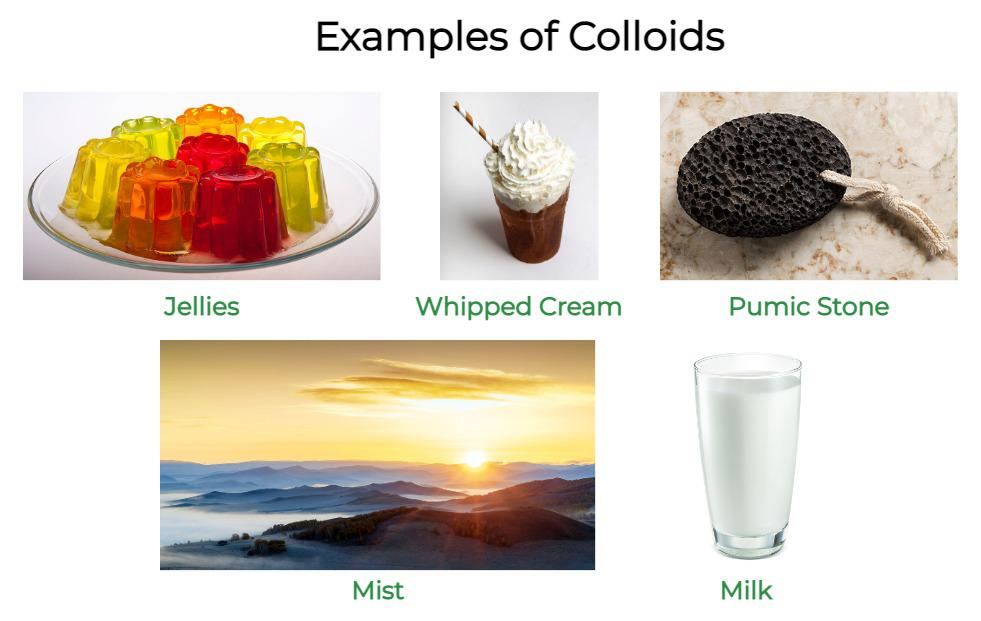 Colloids are classified into different classes based on different conditions:

Classification of Colloids on the Basis of Physical States

Classification of Colloids on the Basis of Interaction

Classification of Colloids on Properties of Sol Particles

Classification Based on Dispersion Medium

The colloids which are stable are known as lyophilic sols, in these, the strong forces of attraction take place between the dispersed phase and dispersion medium. Some of the major methods to prepare colloids are as follows:

Small solute particles are condensed in this process to create a dispersed phase particle.

Large particles of material (suspension) are broken down into smaller particles using these procedures. The procedures listed below are used:

Colloids show a phenomenon known as the Tyndall effect, which John Tyndall identified in 1869. When we shine a bright converging beam of light through a dark colloidal solution, the path of the beam is lit with a blue glow. The scattering of light by colloidal particles is referred to as the Tyndall effect, and the lighted route is referred to as the Tyndall cone. The distributed colloidal particles scatter the light that falls on them, producing emissions similar to ultraviolet and visible radiations. These dispersed radiations are lit. 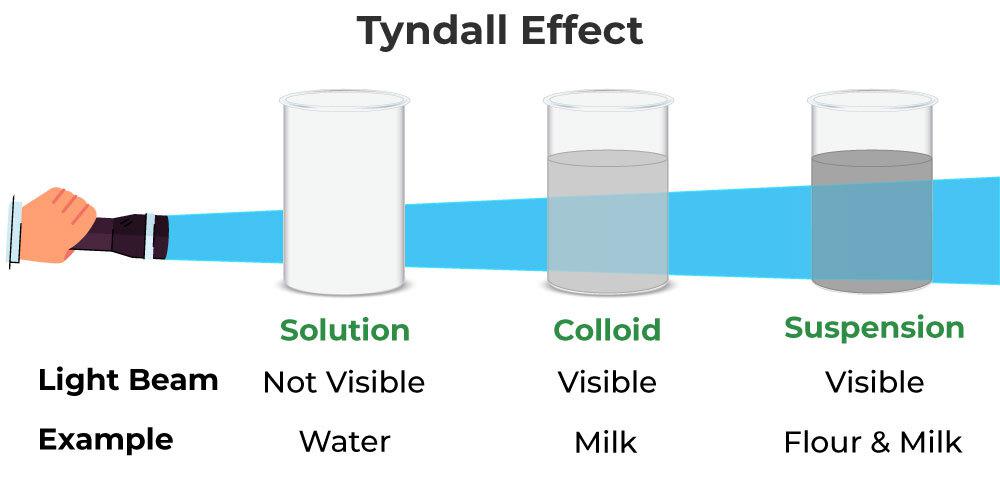 Thus, this gives momentum to the particles, causing them to travel ahead and collide with another particle. Collisions cause the colloidal particle to travel in a random zigzag pattern.

Question 1: Why is Milk a colloid?

Due to the charged gap particles that remain suspended in the liquid, milk is a colloid. Milk is a colloid, despite having the appearance of being a homogeneous mixture, since it contains tiny globules of protein and fat that do not separate apart after standing due to the (often negatively) charged particles.

Question 2: What are the changes that may occur in a substance or matter?

Question 3: What is the precaution that should be taken during the dialysis process?

During the process of dialysis, the distilled water in the container should be frequently changed to prevent the accumulation of crystalloids. Otherwise, the impurities will get diffused back.

Question 4: What is the application of colloids in industrial products?

The application of colloid in industrial products are as follows:

Question 5: Which substance is used to reduce the pore size of filter paper for ultrafiltration?

As filter paper have a large pore size which is not efficient for the filtration of colloid so, to reduce the size of pores collodion solution (cellulose nitrate solution) is used.

Preparation and Purification of Colloids