Separation of Mixtures or method of separation is the process of separating or extracting different components of a mixture using some physical methods. The type of mixture and variations in the chemical characteristics of the mixture’s components determine the separation method to be used. Separation of mixtures is often needed to get rid of unwanted or harmful components and to separate the useful components from the non-useful ones. Some of the methods of the mixtures explained in detail in this article are Filtration, Hand-picking, Threshing, Winnowing, Sieving, Sedimentation and decantation, Magnetic separation, Centrifugation, Evaporation, Distillation, and many more.

Method of Separation of Mixtures

Different methods of separation are used depending on the type of mixture. Some commonly used methods for separation include:

Let us understand them in more detail below.

Separation of Mixtures by Sublimation

A mixture with one sublimable volatile component and one non-sublimable component—commonly referred to as impurity—can be separated using the sublimation process. 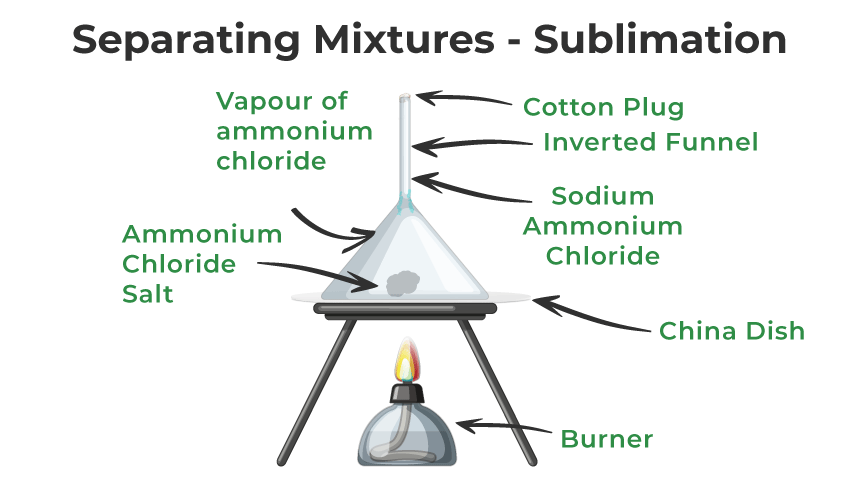 Separation of Mixtures by Evaporation

Evaporation is a technique for separating a mixture, most commonly a solution of a solvent and a soluble solid. The solution is heated until the organic solvent evaporates, turning into a gas and mostly leaving behind the solid residue in this method. 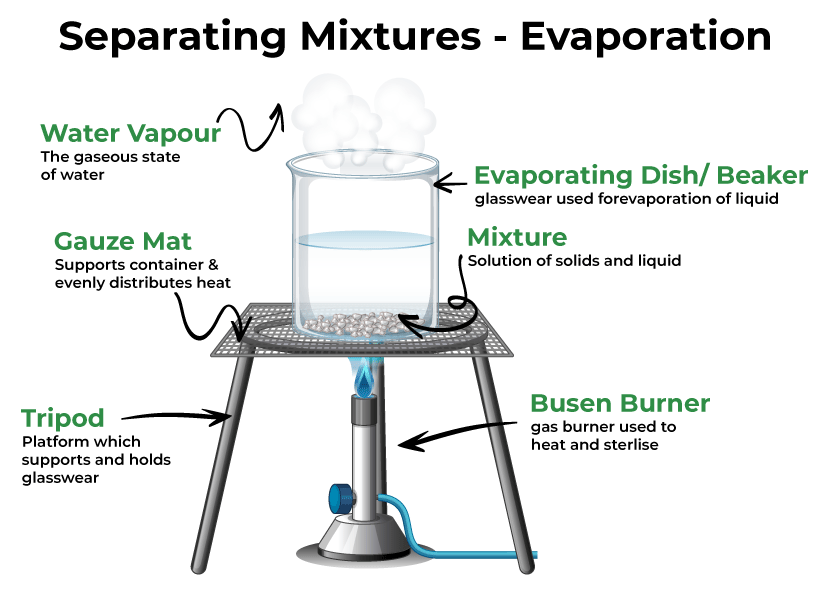 Separation of Mixtures by Handpicking 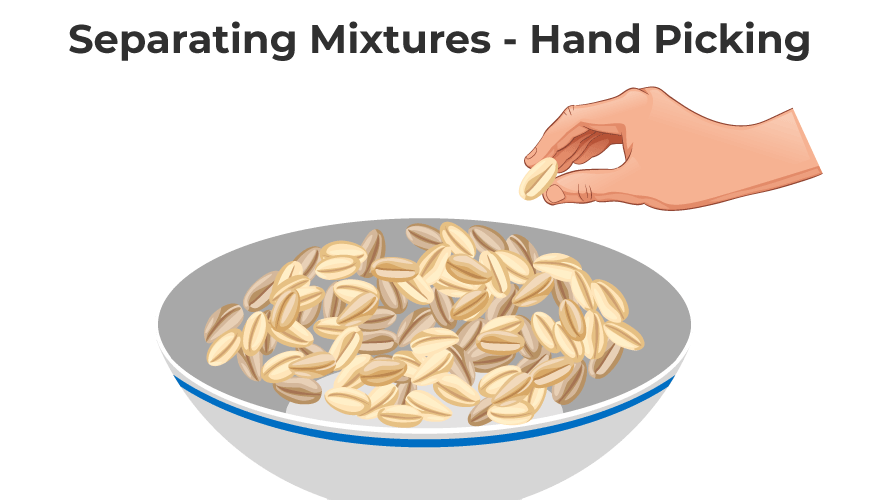 Food grains with small pieces of stone are transported in a flat container. Hands pick up the stones from the grains one by one and throw them away. Only food grains remain after all the stone fragments have been removed.

Separation of Mixtures by Threshing

When a food grain crop, such as wheat or paddy, reaches maturity, it is harvested from the field. The harvested crop is then sun-dried. We receive bundles of dried crop plant stems or stalks with grains attached at the top. A thin layer of chaff covers the grains attached to the stems or stalks. Each stalk is densely packed with chaff-covered grains. Grains are separated from stems and stalks, as well as chaff. 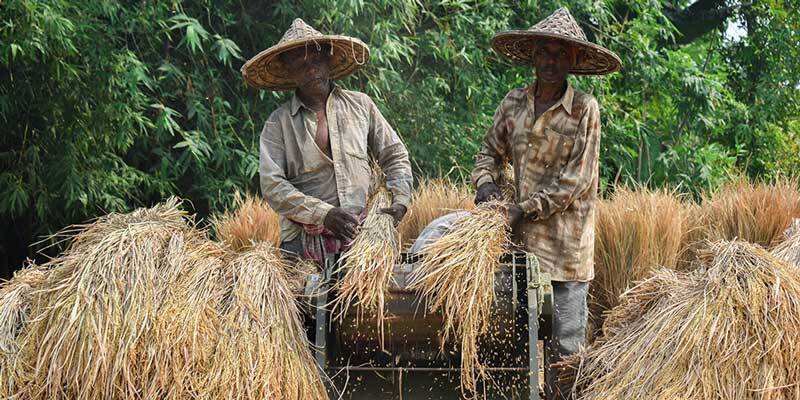 Crop plant stalks and stems, as well as chaff, are soft materials, whereas grains are extremely hard. Because the stalks and chaff are soft, they can be broken into pieces when beaten, but the grains are unaffected. Threshing is accomplished by holding bundles of stems in one’s hands and striking them against a hard surface. As a result, the grains separate from the stems.

Threshing is also done with the assistance of cattle. The harvested and dried crop plants are spread on the ground in a small area, and various cattle such as buffaloes and camels are made to walk in circles over them for an extended period of time. The cattle’s feet crush the stems or stalks, separating the grains from the stems. This crushing also breaks the chaff surrounding the grains, allowing the grains to be separated from the chaff. During the threshing process, the stalks are reduced to very small pieces known as hay, which is used as dry fodder for cattle. The husk is made up of broken chaff. For the threshing process, a motorized machine known as a thresher is used.

Separation of Mixtures by Winnowing

When a farmer threshes wheat in his field, he gets a mixture of wheat grains and husk. Husk must be removed from wheat grains before they can be used. The husk is separated from the wheat grains by winnowing.

Winnowing is the process of separating husk from grains using the wind. Wheat grains are heavy, whereas husk is light. Winnowing is accomplished with a winnowing basket. The farmer stands on a higher platform than the ground and shakes his winnowing basket continuously to allow the mixture of wheat grains and husk to fall from a height. 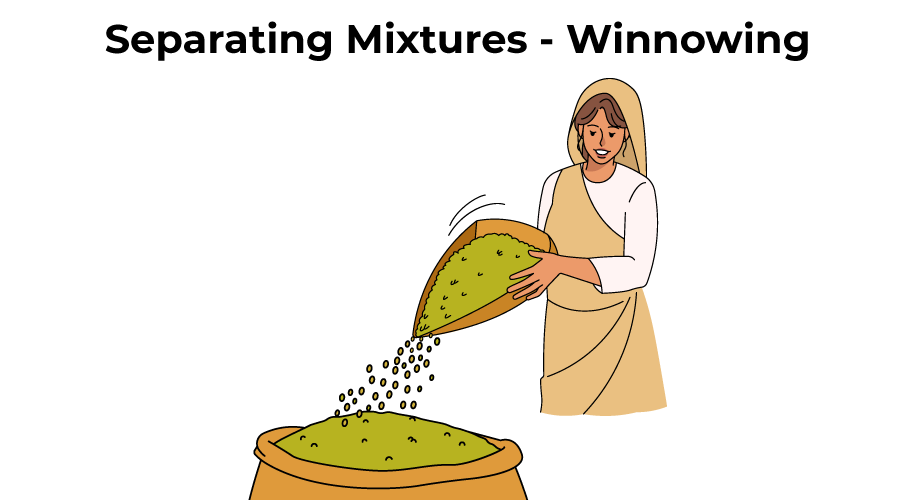 Winnowing is a technique used to remove the husk from grains such as wheat and rice. We cannot separate small stone particles from wheat using the winnowing process. This is due to the fact that stone particles are quite heavy and cannot be carried a long distance by wind.

Separation of Mixtures by Sieving

A sieve is a shallow container with small holes at the bottom. In some cases, an iron mesh can also be used as a sieve. Sieving is the process of parting a mixture using a sieve. Sieving is used to separate solid mixtures that contain components of varying sizes.

The mixture, which contains components of varying sizes, is placed in a sieve, and the sieve is continuously moved back and forth. The larger particles of the mixture cannot pass through the sieve’s small holes and thus remain trapped in the sieve. 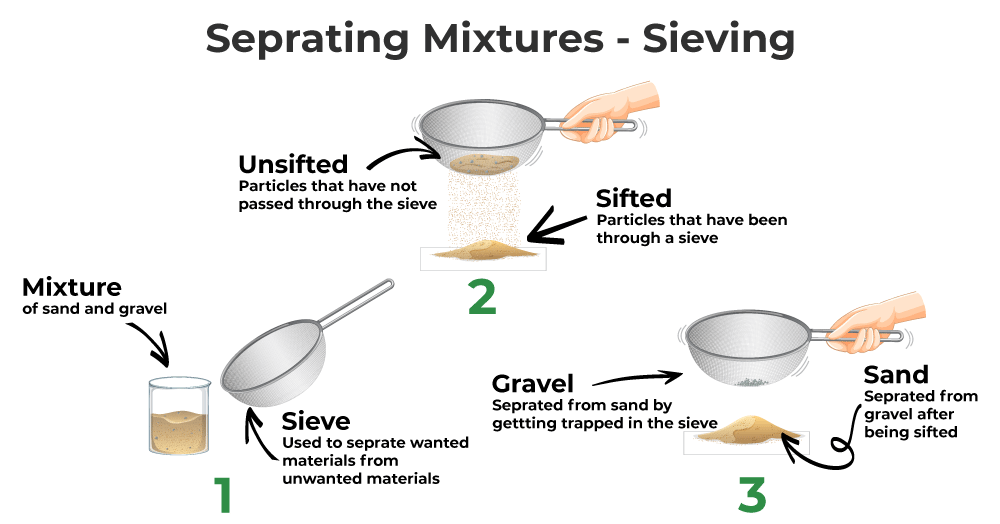 Separation of Mixtures by Distillation

Distillation is a fast way to separate mixtures of two or more pure liquids. Distillation is a purification method that involves vaporizing the constituents of a liquid mixture, then condensing and isolating them.

A mixture is heated in simple distillation, and the most volatile component vaporizes at the lowest temperature. The vapor condenses back into liquid after passing through a cooled tube (a condenser). The collected condensate is known as distillate. 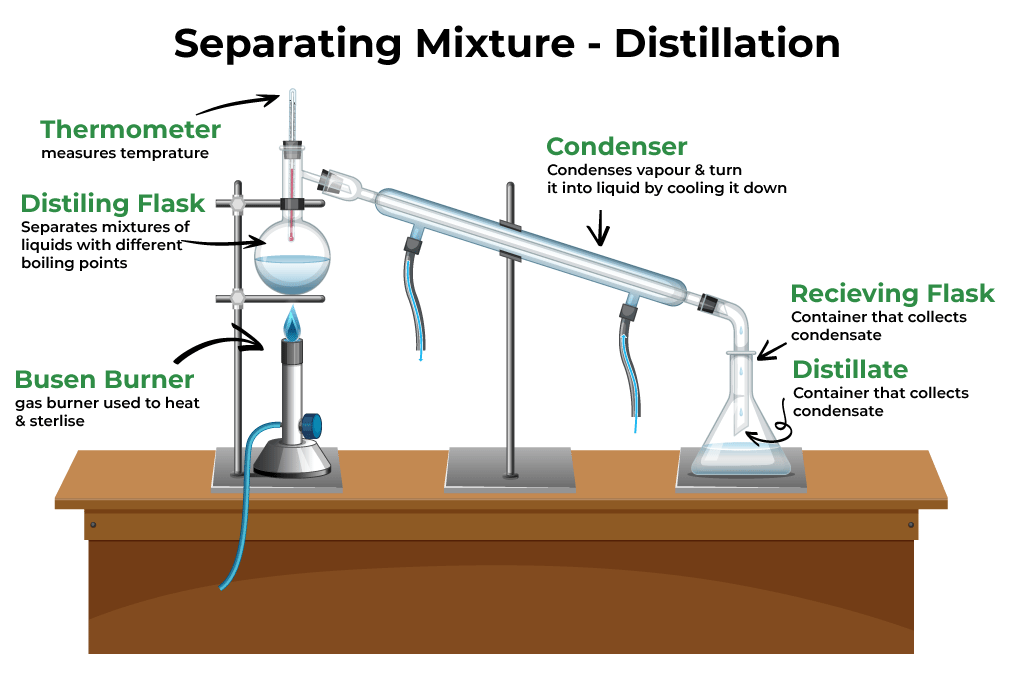 Several important pieces of equipment are depicted in the figure above. A heat source, a test tube with a one-hole stopper attached to a glass elbow, and rubber tubing are all present. The rubber tubing is inserted into a collection tube filled with cold water. Other more complicated distillation assemblies can also be used, particularly to separate mixtures of pure liquids with similar boiling points.

Separation of Mixtures by Filtration or Sedimentation

The most common method of separating a liquid from an insoluble solid is filtration. Consider the case of a sand-water mixture. In this case, filtration removes solid particles from the liquid. Various filtering agents, such as filtering paper or other materials, are commonly used. 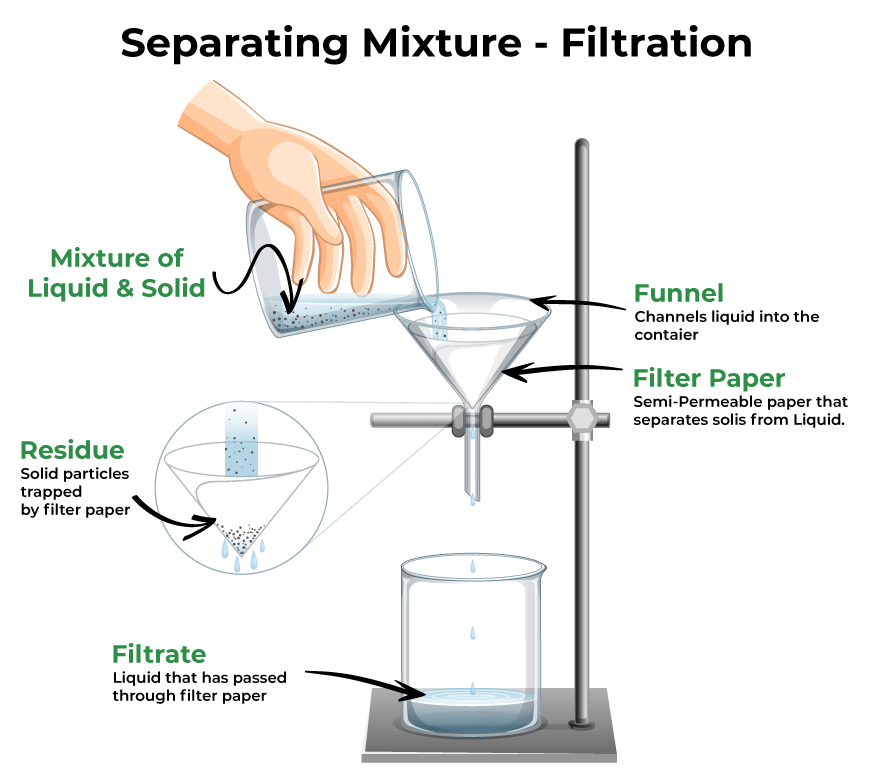 Sedimentation is the process by which heavier impurities in a liquid, typically water, settle to the bottom of the container containing the mixture. It takes some time to complete the process. 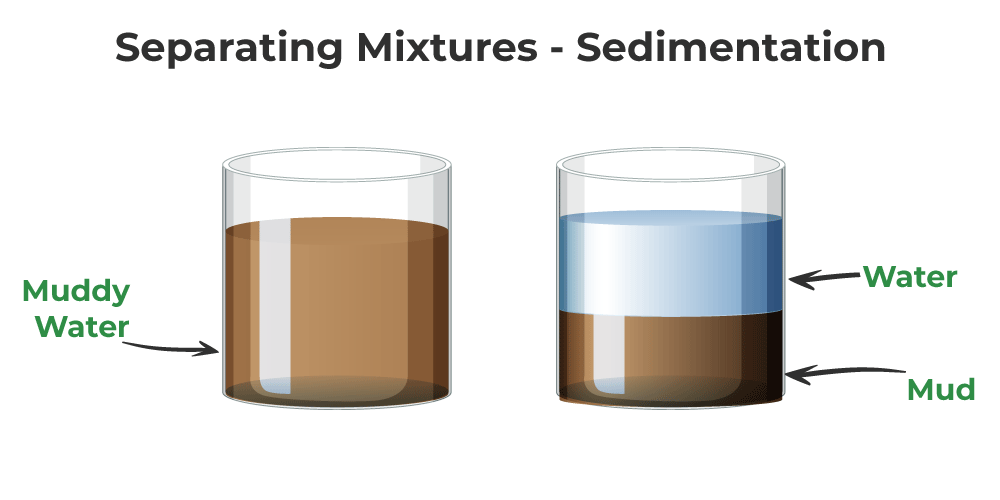 Separation of Mixtures by Separating Funnel

This method is used with immiscible liquids (those that do not mix together). The mechanism works by exploiting the unequal density of the particles in the mixture. Using this technique, oil and water can be easily separated. In the process, a separating funnel is used. 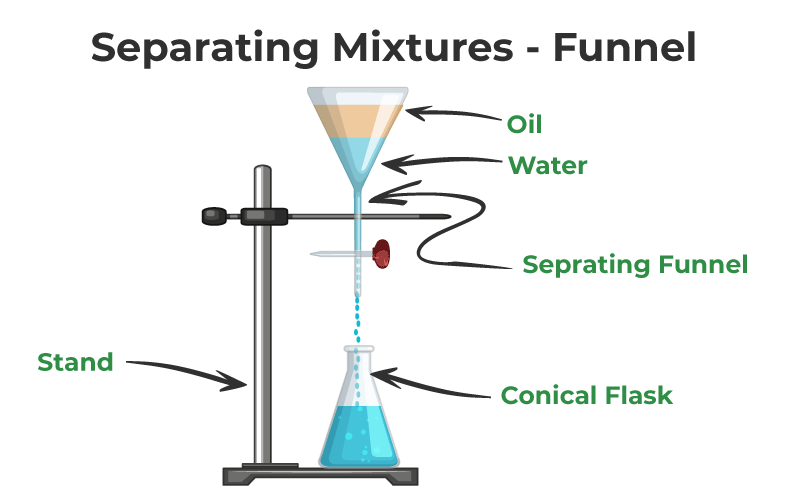 Separation of Mixtures by Magnetic Separation

Magnetization is a method of attracting magnetic materials. Magnetic separation is the process of separating mixtures of two solids, one of which has magnetic properties.

It is based on the distinction between magnetic and non-magnetic materials. Iron particles in the mixture of iron and Sulphur are attracted to the magnet and separate from the non-magnetic substance.

FAQs on Separation of Mixtures

Question 1: What is the principle used in the Separation of Mixtures?

A distinctive property of one of the mixture’s components is used as the basis for the separation of mixture principle. For example, using a magnet to separate iron bits mixed with sand is possible because iron is drawn to the magnet.

Question 2: Explain why there is a need for the Separation of Mixtures.

The separation of mixtures is needed because to separate the useful from the undesirable or potentially harmful ones, we must separate the various components of a mixture.

Question 3: What is Separation of Mixture mean?

Question 4: What method will you use to separate a sand and sugar mixture?

Question 5: Explain how to separate a sand-salt mixture.

To separate common salt and sand from a mixture, the processes of filtration and evaporation are used. Filtration can separate sand from a sand-salt solution mixture (salt dissolved in water). After filtration, sand remains as a residue on the filter paper. Common salt can now be obtained by boiling the filtrate. When water boils, it evaporates completely, leaving only salt behind. This is referred to as evaporation.

Question 6: What method will you use to separate a salt and sugar mixture?

Question 7: What is the name of the solvent used to separate a Sulphur and Carbon mixture?

To separate the carbon and Sulphur mixture, a carbon disulphide solution can be used. Carbon is undissolved in the solution, but Sulphur dissolves. This mixture is then filtered to remove the carbon before being evaporated to extract the Sulphur.

Question 8: What is the method and process to separate a mixture of sodium chloride and sand?

The filtration and distillation processes can be used to separate a mixture of sodium chloride and sand in water. When the solution is filtered, the sand remains on the filter paper while the liquid passes through. The solution is then distilled. During distillation, water evaporates, then condenses and cools to become liquid. Water will be collected in the beaker. Meanwhile, salt will remain in the distillation flask as a residue.

Question 9: What method will you use to separate iodine from an iodine-and-common-salt mixture?

is the most effective method for separating iodine from common salt (NaCl). Because iodine is sublimable, it will change from solid to vapour when slightly heated, and the iodine vapours can be collected while common salt remains solid.

Question 10: Explain the method to separate a mixture of iron filling and powdered carbon.

Separation of Mixtures of Two or More Liquids

How to separate a Mixture of Two Solids?