Clustering algorithms like K-means clustering do not perform clustering very efficiently and it is difficult to process large datasets with a limited amount of resources (like memory or a slower CPU). So, regular clustering algorithms do not scale well in terms of running time and quality as the size of the dataset increases. This is where BIRCH clustering comes in.

Balanced Iterative Reducing and Clustering using Hierarchies (BIRCH) is a clustering algorithm that can cluster large datasets by first generating a small and compact summary of the the large dataset that retains as much information as possible. This smaller summary is then clustered instead of clustering the larger dataset.

CF Tree:
The CF tree is the actual compact representation that we have been speaking of so far. A CF tree is a tree where each leaf node contains a sub-cluster. Every entry in a CF tree contains a pointer to a child node and a CF entry made up of the sum of CF entries in the child nodes. There is a maximum number of entries in each leaf node. This maximum number is called the threshold. We will learn more about what this threshold value is.

Implementation of BIRCH in Python:
For the sake of this example, we will generate a dataset for clustering using scikit-learn’s make_blobs() method. To learn more about make_blobs(), you can refer to the link below: https://scikit-learn.org/stable/modules/generated/sklearn.datasets.make_blobs.html

Code: To create 8 clusters with 600 randomly generated samples and then plotting the results in a scatter plot. 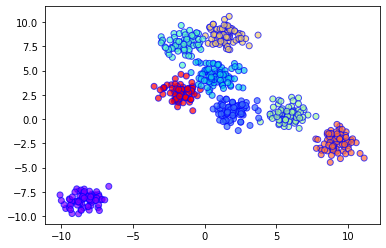