How to Pass Additional Context into a Class Based View (Django)?

Passing context into your templates from class-based views is easy once you know what to look out for. There are two ways to do it – one involves get_context_data, the other is by modifying the extra_context variable. Let see how to use both the methods one by one.

Illustration of How to use get_context_data method and extra_context variable to pass context into your templates using an example. Consider a project named geeksforgeeks having an app named geeks.

Inside the models.py add the following code:

After creating this model, we need to run two commands in order to create database for the same.

Create the folder named templates inside the app directory(geeks) , inside this folder add the file named Intro.html and add the following code:

Inside the views.py file  add the following code:

Inside the urls.py file of project named geeksforgeeks add the following code:

Rewrite the views.py flle by adding the following code:

By both the methods you will see the same output. Let’s check what is there on http://localhost:8000/, before doing this don’t forget to add some data to your model. 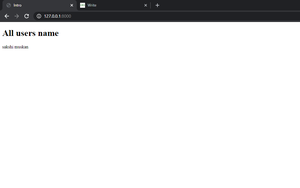