Concept of B-spline curve came to resolve the disadvantages having by Bezier curve, as we all know that both curves are parametric in nature. In Bezier curve we face a problem, when we change any of the control point respective location the whole curve shape gets change. But here in B-spline curve, the only a specific segment of the curve-shape gets changes or affected by the changing of the corresponding location of the control points.

In the B-spline curve, the control points impart local control over the curve-shape rather than the global control like Bezier-curve. 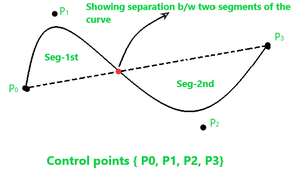 You can see in the above figure that only the segment-1st shape as we have only changed the control point P1, and the shape of segment-2nd remains intact.

B-spline Curve :
As we see above that the B-splines curves are independent of the number of control points and made up of joining the several segments smoothly, where each segment shape is decided by some specific control points that come in that region of segment. Consider a curve given below –

Attributes of this curve are –

Knots in B-spline Curve :
The point between two segments of a curve that joins each other such points are known as knots in B-spline curve. In the case of the cubic polynomial degree curve, the knots are “n+4”. But in other common cases, we have “n+k+1” knots. So, for the above curve, the total knots vectors will be –

These knot vectors could be of three types –

B-spline Curve Equation : The equation of the spline-curve is as follows –

And following are some conditions for xi are as follows –

Some cases of Basis function :

Complete Interview Preparation
View Details
System Design-Live Classes for Working Professionals
View Details
Data Structures & Algorithms- Self Paced Course
View Details
Most popular in Misc
More related articles in Misc
We use cookies to ensure you have the best browsing experience on our website. By using our site, you acknowledge that you have read and understood our Cookie Policy & Privacy Policy