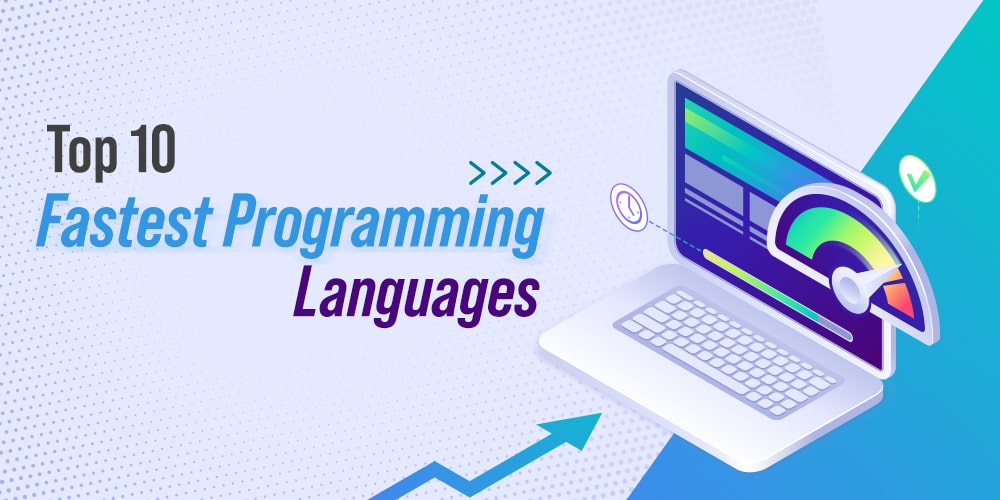 Cross-Platform: In some object-oriented languages like Java and C#, the source code would undergo both compilation and interpretation. Because of cross-platform usage and conversion into byte code, speed will be compromised here, which makes the cross-platform languages slower than other languages.

Security: Some languages like C are found to have a lot of vulnerabilities. Again it boils down to the compiler’s job to check for these vulnerabilities. Studies show that still, some popular languages are susceptible to many major errors. For example, C suffers from buffer errors, PHP is vulnerable to Cross-site scripting, and Python to input validation. In order to tackle these errors, some compilers are designed with additional security features. So the source code goes through various layers of security checks which makes the compilation process a bit slow. So the fastest language in this list is not the best in terms of security but better than others in execution time.

There may be cases in which one language might be faster than the other language but for the majority of the cases, the below list is acceptable.

F# is an open-source, cross-platform programming language. F# is a .NET language and it can be used for creating web applications, mobile applications, data science, and cloud. It is almost similar in speed to C# but the asynchronous code runs faster in C# than in F#. The compiler is native in C# and optimized code can be generated. But in F#, the compilers are not native. This is the reason why F# comes below C#.

C# is a general-purpose multi-paradigm programming language. C# can be used for creating web applications, mobile applications, augmented reality/virtual reality (AR/VR) applications, and web services. C# has a garbage collector which is an efficient memory management technique but in the aspect of program execution, it takes more time when compared with C++. C# and Java are more or less of the same speed but the Java runtime is comparatively faster than C# in some cases.  Though C# has many good features and functionality, it is a bit lower in the aspect of speed when compared with a few languages.

Java is one of the widely used languages and it is very fast too. Despite using Java Virtual Machine, it is still faster than its counterparts like C#. It is not as fast as C or C++ because it is platform-independent. In java the source code is first converted into bytecode by the compiler, next java invokes the Java interpreter known as Java Virtual Machine. Then the class loader loads the byte code into the OS. Then the bytecode verifier of java checks the byte code for security issues. Then finally the execution engine converts the byte code into machine code. Since the languages like C# and java have to go through so many steps while compiling, they are comparatively slower than other languages in this list.

Learn one of the most important programming languages, Java with Geeksforgeeks Java Programming Foundation – Self-Paced Course, which has been specially curated for beginners so that they can get knowledge of everything from scratch. Enroll now and get classes from our best mentor Sandeep Jain.

Ada is a static, high level and object-oriented language. It supports concurrent programming and is more reliable. Even though it is very fast, it does not compromise the security aspect. Ada compilers can find the errors more efficiently. Some programmers say that programs written in Ada have fewer bugs and are executed faster. In order to achieve reliability, it compromises speed and that’s why it could not make it to the top of the list.

Julia is a high-level, high-performance dynamic programming language. Julia can be used to build applications and microservices. Julia supports multiple platforms. Other programs can integrate Julia. It is fast because of its design decisions and JIT compiler. The reason why it does not top the list is that it is a dynamic language.

Fortran is a general-purpose language used for scientific calculations. It is known for its high performance and is used in ranking the fastest supercomputers. Fortran is widely used for numerical programming since it is faster. Since Fortran spends a lot of time reading and writing the data, it is slower than the three languages below on this list.

Rust is a high-level, multi-paradigm language designed for performance and safety. Rust is very fast because it has no runtime or garbage collector. It is not slower than C++ because it is inherently safer. The same safety cannot be achieved in C++ by the use of pointers but rust is safer by default. So it undergoes various safety checks while compiling. The checks are only run time and have zero performance on the language. The motto of being zero cost abstractions. As a result, it is a safer language that is not slower by nature. Therefore it is as fast as C++ and C.

C++ is one of the most efficient and fastest languages. It is widely used by competitive programmers for its execution speed and Standard Template Libraries(STL). Even though C++ is more popular, it suffers from vulnerabilities like buffer error. C++ executes at more or less the same speed as its predecessor C. The only thing which makes C++ below C in speed is that it is safer and more complex than C, therefore the C++ code undergoes security checks by default which makes it slower than C.

Start your journey of learning the fastest and most efficient language C++ with Geeksforgeeks C++ Programming Foundation – Self-Paced and ace the basics of the language by studying interesting topics such as input/output in C++, flow control, operators, loops & more.

The special thing about C is, that there is nothing special. It is simple and very close to assembly language. In C, a lot of instructions are directly mapped to assembly instructions. But the extreme speed of the C language comes by compromising security. C is known to have the largest number of vulnerabilities among popular languages. It executes unsafe instructions without cross-checking. Like C++ it also suffers from buffer error. Though C has these disadvantages, it still tops the list because of its fast execution speed.