Prerequisite – Basic Network Attacks, Types of Viruses
The security of a computer system is a crucial task. It is a process of ensuring the confidentiality and integrity of the OS. Security is one of most important as well as the major task in order to keep all the threats or other malicious tasks or attacks or program away from the computer’s software system.
A system is said to be secure if its resources are used and accessed as intended under all the circumstances, but no system can guarantee absolute security from several of various malicious threats and unauthorized access.

The security of a system can be threatened via two violations:

Security violations affecting the system can be categorized as malicious and accidental threats. Malicious threats, as the name suggests are a kind of harmful computer code or web script designed to create system vulnerabilities leading to back doors and security breaches. Accidental Threats, on the other hand, are comparatively easier to be protected against. Example: Denial of Service DDoS attack.

Security can be compromised via any of the breaches mentioned:

Security System Goal:
Henceforth, based on the above breaches, the following security goals are aimed:

Threats can be classified into the following two categories:

Types of System Threats –
Aside from the program threats, various system threats are also endangering the security of our system:

1. Worm:
An infection program that spreads through networks. Unlike a virus, they target mainly LANs. A computer affected by a worm attacks the target system and writes a small program “hook” on it. This hook is further used to copy the worm to the target computer. This process repeats recursively, and soon enough all the systems of the LAN are affected. It uses the spawn mechanism to duplicate itself. The worm spawns copies of itself, using up a majority of system resources and also locking out all other processes.

The basic functionality of the worm can be represented as: 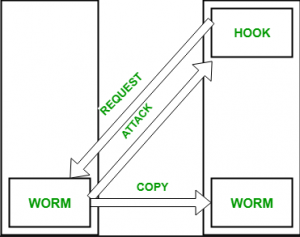 2. Port Scanning:
It is a means by which the cracker identifies the vulnerabilities of the system to attack. It is an automated process that involves creating a TCP/IP connection to a specific port. To protect the identity of the attacker, port scanning attacks are launched from Zombie Systems, that is systems that were previously independent systems that are also serving their owners while being used for such notorious purposes.

3. Denial of Service:
Such attacks aren’t aimed for the purpose of collecting information or destroying system files. Rather, they are used for disrupting the legitimate use of a system or facility.
These attacks are generally network-based. They fall into two categories:
– Attacks in this first category use so many system resources that no useful work can be performed.

For example, downloading a file from a website that proceeds to use all available CPU time.
– Attacks in the second category involve disrupting the network of the facility. These attacks are a result of the abuse of some fundamental TCP/IP principles.
the fundamental functionality of TCP/IP.

Security Measures Taken –
To protect the system, Security measures can be taken at the following levels:

Usually, Anti Malware programs are used to periodically detect and remove such viruses and threats. Additionally, to protect the system from Network Threats, a Firewall is also be used.