Google Authentication and Fetching mails from scratch mean without using any module which has already set up this authentication process. We’ll be using Google API python client and oauth2client which is provided by Google. Sometimes, it really hard to implement this Google authentication with these libraries as there was no proper documentation available. But after completing this read, things will be clear completely.

Now Let’s create Django 2.0 project and then implement Google authentication services and then extract mails. We are doing extract mail just to show how one can ask for permission after authenticating it. 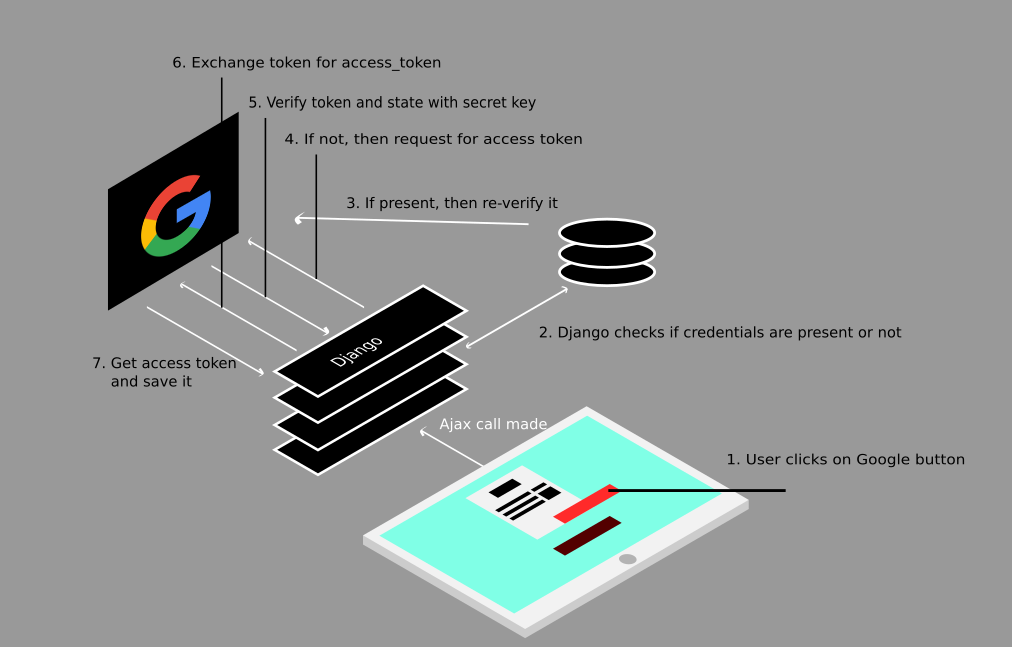 The first step is to create virtual environment and then install the dependencies. So We’ll be using venv:

This command will create one folder myvenv through which we just activated virtual environment. Now type

Then you must see no dependencies installed in it. Now first thing first let’s install Django:

That is Django version which we used but feel free to use any other version. Now next step is to create one project, let’s name it gfglogin:

Since we created one app. Add that app name into settings.py in INSTALLED_APP list. Now we have Django project up running, so let’s migrate it first and then check if there is any error or not.

So after migrating, one should be able to run the server and see the starting page of Django on that particular url. 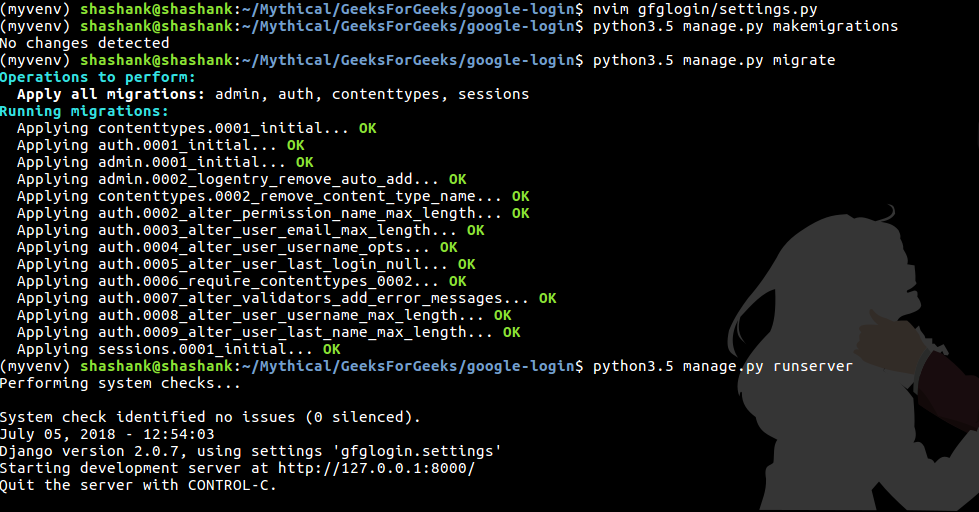 Since we have the project up running successfully, let’s install basic requirements. First, we need googleapiclient, this is needed because we have to create one resource object which helps to interact with the API. So to be precise we will make use of `build` method from it.

Now the second module is oauth2client, this will make sure of all the authentication, credential, flows and many more complex thing so it is important to use this.

And at last, install jsonpickle, (just in case if it is not installed) because it will be used by oauth2client while making CredentalsField.

So these are the only dependencies which we need. Now let’s step into the coding part and see how it works.

Use models to store the credentials which we get from an API, so there are only 2 main field which needed to take care of. First is id , which will be ForeignKey and second is credential which will be equal to CredentialsField. This field needs to be imported from oauth2client. So our models.py will look like:

Currently task and updated_time are simply extra fields added, hence can be removed. So this credential will hold the credential data in the database.

When we import CredentialsField, then automatically __init__ method gets executed at back and if you’ll notice the code in path
/google-login/myvenv/lib/python3.5/site-packages/oauth2client/contrib/django_util/__init__.py Line 233

They are importing urlresolvers so that they can make use of the reverse method from it. Now the problem is that this urlresolvers has been removed after Django 1.10 or Django 1.11, If you are working on Django 2.0 then it will give an error that urlresolvers cannot be found or not there.

Now to overcome this problem we need to change 2 lines, first replace that import from django.core import urlresolvers to from django.urls import reverse

Now you should be able to run it successfully.

After creating these models:

Right now we have only 3 main views to handle requests. First is to show the home page, status, Google button so that we can send requests for Authentication. Second view will get triggered when the google button is clicked, means an AJAX request. Third will be to handle the return request from google so that we can accept the access_token from it and save it in our database.

So right now we need to specify the flow to the API that what permissions we need to ask, what is my secret key and redirect url. So to do that enter:

As you can notice settings.GOOGLE_OAUTH2_CLIENT_SECRETS_JSON, so go to settings.py file and type:

This tells Django that where json file is present. We will later download this file. After specifying the flow, let’s start logic.

Whenever we need to see if someone is authorized or not we first check our database whether that user credentials is already present or not. If not then we make requests to API url and then get credentials.

We use DjangoORMStorage (which is provided by oauth2client) so that we can store and retrieve credentials from Django datastore. So we need to pass 4 parameters for it. First is the model class which has CredientialsField inside it. Second is the unique id that has credentials means key name, third is the key value which has the credentials and last is the name of that CredentialsField which we specified in models.py.

Then we get the value from storage and see if it is valid or not. If it is not valid then we create one user token and get one to authorize url, where we redirect the user to the Google login page. After redirecting user will fill up the form and once user is authorized by google then google will send data to callback url with access_token which we will do later. Now in case, if user credentials was already present then it will re-verify the credentials and give you back the access_token or sometimes the refreshed access_token in case if the previous one was expired.

Now we need to handle the callback url, to do that:

Now inside callback url when we get one response from google then we capture the data and get state from it, state is nothing but the token which we generated by generateToken. So what we do is that we validate the token with secret_key, the token which we generated and with the user who generated it. These things get verified by xsrfutil.validate_token method which make sure that the token is not too old with the time and it was generated at given particular time only. If these things doesn’t work out well then it will give you error else you will go to the next step and share the code from callback response with google so that you can get the access_token.

So this was 2 step verification and after successfully getting the credential we save it in Django datastore by using DjangoORMStorage because through that only we can fetch and store credential into CredentialsField. Once we will store it we can redirect the user to any particular page and that’s how you can get access_token.

Now let’s create one home page which will tell whether the user is logged in or not.

Right now we are assuming that the user is authenticated in Django, means that user is no more anonymous and has info saved in database. Now to have support for the anonymous user, we can remove the checks for credentials in database or create one temporary user.

Coming back to home view, first we will check whether the user is authenticated or not, means that user is not anonymous, if yes then make him do log in else check for credentials first. If user has already logged in from Google then it will show Status as True else it will show False.

Now coming to templates let’s create one. First go to root folder and create one folder named as ‘templates’, then inside that create index.html:

Now this page is very much simplified so no css or styling is there, just one simple link to check. Now you will notice js file also. so again go to root folder and create one directory as static/js/

And inside js create one javascript file main.js:

This js file was used to separate the logic from HTML file and also to make one AJAX call to Django. Now we have all the parts done for views.

In the main project urls means gfglogin/urls.py edit and put:

Because we need to test gfgauth app working. Now inside gfgauth/urls.py type:

As you can see, gmailAuthenticate is for AJAX calls, oauth2callback is for callback url and the last one is home page url. Now before running there are few settings which we haven’t talked about:

In settings.py you need to edit:

So we just specified where templates and static files are present and most importantly where is google oauth2 client secret json file. Now we will download this file.

Head over to Google Developer Console page and create one project and name it anything you like. After creating it, head over to the project dashboard and click on the Navigation menu which is on the top left. Then click on API services and then credentials page. Click on create credentials (you might need to set product name before going ahead so do that first). Now select web application since we are using Django. After this specifies the name and then simply go to redirect URIs and over there type:

And then save it. You need not specify the Authorized Javascript origins so leave it blank for now. After saving it, you will be able to see all your credentials, just download the credentials, it will get saved in some random names so simply reformat the filename and type ‘client_secrets’ and make sure it is of json format. Then save it and paste it on Django project root folder (where manage.py is there).

Now recheck if everything is correct or not. Make sure you have migrated it. Also before going ahead create one superuser so that you are no more anonymous:

Type all the necessary details and then do:

You will see this: 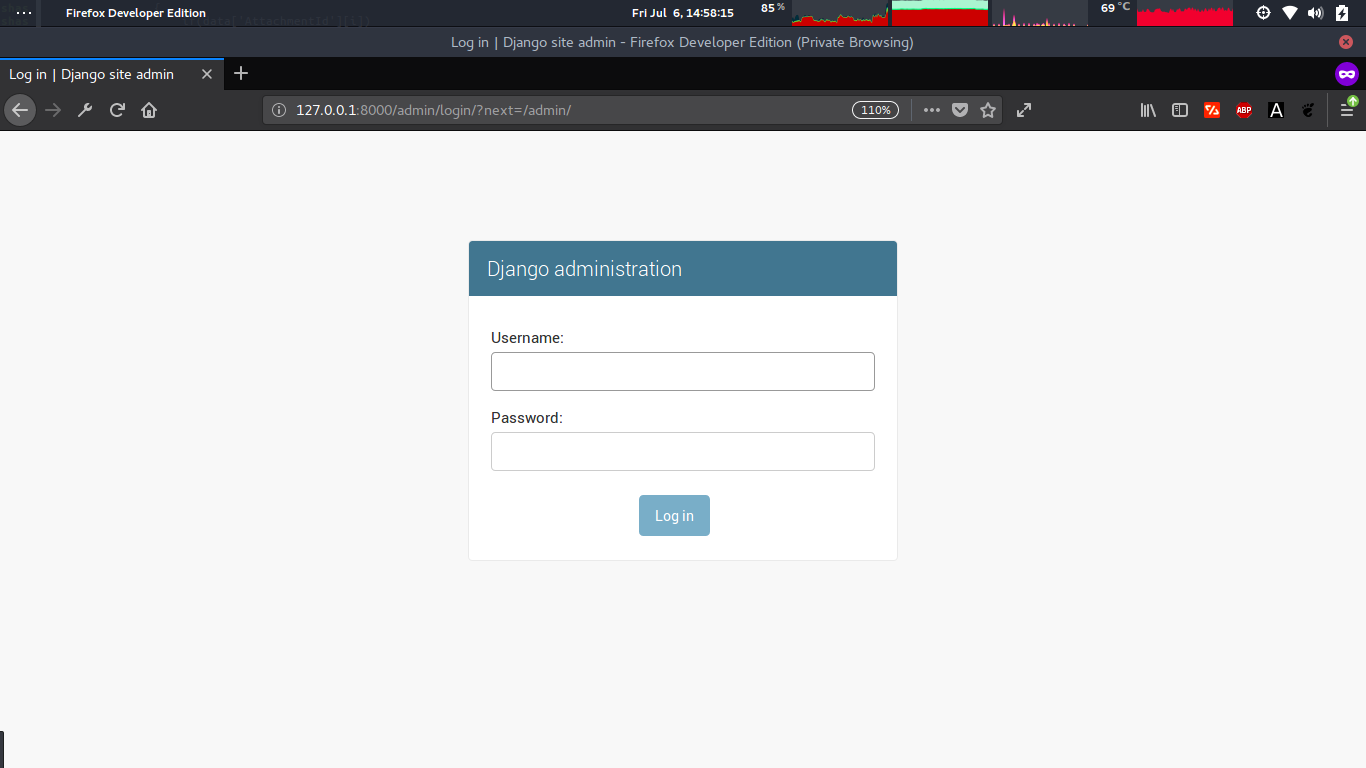 Which is perfectly fine, now type your superuser credentials over here and then you will be able to see the admin dashboard. Just avoid that and again go to http://127.0.0.1:8000

Now you should be able to see the Google link, now click on it and you will see: 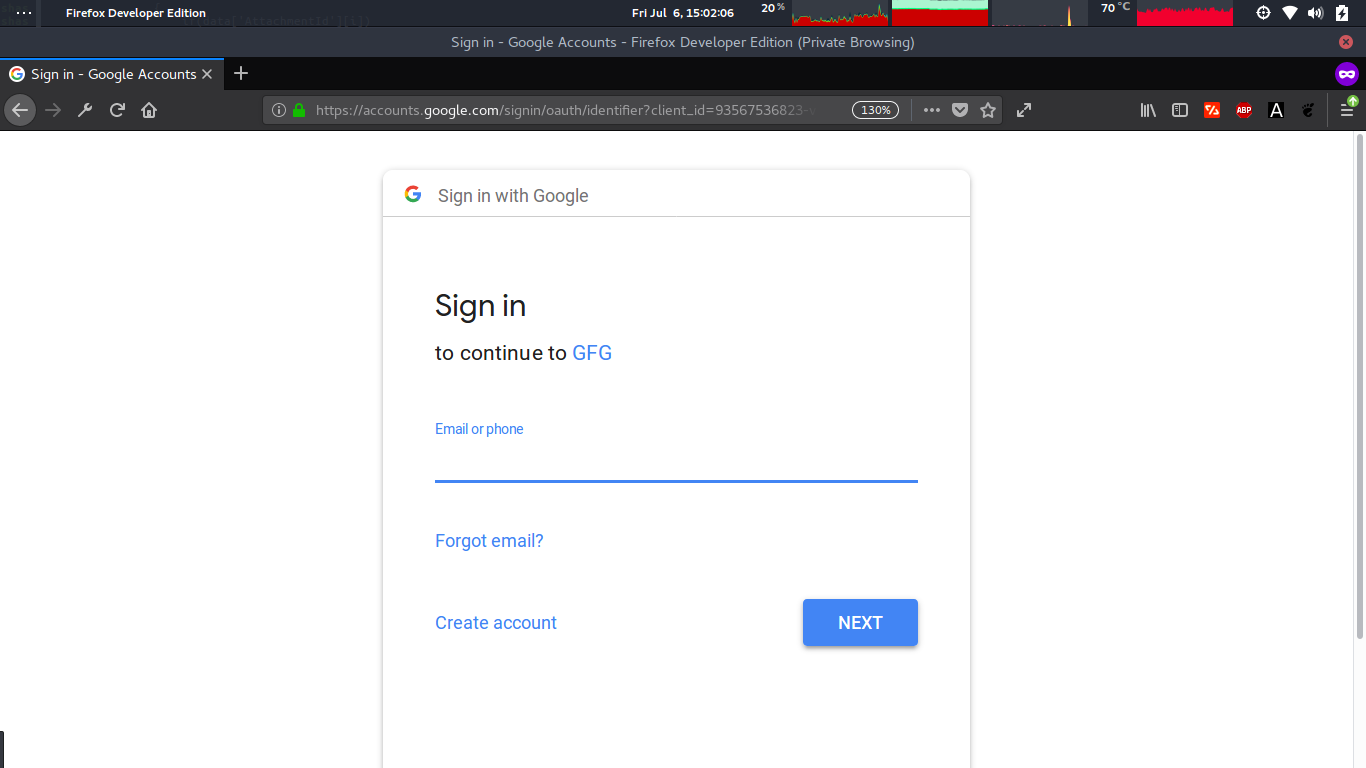 Now as you can see it is saying Sign in to continue to GFG, here GFG is my Project name. So it is working fine. Now enter your credentials and after submitting you will see: 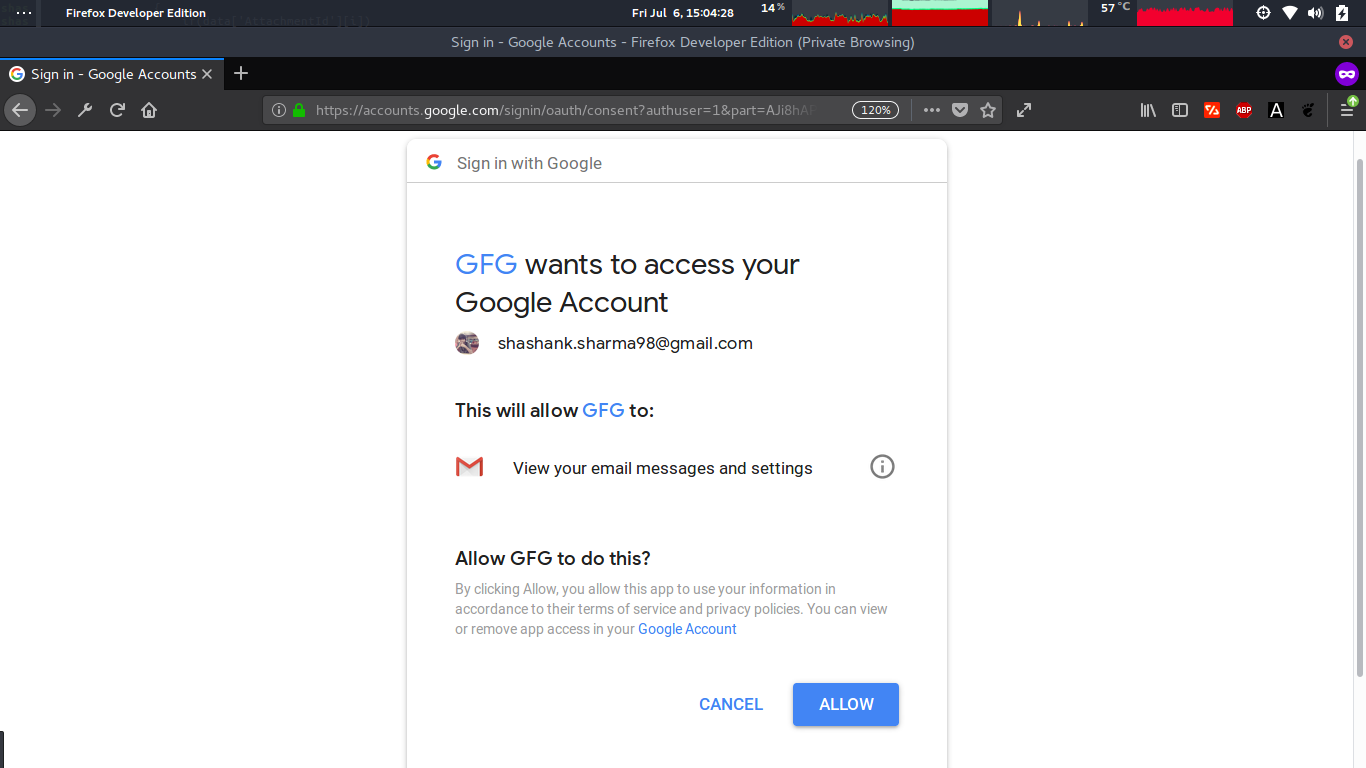 Since we are requesting for mails permission that’s why it is asking the user to allow it. In case if it is showing error then in Google console you might need to activate Gmail API into your project. Now once you will allow it you will get the credentials and get saved inside your database. In case if the user clicks on Cancel then you will need to write a few more codes to handle such flow.

Now in case if you allowed it then you will be able to see the access_token on your console/database. After getting access_token you can make use of this to fetch user email and all other stuff.