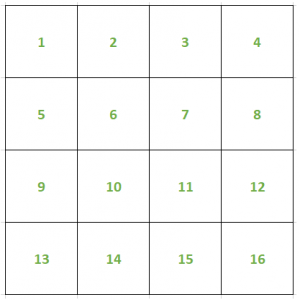 (i) Start of any day, switches in any one of the rows or columns chosen randomly in the table shown above can be toggled all at once (toggle here means if they were ON yesterday, they will be OFF today and vice versa). Or, none of them may be toggled at all.
(ii) No toggling can be done during the day.

The surveillance manager had started off the first day of operation (the initial condition) with cameras 1, 7 and 14 being OFF while all other cameras being ON.

Solution:
Applying each toggle by selecting a row or column and trying to get to the given final conditions as in questions a) and b) is a big task and hence we are forced to think of a strategy and observe carefully what happens after each toggle and if can get some clues, that will be of help to us.
As each switch can only be either ON or OFF, we tend to solve the problem by denoting ON and OFF by 1 and 0 or + and – signs and observing what happens to the sum of values or product of signs after each toggle.
Now we realize that + and – are more helpful as the number of elements in any row or column is even number (4). Because toggle of all signs of a collection of some positive signs and some negative signs both adding up to an even number will not change the resulting sign of their product. Let us examine this strategy further. 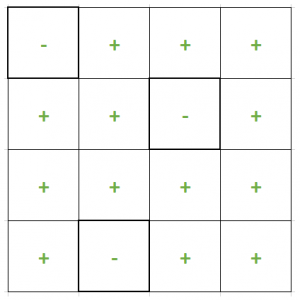 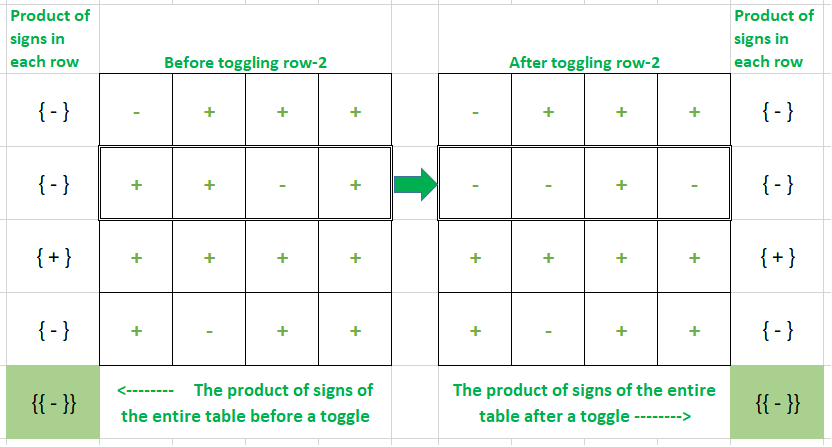 To answer a), we observe that in the given initial configuration the product of signs of the entire table is -ve as shown on the left side of the above figure.
The final configuration sought has cameras 10, 11, 12 and 13 are ON and all others OFF. That can be illustrated following our strategy of sign allocations as shown below: 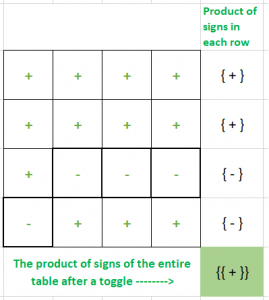 So, let us think of forming two regions as in chess board pattern. As we have 4 switches in each row and column, number of switches of same color in each row or column is two, which is again even. So, this thought process may be helpful. The full table is divided into two regions ‘white region’ and ‘green region’ as shown below. 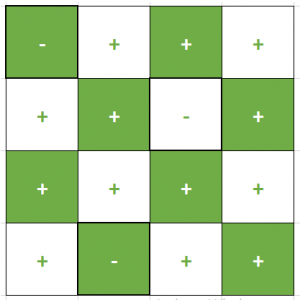 This is illustrated with an example of toggling a column in the following figure. 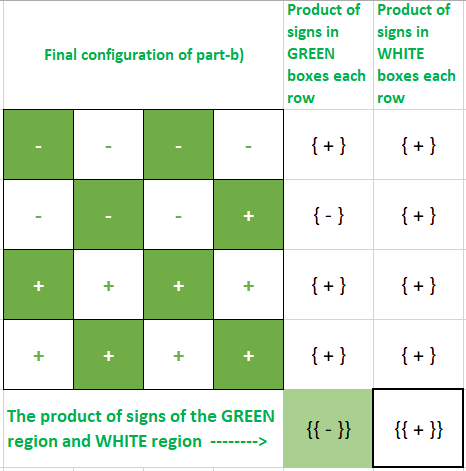 This problem and solution are based on ‘principle of invariance‘.

When things are seemingly changing continuously, look for what core values (though hidden) are not changing.