What is a Photon?

A photon is the smallest discrete amount of electromagnetic energy, also known as a quantum. It’s the fundamental unit of all light.

Photons are continually in motion and travel at a constant speed of 2.998 x 108 m/s to all observers in a vacuum. The speed of light, indicated by the letter c. Every photon has a specific quantity of energy and momentum. The photon’s energy is provided by,

The momentum of a photon is given by,

Photons have the following basic properties:

When a metal is exposed to light, the photoelectric effect occurs, in which the metal emits electrons from its valence shell.  The emitted electron is known as photoelectron, and this phenomenon is commonly known as photoemission.

Wilhelm Ludwig Franz Hallwachs was the first to notice the photoelectric effect, which Heinrich Rudolf Hertz later confirmed. This phenomenon, as well as the quantum nature of light, were explained by Einstein. In 1921, Einstein was awarded the Nobel Prize for Physics for his work on the Photoelectric Effect.

Threshold Energy for the Photoelectric Effect

If γ = frequency of incident photon and γth= threshold frequency, then,

For λ = wavelength of the incident photon, then

If E = energy of an incident photon, then

The photon’s energy is equal to the sum of the metal’s threshold energy and the photoelectron’s kinetic energy. 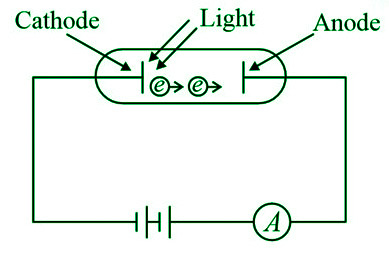 Thus, the equation of photoelectric wave is given by,

Work function is determined by the metal in question, and it will change if the metal is changed. The work function is sometimes defined in terms of threshold frequency, which is the frequency of light for which the emitted Photoelectron’s maximal kinetic energy is zero.

The maximum kinetic energy remains constant as the light intensity increases, but the value of photocurrent increases. 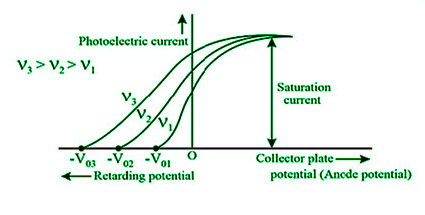 The photoelectric effect depends on :

Question 1: What is the mass of a photon?

The photon’s rest mass is zero, which indicates that if the photon is moving, it will have some momentum, which is equivalent to mass, but at rest, the photon’s mass will be zero.

Question 2: What is threshold frequency?

Question 3: Light of wavelength 4000Å is incident on a metal plate whose work function is 2eV. What is the maximum kinetic energy of emitted photoelectron?

The wavelength of light is λ=4000Å and work function, φ0=2eV

From the Einstein Photoelectric equation, the maximum kinetic energy of photoelectron is given by,

where ‘h′ is Planck’s constant and ‘c′ is the speed of light in a vacuum.

Question 4: The value of retarding potential needed to stop the photoelectrons ejected from a metal surface of work function 1.2eV with the light of energy 2eV is

Work function of the metalφ=1.2eV and energy of the photons is hν=2eV.

The maximal kinetic energy of photoelectrons is given by the Einstein photoelectric equation:

h is the Planck’s constant.

φ is the work function of the metal.

Thus, the retarding potential is 0.8V

Question 5: What is stopping potential?

When the lighted metal is retained at the cathode, the stopping potential is the lowest potential at which no photoelectrons reach the anode.

Question 6: What is work function?