Introduction to Dash in Python

Dash is a Python framework for building analytical web applications. Dash helps in building responsive web dashboards that is good to look at and is very fast without the need to understand complex front-end frameworks or languages such as HTML, CSS, JavaScript. Let’s build our first web dashboard using Dash.

Install the latest version of Dash

In this section, we will make an app that shows a static(but responsive) graph on the web page using the dash.

Step 2: Designing a layout
HTML components are just like HTML. Here html.H1 refers to the h1 tag in HTML.
Then, we make a graph which has various parameters such as id(a unique ID to a particular graph), figure(the graph itself), layout(the basic layout, title of graph, X axis, Y axis data etc., ).

Step 3: Running the server
The dashboard is now ready, but it needs a server to run on. Thus we set up the server using the below code.

Open the app on the web browser in localhost and default port 8050.

Screenshot of the Basic Dash app.

The above teaches us a basic static app. But what if you want to let the user take the control. This is why we are going to use app callbacks provided in Dash. In this section, we are going to make a web app that takes in number from the user and return the square of the number

We are going to design a simple textbox that will help out take input and a text label which will output the square of the number that is input or returns an error if the input is not a number.

A callback is like a trigger that does a certain function on the change of the state of the input. In this case, it executes the method update_value and takes in input_data as the parameter and returns the square of that number. If the input is not a number, then it returns an error statement.

Step 3: Running the server
Again, just like above, we are going to run the server.

Open the app on the web browser in local host and default port 8050. 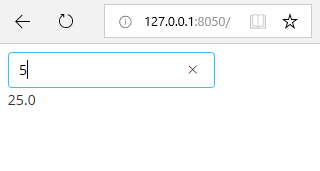