A universal gate is such a gate that we can implement any Boolean function, no matter how complex, using a circuit that consists of only that particular universal gate. The NAND & NOR gates are the most commonly encountered universal gates in digital logic.

Given a circuit, our task is to implement a circuit that is equivalent to the given circuit and consists of only NAND gates. 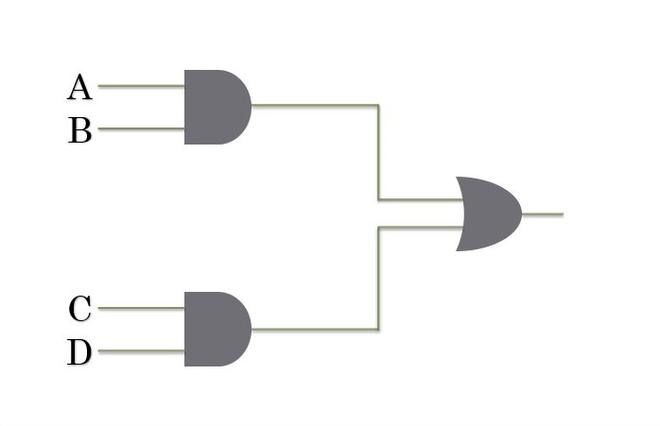 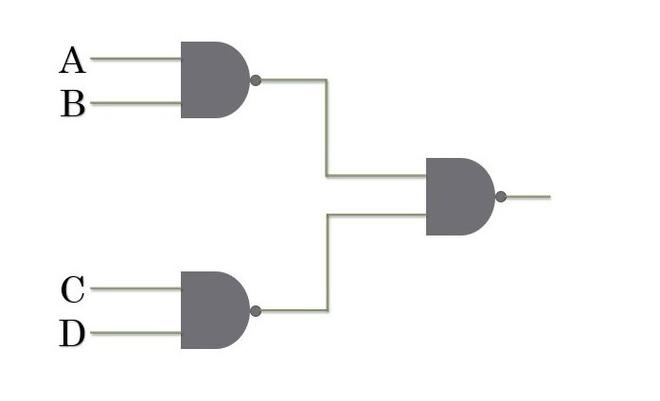 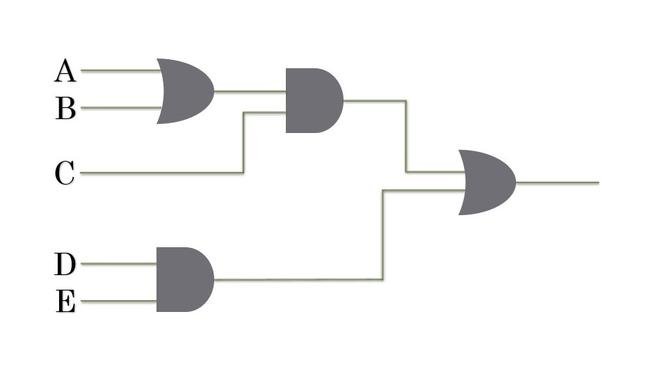 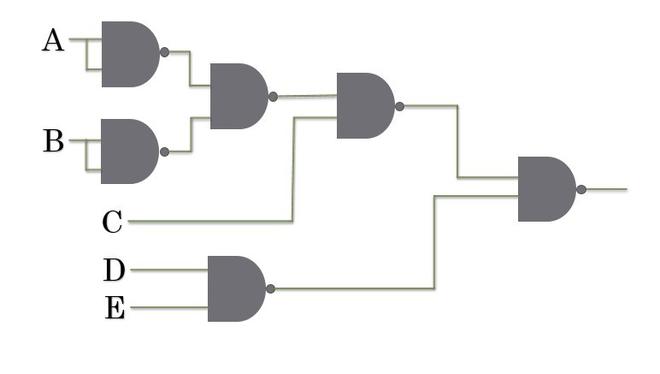 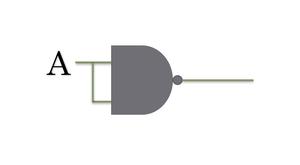 This is quite straightforward, we wish to obtain AB but the NAND gate gives an output (AB)’ so we complement the output of the NAND gate using another NAND gate to obtain ((AB)’)’ which is AB. 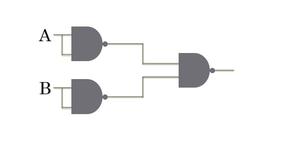 We first compliment the inputs A and B. Then we perform the NAND operation on these complemented inputs. We get (A’B’)’. 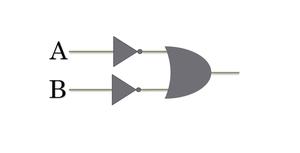 To implement NAND operation using OR gate, we first complement the inputs and then perform OR on the complemented inputs. 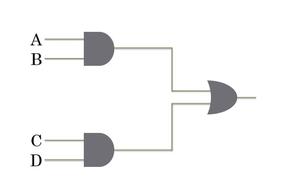 We have to somehow re-implement this circuit using only NAND gates.

Suppose what happens if we insert two inverters between each AND gate and OR gate. 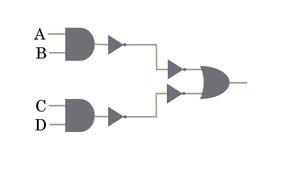 This circuit is completely equivalent to the original one as the output of each AND gate is being complemented twice before the signal reaches the OR gate. These inverters will play a key role in the process of conversion.

Now take a look at the highlighted areas. 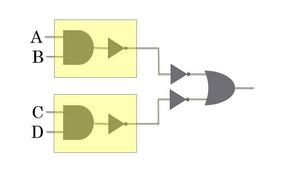 The gates in each highlighted area can be easily combined into one NAND gate since it is basically just an AND gate followed by an inverter. 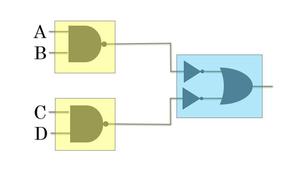 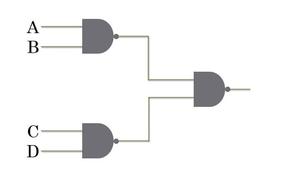 You can verify for yourself that this circuit implements the function AB + CD, same as that of the original circuit. 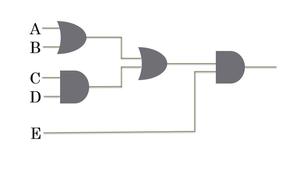 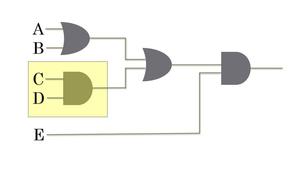 First, we start by replacing the first AND gate(highlighted yellow) with a NAND gate. To do this we insert two inverters after this AND gate. 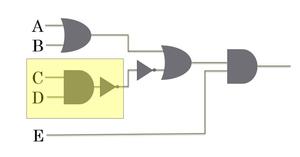 Remember that this circuit is the same as two complement operations resulting in the original signal. The AND gate and the inverter that follows it can be combined into a single NAND gate(see yellow highlighted area). 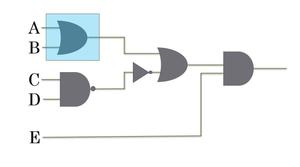 Next, we replace the OR gate in the blue highlighted area with NAND gates. We have seen how to implement OR operation using NAND gates, we put that knowledge to use now. 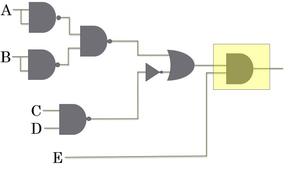 We then proceed to replace the last AND gate(highlighted yellow) with NAND gates. Just like we replaced the OR gate in the previous step, we replace the AND gate with its equivalent NAND gate circuit. 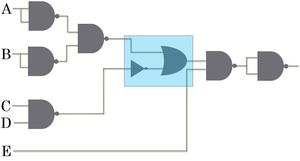 We now are left with an OR Gate and an Inverter Gate. A NAND gate can be implemented by an OR gate with complemented inputs. Here we have only one complemented input to the OR gate. To meet the condition that both the inputs are complemented, we insert two inverters between the highlighted OR gate and the preceding NAND gate. 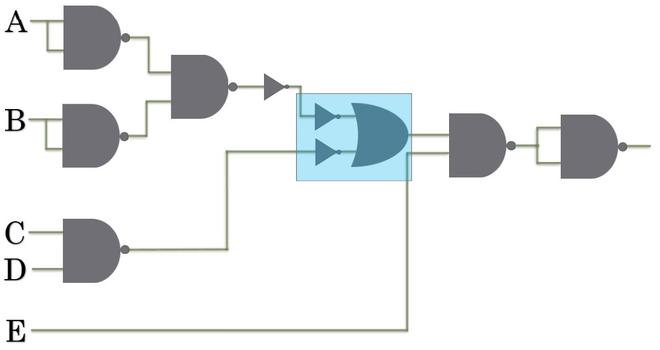 Now both the inputs to the OR gate are complemented. The gates in the blue area represent a NAND operation so we can replace them with a NAND gate. 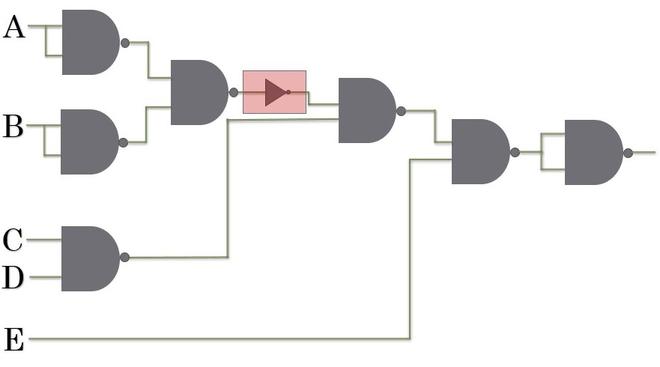 We are now only left with an Inverter. An Inverter gate is basically a one-input NAND gate. We make the necessary replacement and obtain our final circuit. 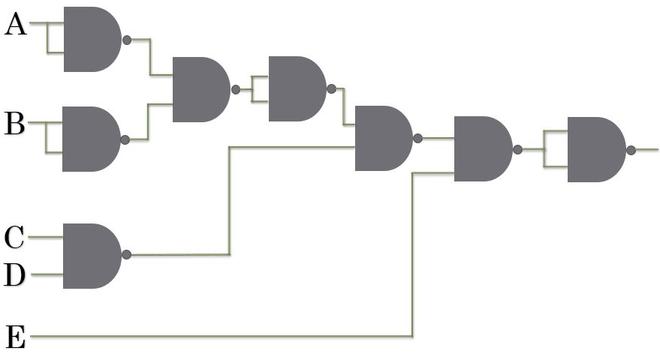 You can verify that this circuit implements :  (A+B + CD)E

We first manipulate this boolean equation so that it is in the Sum of Products(SOP).

In this case, we simply multiply each term in the parenthesis by E.

Since this boolean equation is now in SOP form, the circuit for this equation will be in a standard two-level implementation, meaning there will be a series of AND gates followed by a single OR gate.

We draw the circuit: 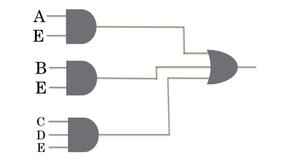 Just like in example 1, we insert two inverter gates between each AND gate and OR gate. 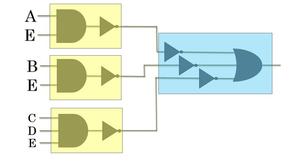 You can probably now figure out what we will do next. We combine the gates in the Yellow areas into one single NAND gate. Also, we know that an OR gate with complemented inputs implements a NAND operation. So we replace the gates in the blue area with a NAND gate. 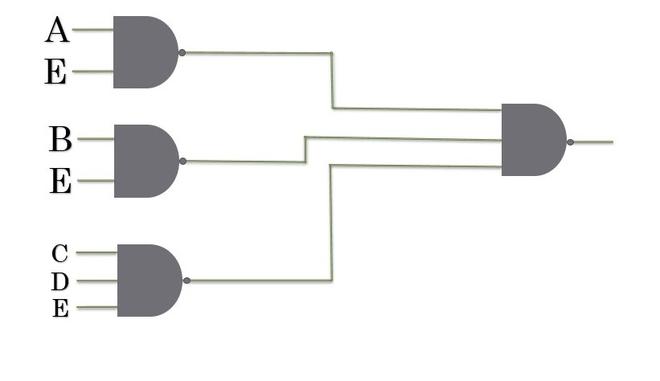 We can conclude that whenever a circuit has a series of AND gates at the first level followed by a single OR gate, we can blindly replace each gate with a NAND gate and the circuit will still implement the same boolean function.

In this case Method 2, took a lot less effort than Method 1, one might wonder why even bother learning Method 1 when Method 2 seems easier? The answer is that Method 2 requires that the boolean equation must be represented in Sum of Products form. In this case, it was easy to convert our equation into SOP from, but this is not always the case.

Suppose you have a circuit that implements the boolean function : (A+B)(C+D)(E+F)(G+H)

Converting this to SOP form will be complicated, and better with Method 1 in this case.