Edges are significant local changes of intensity in a digital image. An edge can be defined as a set of connected pixels that forms a boundary between two disjoint regions. There are three types of edges:

Edge Detection is a method of segmenting an image into regions of discontinuity. It is a widely used technique in digital image processing like

Edge detection allows users to observe the features of an image for a significant change in the gray level. This texture indicating the end of one region in the image and the beginning of another. It reduces the amount of data in an image and preserves the structural properties of an image. 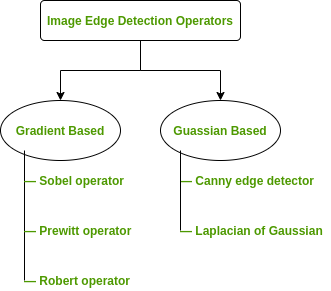 Sobel Operator: It is a discrete differentiation operator. It computes the gradient approximation of image intensity function for image edge detection. At the pixels of an image, the Sobel operator produces either the normal to a vector or the corresponding gradient vector. It uses two 3 x 3 kernels or masks which are convolved with the input image to calculate the vertical and horizontal derivative approximations respectively –

Prewitt Operator: This operator is almost similar to the sobel operator. It also detects vertical and horizontal edges of an image. It is one of the best ways to detect the orientation and magnitude of an image. It uses the kernels or masks –

Robert Operator: This gradient-based operator computes the sum of squares of the differences between diagonally adjacent pixels in an image through discrete differentiation. Then the gradient approximation is made. It uses the following 2 x 2 kernels or masks –

Marr-Hildreth Operator or Laplacian of Gaussian (LoG): It is a gaussian-based operator which uses the Laplacian to take the second derivative of an image. This really works well when the transition of the grey level seems to be abrupt. It works on the zero-crossing method i.e when the second-order derivative crosses zero, then that particular location corresponds to a maximum level. It is called an edge location. Here the Gaussian operator reduces the noise and the Laplacian operator detects the sharp edges.
The Gaussian function is defined by the formula:

is the standard deviation.
And the LoG operator is computed from

Canny Operator: It is a gaussian-based operator in detecting edges. This operator is not susceptible to noise. It extracts image features without affecting or altering the feature. Canny edge detector have advanced algorithm derived from the previous work of Laplacian of Gaussian operator. It is widely used an optimal edge detection technique. It detects edges based on three criteria: