Given a number N and an infinite 2D matrix, which is to be filled using the algorithm given below, the task is to find the coordinates of the given element present in the matrix. The algorithm is as follows: 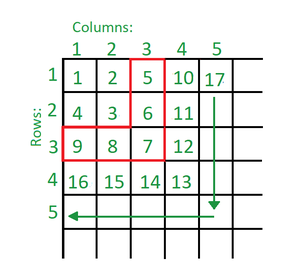 Approach: Following observations can be made:

Complete Interview Preparation
View Details
System Design-Live Classes for Working Professionals
View Details
Data Structures & Algorithms- Self Paced Course
View Details
Most popular in Matrix
Most visited in Pattern Searching
We use cookies to ensure you have the best browsing experience on our website. By using our site, you acknowledge that you have read and understood our Cookie Policy & Privacy Policy