Given a matrix grid[][] of size M * N where each cell of the matrix denotes the cost to be present on that cell. The task is to maximize the cost of moving to the bottom-most row from top-left and top-right corner of the matrix where in each step: 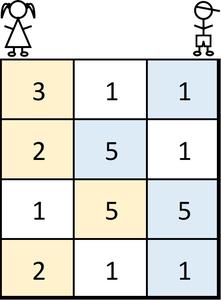 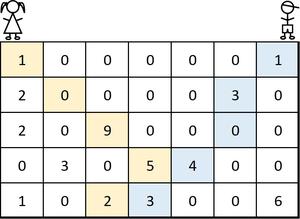 Can point1 be moved firstly to the bottom row, and then point2?

Approach 1 – Dynamic Programming (Bottom Up): The problem solution is based on dynamic programming concept and uses the above intuition.

Approach 2 – Dynamic Programming (Top Down): This solution is also based on the dynamic programming approach which uses the intuition mentioned above. The only difference is that here it uses the top-down approach.

Note: State compression can be used to save the first dimension: dp[col1][col2]. Just reuse the dp array after iterating one row.

Solve Problems
My Personal Notes arrow_drop_up
Previous
Make given Array as Mountain array by removing minimum number of elements
Next
Minimum operations to set given coordinates as 1 by choosing a set bit index and changing whole row to 1
Recommended Articles
Page :
Minimize cost to reach bottom right from top left corner of Matrix with given separate cost for each move
11, Jan 22
Minimize cost to reach bottom-right corner of a Matrix using given operations
17, Feb 21
Minimum cost to reach from the top-left to the bottom-right corner of a matrix
06, Jan 20
Minimize cost to travel from source to destination in a Matrix based on given row change and column change cost
27, Dec 21
Check if a path exists for a cell valued 1 to reach the bottom right corner of a Matrix before any cell valued 2
07, Sep 20
Find row and column pair in given Matrix with equal row and column sum
17, Aug 22
Minimum cells traversed to reach corner where every cell represents jumps
01, Sep 17
Sum of cost of all paths to reach a given cell in a Matrix
28, May 20
Generate a Matrix such that given Matrix elements are equal to Bitwise OR of all corresponding row and column elements of generated Matrix
15, Jan 21
Minimize cost to reach a cell in Matrix using horizontal, vertical and diagonal moves
11, Jan 22
Replace diagonal elements in each row of given Matrix by Kth smallest element of that row
05, Jan 22
Maximize 1s after Flipping exactly one row and one column in given Binary Matrix
02, Mar 22
Check if a given matrix can be converted to another given matrix by row and column exchanges
30, Apr 20
Minimum cost to complete given tasks if cost of 1, 7 and 30 days are given
09, Jul 21
Check if any row of the matrix can be converted to the elements present in the target row
19, Oct 21
Find the number of corner rectangles that can be formed from given Matrix
30, Sep 21
Minimize cost of choosing and skipping array elements to reach end of the given array
25, Oct 20
Print the corner elements and their sum in a 2-D matrix
20, Aug 18
Remove any corner X rows and columns from a matrix
21, Jan 19
Maximize sum of K elements selected from a Matrix such that each selected element must be preceded by selected row elements
02, Dec 20
Check if matrix A can be converted to B by changing parity of corner elements of any submatrix
12, Apr 19
Shortest path in a Matrix from top-left to bottom right-corner with neighbors exceeding at most K
24, Nov 21
Minimize count of adjacent row swaps to convert given Matrix to a Lower Triangular Matrix
06, Oct 20
Minimize cost to empty given array where cost of removing an element is its absolute difference with Time instant
08, Dec 20
Article Contributed By :