Question 1. In two right triangles, one side an acute angle of one are equal to the corresponding side and angle of the other. Prove that the triangles are congruent.

We have two right triangles ABC and DEF in which one side and acute angle of one are equal to the corresponding side and angles of the other, i.e., 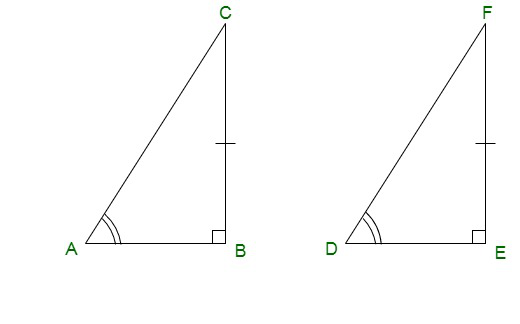 From Δ ABC and Δ DEF

Question 2. If the bisector of the exterior vertical angle of a triangle be parallel to the base. Show that the triangle is isosceles.

In ABC be a triangle

Given that AD is bisector of∠EAC and AD || BC. 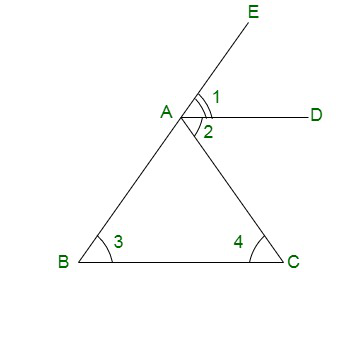 From the above figure,

So the sides AB and AC are equal so

Δ ABC is an isosceles triangle.

Question 3. In an isosceles triangle, if the vertex angle is twice the sum of the base angles, calculate the angles of the triangle.

Now put the value of ∠A and ∠C, we get

Question 4. PQR is a triangle in which PQ = PR and is any point on the side PQ. Through S, a line is drawn parallel to QR and intersecting PR at T. Prove that PS = PT.

In ΔPQR is a triangle

It is given that PQ = PR, and S, a line is drawn parallel to QR and intersecting PR at T 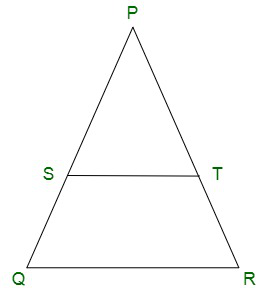 As we know that PQ = PR, so the given △PQR is an isosceles triangle.

Question 5. In an △ABC, it is given that AB = AC and the bisectors of B and C intersect at O. If M is a point on BO produced, prove that ∠MOC = ∠ABC.

It is given that AB = AC and the bisector of ∠B and ∠C intersect at O. 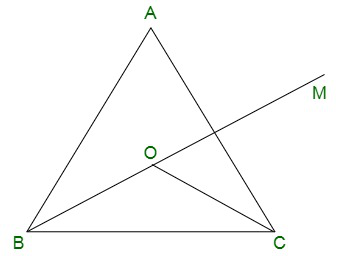 It is given that AB = AC

So the △ABC is an isosceles triangle

Question 6. P is a point on the bisector of an angle ABC. If the line through P parallel to AB meets BC at Q, prove that triangle BPQ is isosceles.

Given that P is a point on the bisector of ∠ABC, and PQ || AB. 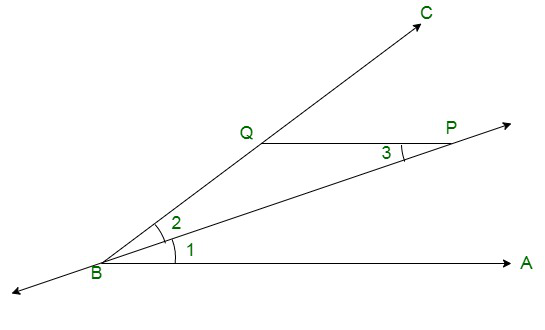 Prove: △BPQ is an isosceles triangle

It is given that BP is bisector of ∠ABC

Also given that PQ || AB

Question 7. Prove that each angle of an equilateral triangle is 60°.

Prove: Each angle of an equilateral triangle is 60°.

Let us considered we have an equilateral triangle △ABC

∠B = ∠A ………(ii) [Because opposite angles to equal sides are equal] 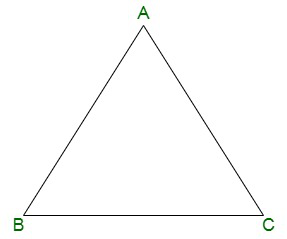 Question 8. Angles ∠A, ∠B, ∠C of a triangle ABC are equal to each other. Prove that ABC is equilateral.

Hence, proved that △ABC is equilateral. 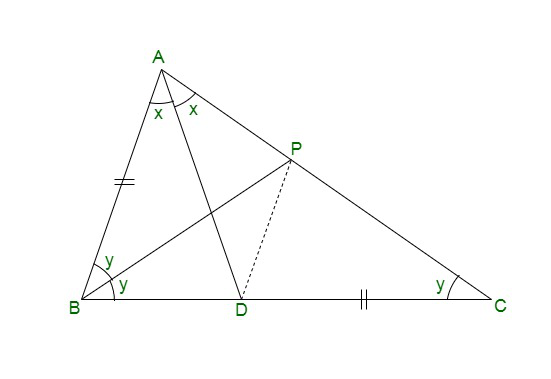 Now, draw a line BP which is bisector of ∠ABC, and join PD.

So, by SAS congruence criterion,

Given that in ABC is a right-angled triangle