A relation is in BCNF if, X is superkey for every functional dependency (FD) X?Y in given relation. 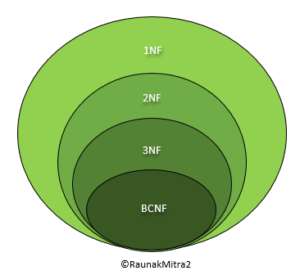 You came across a similar hierarchy known as Chomsky Normal Form in Theory of Computation. Now, carefully study the hierarchy above. It can be inferred that every relation in BCNF is also in 3NF. To put it another way, a relation in 3NF need not to be in BCNF. Ponder over this statement for a while.

To determine the highest normal form of a given relation R with functional dependencies, the first step is to check whether the BCNF condition holds. If R is found to be in BCNF, it can be safely deduced that the relation is also in 3NF, 2NF and 1NF as the hierarchy shows. The 1NF has the least restrictive constraint – it only requires a relation R to have atomic values in each tuple. The 2NF has a slightly more restrictive constraint.

Read this for a clear understanding of 2NF
The 3NF has more restrictive constraint than the first two normal forms but is less restrictive than the BCNF. In this manner, the restriction increases as we traverse down the hierarchy.