Do you remember the first code you’ve written (probably, Hello World program) and how many errors you made in that basic program? Maybe a lot – whether it be syntax errors, runtime errors, or any other (No worries, it’s the sign of great coders!). Indeed a bug in the source code is a nightmare for any programmer but it is also true that without these bugs & error, the journey of a programmer is incomplete. Even programmers love to debug the code as it not only makes them proficient with that program but they also get to learn and explore new things as well. And keeping this in mind, various companies offer the Bug Bounty Programs that challenge you to find the bugs in their systems. And yes, it can earn you some money as well! 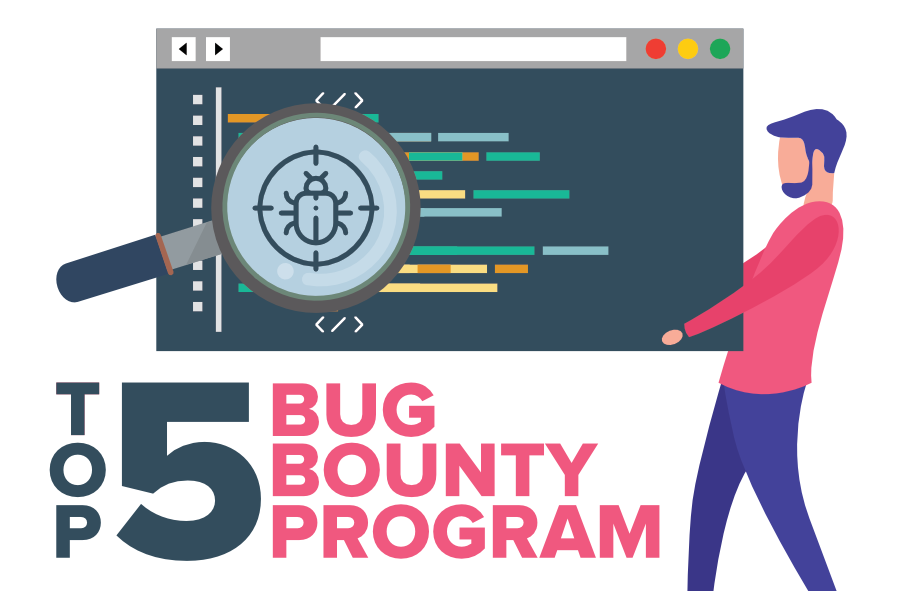 Now, you must be curious to know about these Bug Bounty Programs. A Bug Bounty Program is a kind of open deal between the companies and the developers (especially white hat hackers) to find certain bugs, security exploits, and other vulnerabilities in the organization’s system or product. In case, if an individual can find these bugs in their system, he is expected to report it to the company on behalf of which the company rewards the person with appreciation and a certain amount dedicated to the particular bugs. So basically it is a win-win situation for both – the company and the hacker. Apart from the monetary benefits, there are several other benefits too to take part in Bug Bounty Programs, some of these are mentioned below:

For the last few years, Bug Bounty Programs have seen a rapid popularity growth rate and nowadays, almost every leading company such as Google, Facebook, Microsoft, etc. are offering these programs. As it is not only rewarding the skills of the white hat hackers but it is also making the company’s system more secure and bug-free. Here in this article, let’s take a look at such best 5 Bug Bounty Programs in detail.

Alike in other fields, Google is one of the most popular companies when it comes to Bug Bounty Program. And with the same concern, it offers a Google Vulnerability Reward Program (VRP) for all the white hat hackers. Google offers this program for its content belongs to any of these domains – .google.com, .youtube.com and .blogger.com. Also, the bugs in Google Cloud Platform and its developed applications or extensions also fall under this program. The program majorly covers the design and implementation issues such as server-side code execution bugs, cross-site scripting, etc. that work against the security of user data.

The reward money for qualifying the bugs issue range from $100 – $31,337 based on the impact of the reported issue. However, to win the rewarded amount, you need to identify a valid bug or vulnerability as per the company’s guidelines such as reported issues related to URL redirection, user enumeration, legitimate content proxying and framing. etc, do not earn you a monetary reward (or even, may not qualify).

Facebook is also one of the top IT giants that welcome & reward the hackers or developers who believe that they can suspect any vulnerability or bug in the company’s system. Facebook offers this bug bounty program for the following products – Facebook, FBLite, Instagram, WhatsApp, Open-Source Projects and other acquired products. However, the third-party apps or sites that are not owned by Facebook, do not fall under this program. Although the vulnerability in the third-party systems that are integrated with Facebook and has a potential impact on Facebook user data or systems can be considered applicable for the program.

The reward money for the Facebook Bug Bounty Program starts from $500 and the amount increases based on the impact and risk of exploitation due to the reported bug. Moreover, you have to remember that the detected bug must not be out of scope such as Denial-of-service attacks, spamming or social engineering techniques, etc. and against the program’s guidelines.

Microsoft offers the bounties based on the product and the issue reported. Each product has its own range of rewarded money such as there is a top reward of up to $300,000 on the vulnerability reported on Microsoft Azure cloud services, up to $30, 000 on issues reported in Windows Insider Preview, and various others. Also, you need to report a vulnerability along with its functioning exploit, failing of which you’ll be rewarded with a partial bounty.

Initially, Apple’s bug bounty program was introduced only for 24 security researchers but after the expansion of the framework, the need for additional bug detectors increased. The company’s bug bounty program concerned with the detection of vulnerabilities in the latest publicly available versions of iOS, iPad OS, tvOS, macOS or watchOS with a standard outline. Apart from the published bounty categories by the company, if you find any other vulnerability having consequential impact then it will fall under the bounty program.

The reward money for the Apple bug bounty program depends upon the vulnerability level of the reported issue. However, a maximum amount is fixed for almost every issue such as $100,000 for unauthorized access to iCloud account data on Apple Servers, $250,000 for user data extraction, $100,000 for lock screen bypassing, and various others. Also, if you report the issues that are unknown to the company yet can earn you a 50% additional bounty.

Intel Corporation firmly believes that security is the primary aspect to look out for any organization and with the same reason it offers a Bug Bounty Program to encourage the researchers to detect any bugs or vulnerabilities in their products or system. Intel Bug Bounty Program majorly concerns with the company’s hardware (Microprocessors, Field Programmable Gate Array components, etc.), firmware (UEFI BIOS, Intel Compute Stick, NUC, etc.) and software segments (Device drivers, Development tools, etc.). However, if the reported issues or vulnerabilities belongs to the product versions that are no longer under active support or already known to Intel or any similar cases, it will be considered as ineligible for the program.

The reward money for the Intel Bug Bounty Program ranges from $500-$100,000 based on the nature and risk level of the reported issue. Intel manages the payment process for the Bug Bounty Program through the HackerOne platform. Apart from the financial reward, the organization also publicly recognizes the researcher at the time of the public revelation of the reported issue.

Now, as you see that almost every organization is challenging you to find at least a single bug in their system then what are you waiting for? Just gather your arsenal of tools, dive into the battle and showcase all you’re learning & skills!!