Multiprogrammed, batched systems provided an environment where various system resources were used effectively, but it did not provide for user interaction with computer systems. Time sharing is a logical extension of multiprogramming. The CPU performs many tasks by switches are so frequent that the user can interact with each program while it is running.

A time shared operating system allows multiple users to share computers simultaneously. Each action or order at a time the shared system becomes smaller, so only a little CPU time is required for each user. As the system rapidly switches from one user to another, each user is given the impression that the entire computer system is dedicated to its use, although it is being shared among multiple users.

A time shared operating system uses CPU scheduling and multi-programming to provide each with a small portion of a shared computer at once. Each user has at least one separate program in memory. A program loaded into memory and executes, it performs a short period of time either before completion or to complete I/O.This short period of time during which user gets attention of CPU is known as time slice, time slot or quantum.It is typically of the order of 10 to 100 milliseconds. Time shared operating systems are more complex than multiprogrammed operating systems. In both, multiple jobs must be kept in memory simultaneously, so the system must have memory management and security. To achieve a good response time, jobs may have to swap in and out of disk from main memory which now serves as a backing store for main memory. A common method to achieve this goal is virtual memory, a technique that allows the execution of a job that may not be completely in memory. 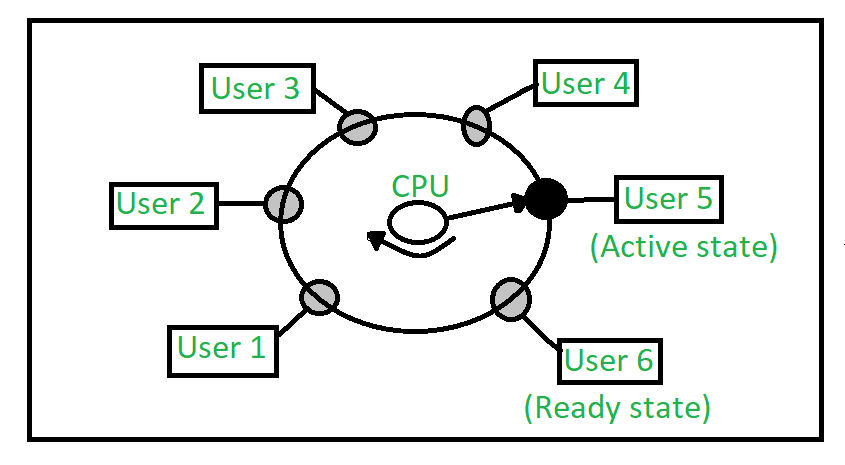 In above figure the user 5 is active state but user 1, user 2, user 3, and user 4 are in waiting state whereas user 6 is in ready state.

Requirements of Time Sharing Operating System :
An alarm clock mechanism to send an interrupt signal to the CPU after every time slice. Memory Protection mechanism to prevent one job’s instructions and data from interfering with other jobs.