TensorFlow the massively popular open-source platform to develop and integrate large scale AI and Deep Learning Models has recently been updated to its newer form TensorFlow 2.0. This brings a massive boost in features in the originally feature-rich ML ecosystem created by the TensorFlow community.
What is Open-Source and how is it made TensorFlow so successful?
Open-Source means the something that the people(mainly developers) can modify, share, integrate because all the original design features are open to all. This makes it very easy for a particular software, product to expand easily, effectively and in a very little time. This feature allowed the original creator of TensorFlow i.e Google to easily port this into every platform available in the market that includes Web, Mobile, Internet of Things, Embedded Systems, Edge Computing and included support of various other languages such JavaScript, Node.js, F#, C++, C#, React.js, Go, Julia, Rust, Android, Swift, Kotlin and many other.
Along with this came the support for hardware acceleration for running large scale Machine Learning codes. These include CUDA(library for running ML code on GPUs), TPUs(Tensor Processing Unit- Custom hardware provided by Google specially designed and developed to process tensors using TensorFlow) for multiple machine configuration, GPU, GPGPU, Cloud-based TPU’s, ASIC (Application Specific Integrated Circuits) FPGAs(Field-Programmable Gate Arrays- These are exclusively used for custom Programmable Hardware). This also includes new additions such as NVIDIA’s Jetson TX2 and Intel’s Movidius chips.
Now coming back to the newer and much feature rich TensorFlow2.0:
This is a graphical implementation of the changes: 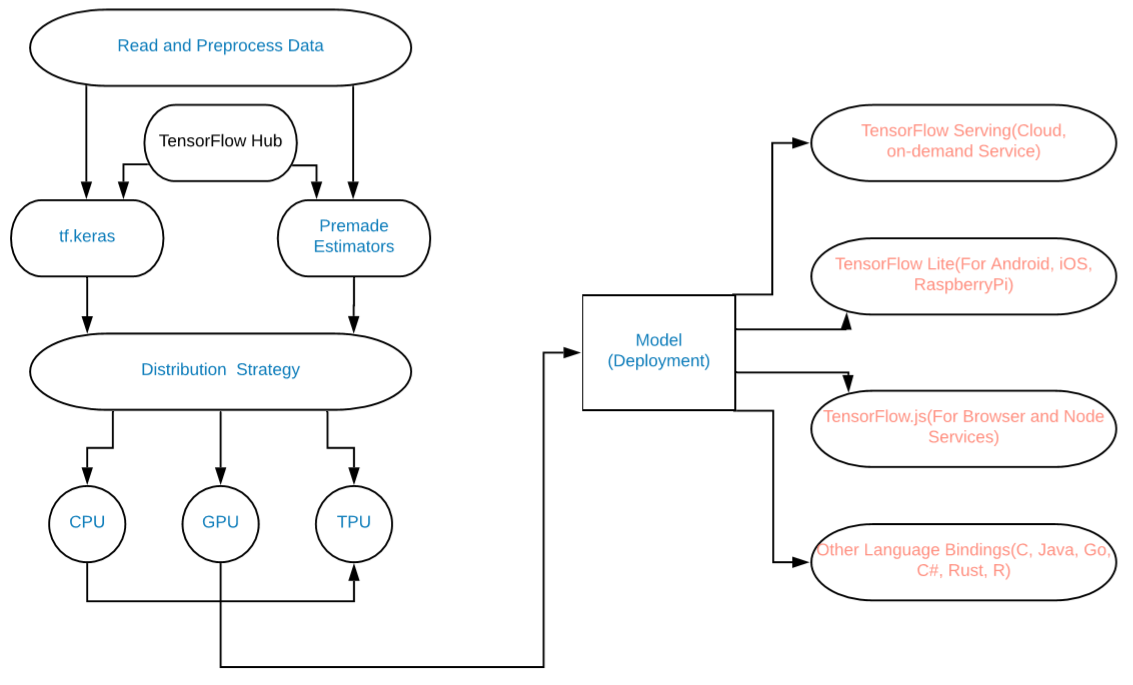 The things which are added include:

At last we can now build big ML and Deep Learning models easily, effectively on TensorFlow2.0 for end users and implement them on a large scale.

Most popular articles
Most visited in Articles
✍
Write a Testimonial