Thrashing is a condition or a situation when the system is spending a major portion of its time servicing the page faults, but the actual processing done is very negligible.

We may also argue that as soon as the memory is full, the procedure begins to take a long time to swap in the required pages. Because most of the processes are waiting for pages, the CPU utilization drops again.

As a result, a high level of multi programming and a lack of frames are two of the most common reasons for thrashing in the operating system. 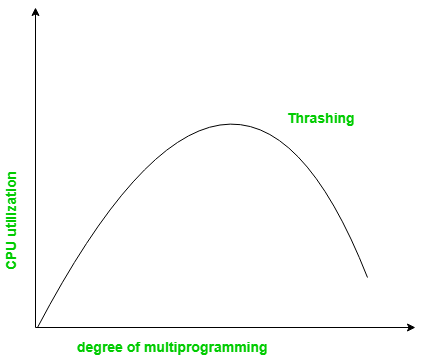 The basic concept involved is that if a process is allocated too few frames, then there will be too many and too frequent page faults. As a result, no useful work would be done by the CPU and the CPU utilization would fall drastically. The long-term scheduler would then try to improve the CPU utilization by loading some more processes into the memory thereby increasing the degree of multi programming. This would result in a further decrease in the CPU utilization triggering a chained reaction of higher page faults followed by an increase in the degree of multi programming, called Thrashing.

Locality Model –
A locality is a set of pages that are actively used together. The locality model states that as a process executes, it moves from one locality to another. A program is generally composed of several different localities which may overlap.

For example, when a function is called, it defines a new locality where memory references are made to the instructions of the function call, it’s local and global variables, etc. Similarly, when the function is exited, the process leaves this locality.

This model is based on the above-stated concept of the Locality Model.
The basic principle states that if we allocate enough frames to a process to accommodate its current locality, it will only fault whenever it moves to some new locality. But if the allocated frames are lesser than the size of the current locality, the process is bound to thrash.

According to this model, based on parameter A, the working set is defined as the set of pages in the most recent ‘A’ page references. Hence, all the actively used pages would always end up being a part of the working set.

The accuracy of the working set is dependent on the value of parameter A. If A is too large, then working sets may overlap. On the other hand, for smaller values of A, the locality might not be covered entirely.

If D is the total demand for frames and

is the working set size for process i,

Now, if ‘m’ is the number of frames available in the memory, there are 2 possibilities:

A more direct approach to handling thrashing is the one that uses the Page-Fault Frequency concept. 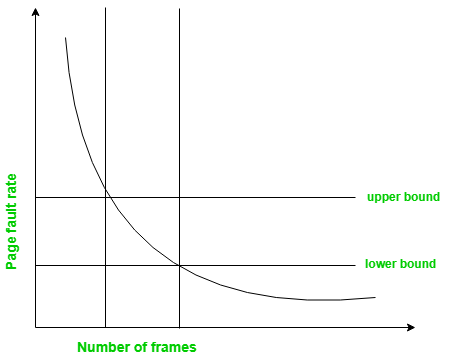