Evaporation is the process of the separation of a solid substance that is dissolved in water. The application is based on the fact that solids do not vaporize easily, whereas liquids do. On performing evaporation, the solid substance is left behind as a residue. It is a vaporization technique where the liquid changes into the gaseous phase and residues on the surface.

Evaporation continues until the state of equilibrium is attained. However, in an enclosed space, a liquid will continue to vaporise until air saturation is achieved. In practicality, only a small fraction of the total molecules possess the heat energy that is required to vaporise.

The rate of evaporation becomes equivalent to the rate of condensation. As soon as the process of escape of the water molecules become equivalent to the return, the escaping vapour is said to be saturated. The system attains a level where the equilibrium state is directly related to the vapour pressure of the substance At this point, the following factors remain constant:

The Clausius–Clapeyron relation conveniently elaborates this relation which lays emphasis on the fact that the rate of evaporation of any liquid holds a relation to the vapour pressure maintained in the enclosed system:

Here, P1 is the vapour pressure associated with time T1 and P2 at T2 respectively.

R is the universal gas constant. ΔHvap is referred to as the enthalpy of vaporisation

Advantages of Separation by Evaporation

Disadvantages of separation by evaporation 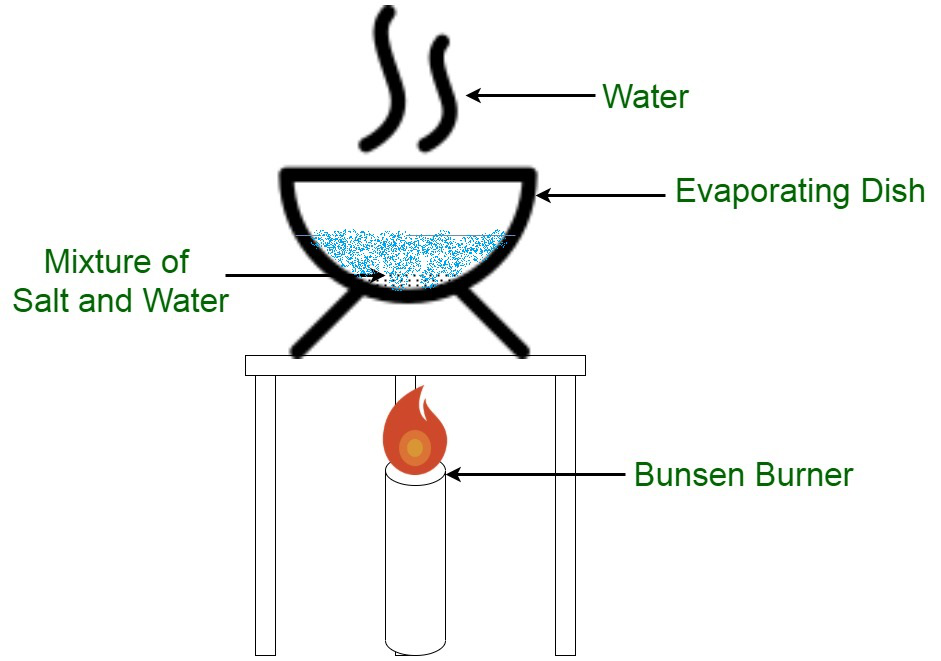 1. A dish is filled with water and few drops of dilute sulphuric acid are added.

2. The water is heated. Upon boiling, the sodium sulphate powder is added while continuous stirring.

3. The powder is added till it stops dissolving further in the mixture.

4. The solution is filtered and left for cooling.

5. The sodium crystals will slowly separate out.

Question 2: Can evaporation be used to separate dye from water?

Question 3: Give a daily life example to validate the separation by evaporation.

Nail polish applied on the hand evaporates due to the presence of the liquid solution, acetone in it.

Question 4: Illustrate one major disadvantage of separation by evaporation.

It incurs high usage of resources such as capital and energy. It also puts an overhead on the maintenance costs. Difficulty may occur in carrying out the procedure due to large size of apparatus and enhanced temperatures. Some of the other problems are corrosion, scaling as well as foaming.

Question 5. How to separate water from milk.

By Measuring the density of milk and separate water by evaporation till the desired density is achieved.

Question 6. Evaporation in the dairy industry is a preliminary step to which of the following process?

Dairy industry evaporation is used for concentration duties such as milk, skim milk and whey. It is also used as a preliminary step to drying. Milk products intended for milk powder are normally concentrated from an initial solids content of 9 – 13% to a final concentration of 40 – 50% total solids before the product is pumped to the dryer.

Question 7. Which evaporators can be used when a low degree of concentration is required?

Circulation evaporators can be used when a low degree of concentration is required or when small quantities of product are processed. In yogurt production, for example, evaporation is utilized to concentrate milk 1.1 to 1.25 times, or from 13% to 14.5% or 16.25%solids content respectively. This treatment simultaneously de-aerates the product and rids it off-flavors.