Error Boundaries: Error Boundaries basically provide some sort of boundaries or checks on errors, They are React components that are used to handle JavaScript errors in their child component tree.

React components that catch JavaScript errors anywhere in their child component tree, log those errors, and display a fallback UI. It catches errors during rendering, in lifecycle methods, etc.

Reason to Use: Suppose there is an error in JavaScript inside component then it used to corrupt React’s internal state and cause it to emit cryptic errors. Error boundaries help in removing these errors and display a Fallback UI instead(Which means a display of an error that something broke in the code).

Working Principle: Error Boundary works almost similar to catch in JavaScript. Suppose an error is encountered then what happens is as soon as there is a broken JavaScript part in Rendering or Lifecycle Methods, It tries to find the nearest Error Boundaries Tag. 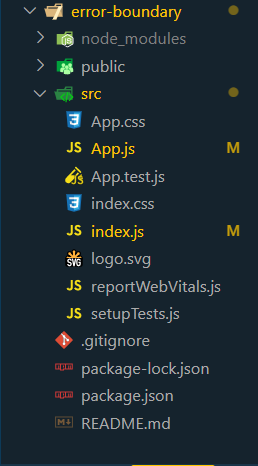 Explanation:The above code is written in such a way that if the counter reaches the value of 3 then Error Boundaries will throw an error.

As shown in the above code that two counters are included in the same Error Boundary Component through which if any one of them causes any sort of error by reaching the value of 3, then instead of rendering any of them a detailed message will be provided on the screen.

On the other end below both counters are included in the individual error Boundaries component through which what happens is only that counter which has caused the error is not rendered, while others are rendered normally.

Error boundaries do not catch errors for the following events:

Try/Catch: One question which might be tickling in your mind is since Error Boundaries works like Catch, Why not just go with try/catch and why should you learn this new Concept. Well, the answer is try/catch is used with imperative code but As we know that React is declarative in nature, and Error Boundaries help in preserving the declarative nature of React.

Uncaught changes: Since it does not catch errors in some particular cases, So what about those errors that left unchecked or Uncaught. As of React 16, errors that were not caught by any error boundary will result in unmounting of the whole React component tree. This means after migrating to React 16 and using Error Boundaries, you will be able to provide a better user experience as now users will be able to see the reason before an unexpected crash, instead of just guessing.

My Personal Notes arrow_drop_up
Previous
jQuery UI Resizable maxWidth Option
Next
React.js without JSX
Recommended Articles
Page :
What are error boundaries in ReactJS (16) ?
08, Sep 21
Different Ways to Fix "Error type 3 Error: Activity class {} does not exist" in Android Studio
24, Feb 21
How to solve too many re-renders error in ReactJS?
15, Feb 21
How to test a URL for 404 error in PHP?
15, May 19
How to remove error Call to undefined function curl_init()?
01, Nov 18
jQuery | error() Method
27, Feb 19
JavaScript Error message Property
17, Mar 19
JavaScript Error name Property
26, Mar 19
How to avoid Compile Error while defining Variables
05, Apr 19
Where does PHP store the error log? (php5, apache, fastcgi, cpanel)
22, Apr 19
How to solve “Submit is not a function” error in JavaScript ?
27, Jun 19
How to Fix “passwd: Authentication token manipulation error” in Linux
17, Jun 21
Why error "$ is not defined" occurred in jQuery ?
05, Nov 19
How to Fix a 401 Unauthorized Error?
19, Nov 19
Error Handling in Perl
11, Nov 19
Golang Program to Show the Duplicate Case Error in Switch Statement
01, May 20
Error Handling in Express
02, Jun 20
Root-Mean-Square Error in R Programming
20, Jul 20
Add perpendicular caps to error bars in Matplotlib
24, Dec 20
Use error bars in a Matplotlib scatter plot
16, Dec 20
How to display an error for invalid input with php/html ?
29, Dec 20
Add error bars to a Matplotlib bar plot
17, Dec 20
Change the error bar thickness in Matplotlib
03, Jan 21
Setting Different error bar colors in bar plot in Matplotlib
02, Jan 21
Article Contributed By :