What are error boundaries in ReactJS (16) ?

Runtime errors during rendering could put out an application in a broken state. React basically unmounts the hole react component tree. What would be great is if we could catch the errors anywhere in their component tree, log those errors, and display a fallback UI. This is where the error boundary takes the spotlight. A class component that implements either one or both of the life cycle methods static getDerivedStateFromError() or componentDidCatch() becomes an error boundary.The static getDerivedStateFromError() is used to render a fallback UI after an error is thrown. The componentDidCatch() is used to log the error information.

Step 2: After creating your project folder i.e. error-boundary-demo, move to it using the following command:

Step 3: Create a directory and name it Component. 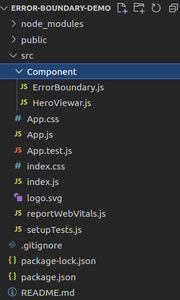 Step 5: In this step, we will import HeroViewar from HeroViewar.js to print some hero’s name. Pass hero’s name as prop to HeroViewar component. Write down the following code in the App.js file. 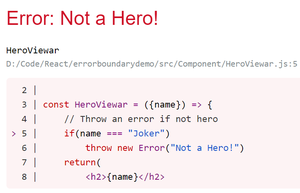 Explanation: One of our hero’s name was ‘Joker’, that’s why HeroViewar throws an error. If you now take a look at the browser you will see the entire application crashes. Obviously, this is not good. What we want is if a particular component throws an error only that component should fall back into a UI and the remaining component should be unaffected.

Step 6: To overcome the above problem React 16 introduce a new concept of an “error boundary”. Error Boundary catch the errors anywhere in their component tree, and display a fallback UI. Let’s add it.  Create ErrorBoundary.js in the Component directory and write down the following code.

Step 7: Update App.js to wrap each and every HeroViewar  with ErrorBoundary like:

Write down the following code to App.js

Previous
COVID-19 Tracker using ReactJS and real time API
Next
Lexicographically smallest permutation number up to K having given array as a subsequence
Related Articles
1. React.js Error Boundaries
2. How to solve too many re-renders error in ReactJS?
3. What is the best way to replace image with default image on error in ReactJS ?
4. How to create a custom error page in Next.js ?
5. React Suite Steps Error Status
6. How to import recharts.js library to ReactJS file ?
7. How to create Shopping Cart Button in ReactJS?
8. ReactJS Onsen UI AlertDialogButton Component
9. ReactJS MDBootstrap Spinner Component
10. Implement Stack Data Structure using ReactJS
Article Contributed By :