Many times we’ve seen students struggling with the dilemma of choosing a worthwhile Programming Language for the sake of placements. Though this situation is somewhat justifiable as among the numerous Programming Language available across the world, picking out the one that can help you to get your DREAM JOB is not an easy job. 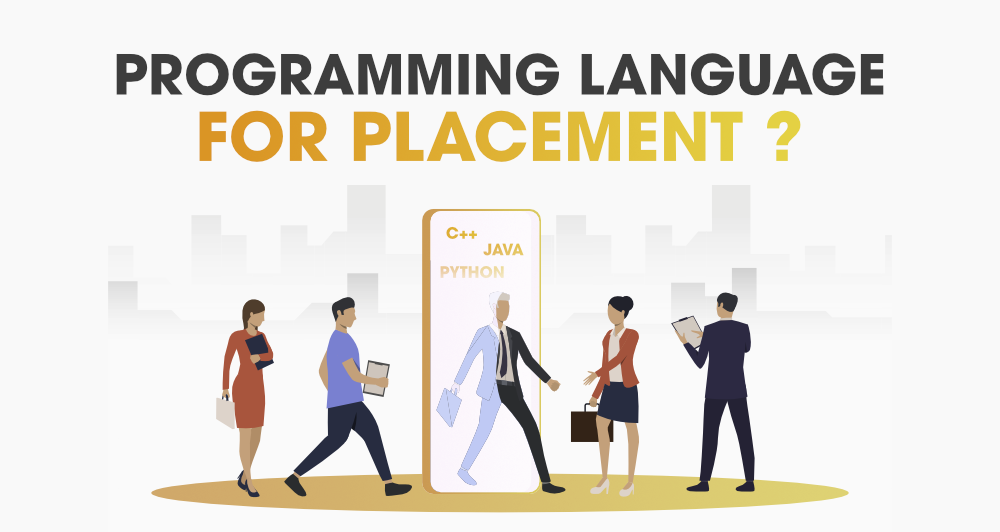 But wait…do you know that it is not that difficult to make a worthwhile choice in such a situation – yes, all you need to do is follow a strategic approach and perform several assessment practices. And with a similar concern, in this article, we’ll discuss those approaches and assessment practices that will help you to make the right choice for placements among these three renowned programming languages – C++, Java, and Python!!

Before moving further, you need to know that having sound knowledge of the particular programming language is reasonably important while going out for the tech interviews as recruiters emphasize assessing your programming knowledge and skills during multiple phases like in coding rounds, technical interview rounds, etc. That means, whichever language you’re working with, you need to get your programming fundamentals clear with it.

Now let’s take a brief look at the details of all these three programming languages:

It is a general-purpose programming language that supports object-oriented programming paradigms. The language acts as a mid-level language as it can be used for both – system programming and large-scale user applications. It can be considered the advanced version of the C Language and the basic syntax of both languages are somewhat similar. Moreover, C++ provides you with rich library support in the form of a Standard Template Library. Indeed, C++ has been among one of the top programming languages for a long time and the language has a wide range of applications such as Operating Systems, Cloud/Distributed Systems, Web Browsers, and many more.

Learn the most in-demand industry programming language – C++ Programming Foundation – Self Paced. This beginner friendly C++ Language course has been designed to help you get started in the world of programming and to help you build a strong foundations for a successful career ahead.

Java is an object-oriented programming language that works on Write Once, Run Anywhere principle which means the compiled JAVA code can execute on each platform that supports JAVA without doing recompilation. The language offers you various remarkable features such as portability, robustness, multithreading, security & platform independency, and many more. Though in the last year’s index report, JAVA has seen a decline in its demand and popularity. But the language is still having much occupancy in the tech world. If we look at the numbers, there are nearly 8-9 million JAVA Developers across the world and the language has wide use in the development of enterprise-scale web applications and Android applications.

Looking to learn JAVA that too in an easy way? Check out GeeksforGeeks Java Programming Foundation – Self Paced course which will teach learners like you the basic concept of JAVA and how to solve coding questions easily and efficiently. Don’t wait and ping the registration button now!

Python is undeniably one of the most favorable languages for young developers, more specifically students. Most probably, the reason behind it is its simple syntax and easy-to-learn nature. It is a high-level, general-purpose programming language that supports multiple programming paradigms like structured, functional, and object-oriented programming. Python comes up with various worthwhile features such as extensive library support, easy integration with other languages, automatic garbage collection support, and many more. The language is being used by nearly every IT giant whether it be Google, Amazon, Facebook, or any other and it is widely used in domains like Web Development, Machine Learning, Web scraping, etc.

GeeksforGeeks Python Programming Foundation -Self Paced course will introduce you to the world of Python. It is a beginner-friendly and self-paced course designed to help start learning Python language from scratch. Here, you’ll get in-depth knowledge of Functions, Loops, Strings, Lists, etc. and learn how to solve coding problems efficiently in Python. Register asap to get the best of this course.

As of now, you must have known about these 3 languages and so you would also be familiar with the fact that each programming language has its own features & use cases. Now, it’d be easier for you to make a choice among these 3 programming languages for the placement concerns based on the below-mentioned parameters.

1. Which Programming Language is Faster?

2. Most Relevant Language for Competitive Programming?

Everyone knows that Competitive Programming plays a pivotal process during the recruitment process as it adds much-needed value to your resume and sharpens your programming skills also. Hence, you need to pick out a programming language that can fulfill all the requirements for competitive programming efficiently. And, C++ is the most recommended programming language for competitive programming primarily because of the availability of a rich library known as Standard Template Library that allows you to deal with various data structures such as lists, graphs, stacks, arrays, trees, and others effectively. Also, as C++ supports Object-Oriented Programming methods, it helps you to solve real-time problems in coding contests.

3. Which Programming Language Can Give You an Edge During Technical Interviews?

This is a bit tricky parameter. During the recruitment process, particularly in the technical interview round, the interviewer often asks you several questions related to programming functionalities. So, you need to be proficient with these programming fundamentals and concepts to do well during placements. For example – you may be asked questions based on pointers, structures & unions, etc. However, like C++, Java & Python do not come up with these low-level programming functionalities and underlying mechanisms. And apart from this low-level programming knowledge, as C++ also provides you with the knowledge of OOPs concepts, it is surely having an upper hand in this particular parameter.

4. What are your End-Goals?

NOTE: This is indeed the most important parameter of all.

WHY… ?? Because every programming language has its own area of expertise and applications. Okay, let us understand it with a scenario – suppose you’re looking forward to making a career in Android Development then the comparison between Java and Kotlin will be more worthwhile. Similarly, if your end goal is to get into Game Development, you can go with C++ without giving it a second thought or if you’re fascinated with having a career in trending technologies like Machine Learning Artificial Intelligence, etc. – you can consider Python for that. In short, once you’ll get clear with your end goal, it will become easier for you to understand which language is the best fit for your requirements.

Also, you need to know that once you’ll command any low-level language like C or C++, it will hardly take you 3-4 weeks to learn other languages like Java, Python, etc. Hence, you’re strongly recommended to learn and master one language first instead of unnecessarily keep switching languages.

So, these are several parameters based on which you can decide on a particular programming language for your placement and career goals. Apart from these above-mentioned parameters, several other parameters that can also be taken into consideration are demand & popularity of the language, job opportunities, etc. Again, you must ensure to identify your requirements and area of interest before opting for any of the programming languages.

In the end, whichever programming language you would choose, you must be confident and efficient with that to get success!!