Which Programming Language Should I Choose as a Beginner?

You have just stepped into college. It has not even been a week and is already hearing people talking about hefty paychecks and grand packages in Google, Microsoft, and other giants. They talk about dream offers of crores. You feel intimidated, which is understood. After all, you have just stepped into college; which means you are still a young youth like all others, wishing to taste success in life. But you are confused. These figures mesmerize you but they scare you at the same time.
Here is a secret! Don’t tell this to anyone. People have indeed got such huge packages, and that’s happy news. Why? you might ask. This is because it means you are equally worthy of getting it too. But nothing comes easy in life. You know this. You must be having an unconquerable urge to surmount all obstacles and willingness to not give up at any point in time. 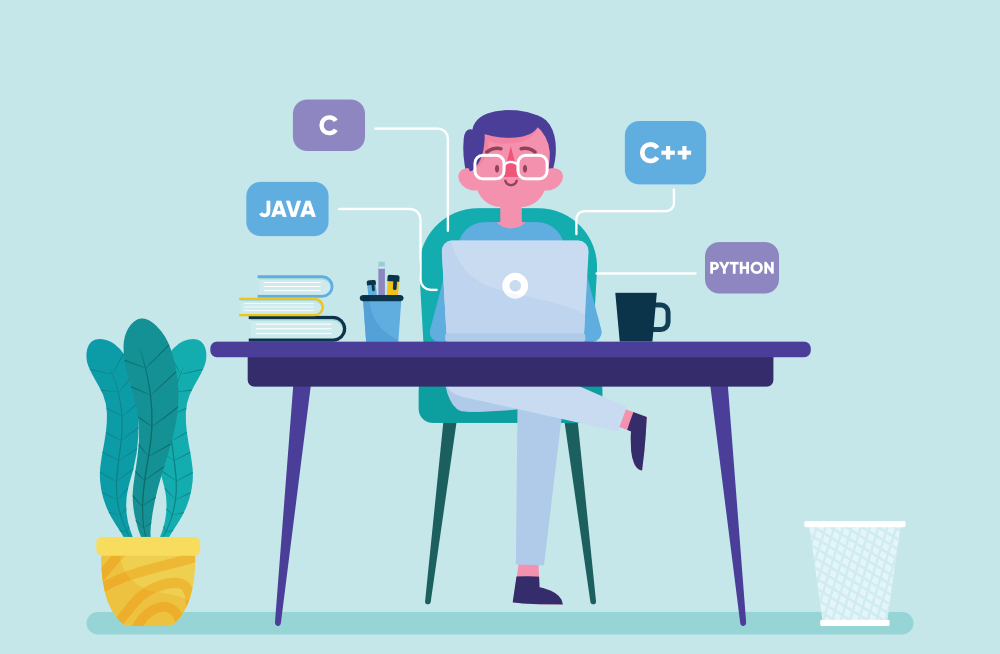 Now let us come to our main point. Every single one of those jobs you heard about was in one way or the other related to computer programming. Here’s the harsh truth. There is a little scope of good placements in the core sector. We are not saying that it does not exist. But you need to be really good at what you do.
Most of the people in the core sector look for jobs in the IT sector since they are so many. Being a great programmer is the need of the hour. If you excel at programming, that naturally places you ahead of your peers by miles.

Probably you know all this. Then what is the point of telling you all this?

It is because you don’t know where to start. There are simply too many languages to choose from and so many resources available online. So many resources do nothing but overwhelm you.

The Boom of Programming Languages

The market is full of languages you won’t be able to count upon your fingers. There is the quintessential C/C++, there is that geeky Java, there is every developer’s apple of the eye Python, and the underrated guns like Ruby and Go.
With so many languages to choose from, how do you ideally begin with your journey into this fascinating world of programming? A nice question indeed. But unfortunately, the answer is not so straightforward.

First of all, let us keep aside all the relatively new languages such as Rust, Swift and Julia. They might seem appealing to you at a first glance keeping in mind their really cool names, but they are not recommended for a beginner.

Why’s that? It is not because these languages are hard or something complex. No. The reason why they are not recommended for a beginner is because of two reasons.

The potential and viable options we are left with are C/C++, Java or Python. Sorry, we do not consider HTML to be a programming language. Let us break it down. Maybe you have already learned one of these languages in your high school, but to be honest, it does not matter. For those who haven’t, let me tell you that people who already know a language are not particularly at an advantage as compared to you. Let us be honest here. The way programming is taught in schools is not the most efficient way to learn programming.

So What to Choose?

You might hear people saying that it is a subjective choice. Choose with whatever you feel like. Though this advice is not wrong, it does nothing but confuses an already confused individual. We will layout the scenarios in front of you. Choose the language according to your scenario.

So, here is the bottom line. Do figure out which category do you belong to and begin your journey to be a great programmer. No matter which language you pick up, just stick to it and don’t abandon it midway. Devote your time and energy to it and see it showering you with success.

My Personal Notes arrow_drop_up
Previous
Which Programming Language to Choose?
Next
I Can't Use Logic In Programming. What Should I Do?
Recommended Articles
Page :
Which Programming Language to Choose?
13, Mar 18
How Should a Machine Learning Beginner Get Started on Kaggle?
11, Nov 19
UI vs UX Design : Which Career Option Should You Choose?
07, Jun 19
Centralized vs Distributed Version Control: Which One Should We Choose?
24, Aug 19
GATE or GRE - Which One Should I Choose?
19, Feb 20
AWS vs Azure - Which One You Should Choose?
14, Sep 20
Flask vs Django - Which Framework Should You Choose?
12, Mar 21
Kotlin vs Java - Which One Should I Choose For Android Development?
25, Jul 22
Which Database You Should Choose For Web Development?
27, Jul 22
Which Version Control System Should I Choose?
01, Sep 22
How to Choose a Programming Language For a Project?
26, Sep 20
7 Common Programming Mistakes That Every Beginner Must Avoid
27, Oct 19
Which language should you learn first if you want to make an app?
11, Oct 18
Why You Should Choose React Native?
05, Feb 19
10 Reasons Why You Should Choose Python For Big Data
03, May 20
Beginner Tips for Learning Python
04, Apr 19
Wireframe in UX Design - A Beginner's Guide
05, Apr 21
The Ultimate Beginner's Guide For DSA
17, Jun 22
How to Write a Powerful Resume 2022 (Beginner’s Guide with Examples)
18, Jul 22
How to Write a Perfect Resume as a Fresher in 3 Steps (Mini Beginner's Guide)
14, Aug 22
8 Best Ethical Hacking Books For Beginner to Advanced Hacker
29, Aug 22
Which Linux distribution shall I choose?
21, Nov 17
Hybrid Apps vs Native Apps | Which one to choose?
14, Aug 18
Which Operating System to Choose For Web Development?
19, Feb 22
Article Contributed By :